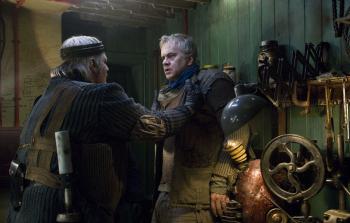 One of the most thrilling family films that Hollywood has released in recent memory, “City of Ember” is masterfully adapted by director Gil Kenan, from the Jeanne DuPrau novel of the same name. It’s colorful and exciting; puzzling and at times scary; has great music and graphics; and carries a universal message of freedom.

The main characters Lina Mayfleet (Saoirse Ronan) and Doon Harrow (Harry Treadaway) are living in the once glittering and shining City of Ember—located deep underground, and powered by a gigantic generator. The residents of this once spectacular city now live in constant fear that one day the generator, which has been shutting down periodically, will stop working for good.

However, Lina and Doon are not satisfied with this doomed prospect and start looking for a way out for themselves and their nears and dears.
The winding plot takes us down the dark tunnels inhabited by threatening creatures. The sets were skillfully engineered to portray a crumbling civilization, and the costumes fittingly look both retro and rugged. Supporting roles are well-drafted and masterfully performed by Bill Murray (a failed and greedy mayor of the City of Ember), Tim Robbins (Doom’s father and a private inventor and explorer), Martin Landau (a persistent and reliable plumber), and MacKenzie Crook (a perfectly sleazy and hideous crook).

The story is essentially utopian in theme, and apart from providing good-quality entertainment and laughs, it also teaches a lesson of what happens if we remain passive in the face of dangers and lies.

During a recent press-conference actors discussed the script and their participation in the film. Tim Robbins commented: “For me, it was more about that spirit of the human being that finds a way to survive in the midst of the direct circumstances…that there are some people that can still hope when others aren’t and that if they believe in it enough, anything is possible.”

Bill Murray spoke of his preparation for the role of un unscrupulous mayor. “So, I just thought of when you’re most disappointed is when you talk the talk and you don’t live up to it. And that’s pretty much what he did. So I felt like as long as I was really, really successful in talking the talk, that the disappointment would be there.”

Saoirse Ronan had much praised for the film’s crew. “It was great for me to work in Ireland being an Irish person, being around an Irish crew who, I thought, were second to none.”