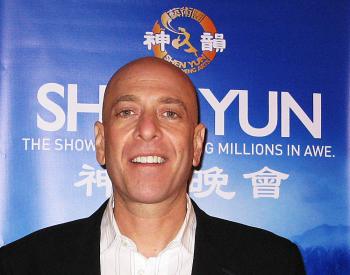 Mayne Berke, a production designer and movie producer who worked on the films Ninja Turtles, SWAT, Princess Diaries, and Rock Star, to name a few, came to see Shen Yun in Los Angeles on July 8. (The Epoch Times)
Arts & Culture

Mayne Berke works in the film industry as a production designer and movie producer. He has worked on Ninja Turtles, SWAT, Princess Diaries, and Rock Star, to name a few. He was in the audience to experience the splendor of New York-based Shen Yun Performing Arts.

Mr. Berke said, “I loved it. I thought it was very innovative. It was uplifting, and it was very educational.”

Mr. Berke was impressed with how all aspects of the show came together to tell a story. “I love the traditional movement. I love the way the movements worked in with the costumes, particularly the fabric—the extended arms and the colors and all that spinning. I think the use of costumes and movement and integration of the two was phenomenal,” he said.

“I loved the Chinese music, and it was really nice to finally see the two-stringed instrument [the erhu] be played. I’ve heard it my whole life but never actually got to see one.

“I’ve always known that sound, but I’ve never understood what instrument it emanated out of, and now I’ve gotten to see it.”

Speaking of the solo vocalists, he said, “Fantastic voices! Unbelievable sustenance of voice, rich and deep, and obviously a very high standard. I was very impressed, actually. It was wonderful to see in some cases just how powerful the human voice can be. And the passion was fantastic. It was wonderful!”

Mr. Berke worked in live theater for 10 years as an art director and then moved into film while working on his master’s degree at NYU. He has collaborated on numerous projects with Robert Stromberg, an Academy Award winner for Best Achievement in Art Direction for his work on Avatar.

With reporting by Lu Rusong