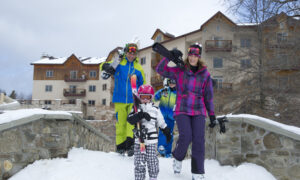 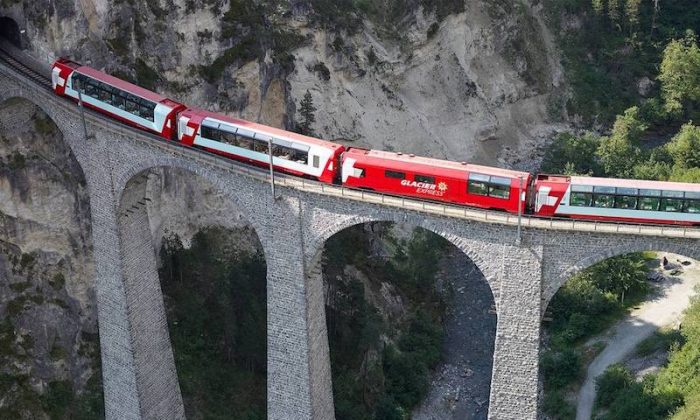 The Glacier Express on the Landwasser Viaduct near Filisur. (ST/swiss-image.ch/Franziska Pfenniger)
Destinations

Mountain Hopping in Switzerland Aboard the Glacier Express

GENEVA—I’m often asked if I have a favorite travel destination, and my answer is always the same: Switzerland. My love affair started decades ago when I became enamored by this country’s rich history, diverse topography, and international vibe. While I had always found the Swiss Travel System the best way to explore the country, I never had the opportunity to take a ride on their Glacier Express—until now.

Arguably one of the most spectacular train rides in the world, the Express winds its way through the Swiss Alps past towering canyons, deep river valleys, and forested hills. With an average speed of 24 miles per hour, this is perhaps the world’s slowest express train but one that is definitely worth the wait.

My excursion would take me from the mountain villages of St. Moritz to Zermatt, traversing more than 180 miles across 291 bridges and through some 91 tunnels. Along the way, we would gain and lose elevation from a high of 6,706 feet at Oberalp Pass to a low of 2,067 feet in the Rhine Gorge.

Boarding the familiar red wagon car in St. Moritz, I made my way to my assigned seat in the panorama car, which offered the most expansive views through the large windows. The seat was quite comfortable, and each one had its own small table for dining.

An audio narration of noteworthy sites was provided through earphones to each passenger in multiple languages. Along the way, I passed through three Swiss cantons, including Valais, Uri, and, Graubünden, before reaching Zermatt with its spectacular views of the Matterhorn.

The entire journey would take a little over eight hours, which, at first, sounded long. However, the trip was so visually engaging, I hardly noticed the passage of time.

The Appeal of the Glacier Express

I was curious how a specialty railway such as the Glacier Express, which for many is a once-in-a-lifetime experience, was perceived by both the passengers and the staff. Our train attendant, Fabian Hess, took some time to sit and chat with me, relating his perception of why this express train is so popular.

“Travel is emotion,” he said, “The whole world meets on the train.”

In his three years on board, Hess has met people from almost every nationality around the world, including Thailand, Saudi Arabia, and Finland. During one particular trip, a passenger on a group tour from China who had never seen snow started to cry when it came into view. Hess said it wasn’t long before the entire group was weeping from happiness at the white brilliance of the sun reflecting off of the snow.

Another passenger, Jane Martin from Melbourne, Australia, was spending her vacation riding the rails. “I saw this express train on TV and decided to try it,” she said. “I just love everything about train travel [and] meeting new people, and this one goes slow enough so I can take pictures.”

After departing St. Moritz, where Alpine winter tourism was born in 1864, we started to descend into a UNESCO World Heritage Site known as the Rhaetian Railway in the Albula and Bernina Landscapes. Our attendant pointed out the Landwasser Viaduct with six curved limestone archways as the train soared above the valley at a height of 213 feet—a marvel of Swiss engineering. Constructed in 1902, the main pillars required 320,000 cubic feet of masonry. What is even more remarkable was that the entire project was completed without any scaffolding, using only two cranes.

We made a short stop in Chur, the oldest town in Switzerland and located in the canton of Graübenden, to pick up passengers. The historic quarter, with its meandering alleys and picturesque squares, is a great place to explore.

Continuing our descent, we came to one of the lowest points on our route, the Rhine Gorge at 2,067 feet. Known as the Swiss Grand Canyon, the gorge affords a spectacular view with its deep river valley floor framed by majestic granite canyon walls. Over time, the river has carved its way through a prehistoric rock slide, creating a large ravine. Today, it is a popular location for rafting, hiking and of course, train travel.

In the village of Disentis, home to the largest Romansh-speaking population in Switzerland, I spotted a distinctive black and white, double-spired church. The monastery here dates from 1683 to 1695, making it the oldest Benedictine abbey in the country.

The Alpine scenery was starting to make me hungry, and fortunately, my reservation included a freshly prepared, three-course lunch. I had a moving visual feast to enjoy while I dined on a mixed salad, pork cooked with sherry, vegetables, and for dessert, a rich chocolate cake.

From here, our engine started pulling us up to the Oberalp Pass, the highest point on our trip at 6,706 feet above sea level. Due to the steepness of the terrain, the train uses an ingenious cogwheel system that engages the tracks for better traction during the climb. The deep blue skies and rocky, jagged, snow-capped peaks contrasted starkly with the green-laden forested hills at lower elevations.

Our final leg ended in the mountain village of Zermatt. Winding our way up the mountain again through a patchwork of green forests and craggy rock faces were awe-inspiring and made me feel quite small in the presence of nature’s breathtaking beauty.

As we approached Zermatt and a view that defies description, the Matterhorn revealed itself.

The majestic mountain, at 14,692 ft., is the town’s iconic fixture. I was instantly transported back to my childhood where the number one attraction at Disneyland was a ride on the Matterhorn. Bobsleds on tracks would whisk you around the mountain as you screamed in sheer delight, but this was nothing compared to the real thing.

While the Anaheim version was truly exciting as a child, it can’t really compare to actual mountain. With its steep angles, clouds swirling around the summit, and colorful hues, it is simply breathtaking. Apparently, this was what inspired Walt Disney, who was a frequent visitor to Zermatt, to create his own bit of Alpine wonderment at his California amusement park.

After experiencing the Glacier Express for myself, I think my friend Fabian Hess was right: Travel is emotion. Seeing Switzerland’s mountains, valleys, farmlands, and villages invigorated my soul. Its sights, sounds, and colors all converge where the world meets on a train.

The author was a guest of the Swiss National Tourist Office.