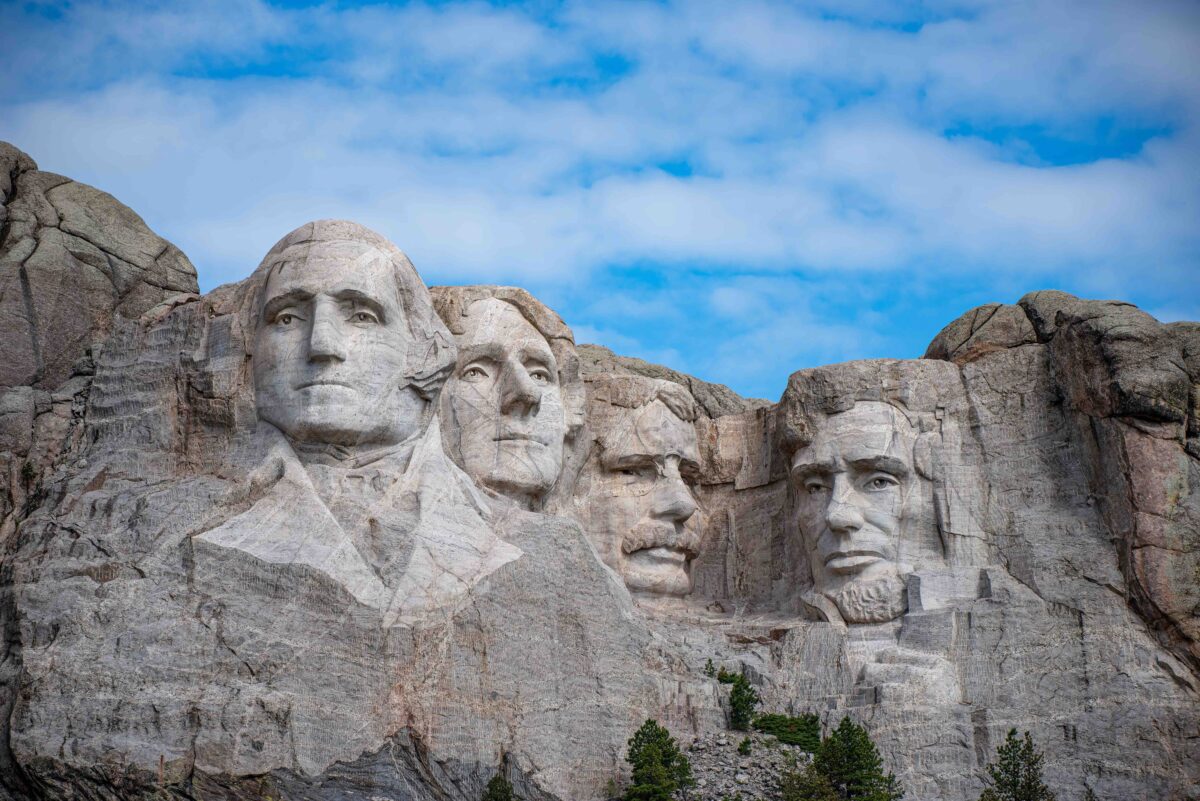 Mount Rushmore: The Story Behind How This Iconic Monument Came into Being

A plane buzzed over the Black Hills of South Dakota in the summer of 1927. It swooped and dove through the air, entertaining President Calvin Coolidge and his family below. The pilot dropped a wreath of flowers to this little crowd and sped away.

The Coolidges had chosen the large Game Lodge in Custer State Park as their summer retreat, where they tried to keep a quiet schedule. However, an ambitious sculptor nearby had other ideas.

Gutzon Borglum needed to promote his planned colossal historic art sculpture on Mount Rushmore. A visiting president seemed too great an opportunity to pass up.

Borglum had hired the pilot to fly by the president’s Summer White House in an attempt to convince Coolidge to make a speech at Rushmore, and he was rewarded for this effort. On a bright, sunny August day, Coolidge faced a large crowd gathered at Mount Rushmore to announce the start of Borglum’s project.

“The union of these four Presidents carved on the face of the everlasting hills of South Dakota will constitute a distinctly national monument. …Here in the heart of the continent, … the people of the future will see history and art combined to portray the spirit of patriotism,” Coolidge proclaimed. “If coming generations are to maintain a like spirit, it will be because they continue to study the lives and times of the great men who have been leaders in our history and continue to support the principles which those men represented. It is for that purpose that we erect memorials.”

Coolidge’s grand purpose for the memorial matched perfectly with Borglum’s vision for what his giant sculpture should be.

The Men on the Mountain

Doane Robinson is known as the “Father of Mount Rushmore.” He loved history and he loved South Dakota. While serving as the state’s historian, Robinson decided that South Dakota’s granite would provide an excellent place for a historical sculpture that could attract people to his state and generate revenue.

The eminent sculptor Lorado Taft declined the job because of poor health, so Robinson reached out to Borglum about the idea. The charismatic Borglum came to South Dakota in 1924 to find the perfect site for this project of a lifetime.

Borglum was a controversial man with many faults, but none of those faults involved thinking too small. “My one great desire as a boy was to rebuild the world—and I have never outgrown it,” he said.

Borglum chose to carve Washington first. As leader of the Continental Army and the first president, Washington represented the founding of the United States. His face was completed in 1930.

Because of the Louisiana purchase and his authorship of the Declaration of Independence, Borglum believed Jefferson signified the growth of the country. His first attempt to carve Jefferson failed, so instead of placing him on Washington’s right as originally intended, Borglum carved him on Washington’s left.

Abraham Lincoln was next. As one of Borglum’s heroes, he had even named his son Lincoln. He had also previously created several sculptures of the 16th president for various commissions before carving him on Mount Rushmore. Lincoln represents the preservation of the nation because of his leadership during the Civil War.

Theodore Roosevelt may be the most controversial of Borglum’s subjects, but Borglum knew Roosevelt personally and enthusiastically supported him throughout his entire political career. Because of Roosevelt’s role in the economics of the country, including the building of the Panama Canal, he was included to represent the development of the United States.

Mount Rushmore was declared complete in October 1941, seven months after Borglum’s death following complications from surgery. During construction, monetary struggles had constantly plagued the endeavor. However, Borglum and the men who believed in his talent saw the project through. After the sculptor’s death, Lincoln provided the leadership to complete his father’s massive dream.

This historic monument remains an object of controversy for Native Americans today. In 1948, a Lakota elder, Henry Standing Bear, commissioned sculptor Korczah Zilolkowski to begin carving a competing sculpture out of a mountain 17 miles from Mount Rushmore. The Crazy Horse Memorial remains unfinished, but dwarfs its Rushmore rival by 27 feet.

The Hall of Records

In addition to the faces carved on the front of Mount Rushmore, Borglum’s vision included a Hall of Records. “You may as well drop a letter into the world’s postal service without an address or signature, as to send that carved mountain into history without identification,” Borglum said. His solution to this identification problem was the Hall of Records.

Borglum’s original ideas for the hall were much grander than what exists at the mountain today. In 1938 and 1939, crews excavated a tunnel in the mountain for the hall, but Borglum was then ordered to halt that construction and finish his work on the faces.

Though he never completed the hall, in 1998 Borglum’s vision was partially fulfilled when a repository of records was placed in the tunnel he had excavated. This repository is now composed of panels inscribed with information about Mount Rushmore and a brief history of the United States. Borglum intended his carvings to last for generations, and the repository helps to ensure that the meaning of the memorial and the identities of the men he carved will never be lost.

We erect memorials to remember the past. Borglum’s greatest hope for his masterpiece was that it would remind Americans of the great men who had built their nation and who would continue to inspire generation after generation.

“This colossus is our mark. Cut in the backbone of this western world, high in the heavens, fearless we have carved it, defying the elements,” he wrote. “I am assured that these carvings will endure as long as the Rocky Mountains endure.”