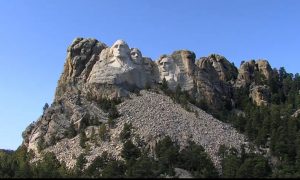 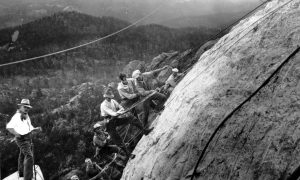 75 Years of Mount Rushmore, a Boon for Tourism, Creativity
0 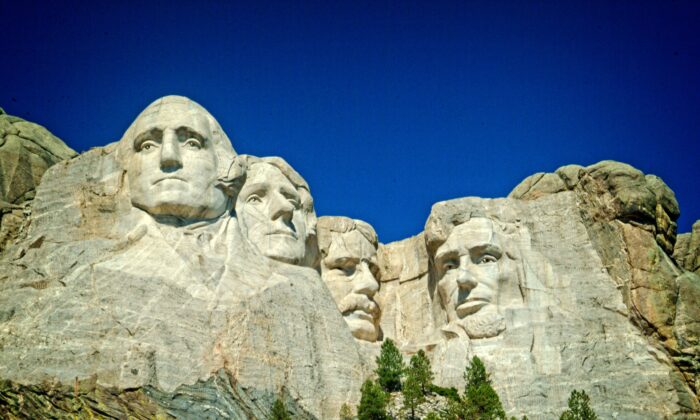 Mount Rushmore National Memorial is the greatest work of American sculptor Gutzon Borglum, who thought of it as “the formal rendering of the philosophy of our government into granite on a mountain peak.” (Copyright Fred J. Eckert)
Destinations

If you think the pictures that you’ve seen of Mount Rushmore National Memorial make it look imposing and inspiring, you should see it in person.

You may have seen pictures of it all your life, but that still doesn’t prepare one for the powerful impact that it has on visitors. Driving around a bend in the Black Hills of South Dakota, not far from Rapid City, and suddenly seeing it come into view—just part of it, just the massive face of George Washington—I was so taken that I pulled over to the side of the road and just stared at it awhile before finally getting around to taking out my camera.

Half an hour later, standing on the viewing platform and looking up at George Washington, Abraham Lincoln, Thomas Jefferson, and Teddy Roosevelt towering over the Black Hills from a lofty 5,675 feet, I had the same sort of feeling of awe that I had when I first stood in front of such imposing sights as the Pyramids, the mysterious giant statues of Easter Island, the Taj Mahal, or the Great Wall of China.

Except, of course, that at Mount Rushmore, you stand in awe of more than merely what man can build. Certainly, the structure itself is awe-inspiring, but what the great American sculptor and patriot Gutzon Borglum envisioned and built is something more than a monument or memorial.

It is, as he intended it to be, a shrine to freedom and American greatness. He thought of it as “the formal rendering of the philosophy of our government into granite on a mountain peak.”

He meant for viewing it to be a moving experience that would help inspire or reinforce in the visitor the very thing that drove him to create it—love of this country.

The Idea That Became a Shrine

The idea that became this shrine sprang from the mind of South Dakota’s state historian Doane Robinson in the early 1920s. He wanted to promote tourism and boost the state’s economy by building a gigantic monument somewhere in the Black Hills to heroes of the West, perhaps Lewis and Clark, perhaps frontiersman John C. Fremont; he wasn’t sure who.

In 1924, Robinson brought Gutzon Borglum to South Dakota to look into possible sites. At the time, Borglum was sculpting a huge portraiture parade of Robert E. Lee and his Confederate soldiers on Stone Mountain, Georgia, a project others would complete because Borglum was outed as a racist. That seems to be little known and hasn’t—and shouldn’t—detract from the obvious truth that all four leaders who grace Mount Rushmore are truly great Americans who served the country wonderfully.

Although Mount Rushmore is the work for which he’s now most remembered, Borglum was already a highly acclaimed sculptor, the man who had created, among other great works, the first piece of American sculpture purchased by New York City’s Metropolitan Museum of Art and the figures of the Twelve Apostles that appear in the city’s Cathedral of St. John the Divine. For many years before Robinson contacted him, he had been focusing on work that his scholarly wife Elizabeth described as showcasing “the emotional value of volume.”

An intensely patriotic son of Mormon Danish immigrants who was born in Idaho in 1867, Borglum not only found the perfect site but also turned the idea away from that of a narrower regional monument into that of making a shrine to American greatness, as exemplified by some of our country’s greatest leaders.

Washington was his first choice—leader of our military in the War of the Revolution, “Father of Our Country,” first U.S. president, and more than anyone else the symbol of the founding of the American republic.

Abraham Lincoln was a special hero of Borglum’s (he named his son Lincoln). He had already done some highly acclaimed Lincoln sculptures, including the enormous Lincoln bust that stands in the U.S. Capitol building and the huge sculpture of a sitting Lincoln that stands in front of the courthouse in Newark, New Jersey, a work that Lincoln’s son Robert called “the most extraordinary good portrait of my father I have ever seen.”

So, his second choice of the great man who preserved the American union was also an easy decision.

And also was the third choice, Thomas Jefferson, who was chosen because he was the president who moved America westward with the Louisiana Purchase and, of course, because he authored the Declaration of Independence.

That was it—three great leaders to symbolize America.

But as the project got underway, it became well-known that there was room for a fourth and soon there was much public discussion of whom to select, if anyone should be added.

The president of the United States in those days, Calvin Coolidge, enjoyed vacationing at nearby Custer State Park, and he was not only very interested in the Mount Rushmore project but also adamant about which great American should be the fourth. Some argued that Coolidge’s choice had served as president too recently, the same argument some now use against adding Ronald Reagan, but Borglum happily added a man whom he had admired and who had been his friend—Teddy Roosevelt.

The sheer size of Borglum’s Mount Rushmore sculpture is stunning. The scale is such that if Washington were carved head to toe, his height would be 465 feet. Washington’s face is 60 feet chin to forehead, his nose 20 feet, his eyes 11 feet wide, his mouth 18 feet wide. The small mole on Lincoln’s face is 16 inches across.

Making the Most of Your Visit

To make the most of a visit to the site, bear in mind that Borglum positioned the figures to take full advantage of natural overhead daylight. He deliberately picked a peak facing southeast so the figures would receive direct sunlight throughout most of the day. So don’t worry about seeing it lit up at night; that’s nice, too but actually, it’s much better to view it as it was designed to be viewed, in the daylight.

Arrive early not only to avoid crowds, but also because it is usually best viewed and photographed in morning light.

Take advantage of the opportunity to learn about this remarkable achievement by visiting the information center, the Lincoln Borglum Museum, and the Sculptor’s Studio. You’ll learn, for example, how Borglum created models sized to a ratio of one model inch equaling one foot on the mountain and then transferred model to mountain using the “pointing machine” that he created.

You’ll also learn about the history of the great project, why he chose this particular site, and how the sculptor invented new ways to use dynamite and pneumatic hammers to carve through stone much more quickly.

When you look at the old pictures of workmen poised high up on the mountain walking along scaffolds, climbing ladders, and swinging around in baskets and harnesses, what will probably greatly surprise you is that during the entire 14 years of work on it (only six of which were spent on actual carving) not one person was killed or even seriously injured.

Don’t look at it only from the Grand View Terrace; for closer-up and interesting different angle views, also take a walk along the not very long and easy to walk Presidential Trail and take a drive along some different roads in the area to catch still more interesting angle views.

Looking up at this great American masterpiece, what you wouldn’t likely realize is that it is an unfinished work.

Borglum had intended to finish the figures down to waist level and include details such as hands and period clothing. But he died in March 1941 and his son, Lincoln, who had been working with him throughout, supervised the completion of the heads, stopping work just weeks before the United States was attacked at Pearl Harbor and entered World War II.

Certainly, most Americans would share Gutzon Borglum’s prayer that this great American shrine bearing the likenesses of Washington, Lincoln, Jefferson, and Roosevelt “will endure until the wind and the rain alone shall wear them away.”

Guidebooks: “Mount Rushmore & The Black Hills” is a good choice. If traveling elsewhere in South Dakota or North Dakota, you might want to add “The Dakotas Off The Beaten Path.”