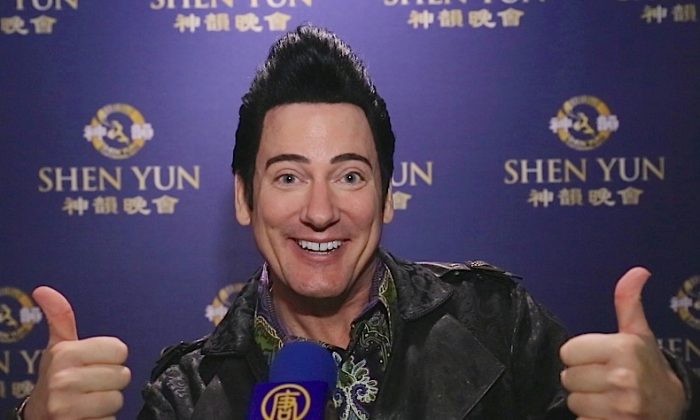 COSTA MESA, Calif.—”I think it’s a wonderful way to understand ancient Chinese culture, and to just be transported to another time and another place, and to have your heart filled with joy,” said motivational speaker Bill Russ, also known as “Retro Bill,” after attending a sold-out performance of Shen Yun Performing Arts at the Segerstrom Center for the Arts on Jan. 31.

Bill Russ is a popular children’s safety, self-esteem, and anti-bullying expert who dresses up as a 1950s-style character named ‘Retro Bill.’ He has been featured on television and radio shows internationally and is currently the most in-demand K-12th grade student assembly speaker in the United States and Canada. He has also hosted National Kids Day in front of the White House in Washington D.C. and has instructed law enforcement officers and school teachers worldwide on effective ways to educate and connect with school children of all ages.

“I love it,” he said of Shen Yun. “Everybody should see this show. It’s awesome, the costumes, the choreography, the dancers, the joy, and the live musicians—which is very unusual in itself. It’s just wonderful.”

Shen Yun was established in 2006 with a mission to revive 5000 years of true Chinese culture, which was once considered a gift from the heavens, according to the non-profit company’s website.

Mr. Russ, who is also a writer, director, producer, actor and artist, was absolutely amazed at the energy, effort, and compassion that went into the Shen Yun performance and authentically portraying the ancient art form known as classical Chinese dance.

Mr. Russ praised the performers’ dedication and passion for their art.

“What I really love about the dancers in this show is you can really see that they have real joy for what it is they’re doing. They’re really passionate, and I love that. They’re not just going through the motions. They’re just filled with joy.”

“I haven’t noticed one moment, one performer, where they’re not giving it everything,” he went on, and he agreed that was the best way to live. “Always give your all, just like in life. Give your very best. Give the goodness that you have, give your energy, and again, give your joy. That is what this show is.”

According to Shen Yun’s website, “Sophisticated dance techniques, an orchestra joining instruments from both the East and West, beautiful costumes, and a stunning back drop—this is Shen Yun at first glance. But digging deeper, one discovers a sea of traditional Chinese culture.”

During thousands of years of Confucian, Taoist, and Buddhist teachings, Chinese culture generated a rich and profound system of values. “The five cardinal virtues of benevolence, righteousness, propriety, wisdom, and faithfulness are all products of these three religions’ teachings,” states the website. “Shen Yun seeks to revive these virtues the world over.”

Mr. Russ said the performance could help everyone understand where they came from, who they are, and why they are what they are. He also appreciated the universal truths celebrated in Shen Yun, such as goodness, compassion, and kindness.

“The show has had me in tears, it’s had me with a smile on my face, it’s had me at moments wishing everyone could see this show all throughout the world, and it had me just giving gratitude that shows like these are being produced these days.”

He said he hoped Shen Yun would help bring a Chinese cultural renaissance. He enjoyed both the ancient fables and legends and the modern stories, saying the performance was truly unique.

“Bring the family, bring your friends, bring your parents, bring everybody, because it’s joy,” he said. “Go see it. Wherever you are in the world, go see it.”