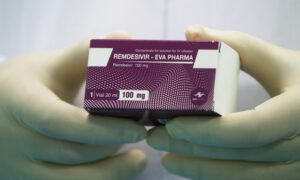 No Treatments Recommended for COVID-19 Patients Without Supplemental Oxygen: NIH
0 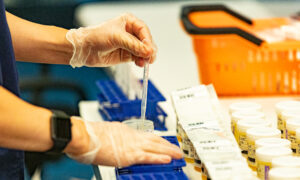 A UK mother is sending a warning message to parents with young children to watch out for danger signs if their children are having trouble breathing, after her daughter almost died during a bronchial infection.

The mother from Surrey, England, Emma Woodland, 38, noticed that her daughter Bonnie was making “strange breathing noises” on Dec. 12.

She took Bonnie in to get her cough and cold checked out, but doctors sent her back home saying it was likely just a virus.

Less than 24 hours later, Bonnie was in the hospital and on life support.

Bonnie had bronchiolitis and a condition called sepsis, which is when the body’s immune system starts attacking the body.

Woodland said she noticed Bonnie was breathing strangely in the morning and called for an ambulance. Paramedics decided to take her in to the hospital after seeing that her oxygen levels were a little low.

In a warning to friends on Facebook, Woodland said she was shocked that within just an hour of being at the hospital, Bonnie turned from a happy, smiling baby to not being able to breathe. She cautioned parents to be aware of the signs of sepsis and Bronchiolitis, and to get help if they see any of the symptoms in their children.

“Please if you have any doubts with your child or baby’s breathing, anything at all, then don’t hesitate to call an ambulance,” she wrote.

“Even if it the smallest snuffle or gasp, then get them to A&E [accident and emergency department].”

Little Bonnie was transferred to St. George’s hospital in London where she was put in intensive care.

After a week in the hospital, she was discharged and is doing well, Woodland says.

“Thank goodness for us that the paramedics had made that decision to ‘run her up there as there’s no harm in getting her looked over’ because we know for sure if they hadn’t we would be writing a whole different post right now.”

After doing a little research on Bronchiolitis, Woodland says she didn’t realize how dangerous it can be to young children.

“If like me, I never even knew that Bronchiolitis could kill a child?” she wrote.

“You here[sic] about meningitis, measles, mumps and rubella all being serious childhood illnesses but no body tells you about Bronchiolitis and after speaking with other parents and doctors it is more common than I ever realised especially at this time of year.”

Bronchiolitis is an infection of the lungs that causes an inflammation in the bronchioles, the smallest airways that carry oxygen to the lungs.

The ailment is often the result of a virus, and usually develops during the winter months. Symptoms can include:

-Slight fever (but not always)

-An ear infection in some infants

There is no cure for bronchiolitis, but it usually goes away of its own accord within a few weeks, according to the Mayo Clinic.

It’s not clear why sepsis occurs, but it happens when the immune system stops fighting an infection and starts attacking the body instead. In some cases it can result in tissue damage and organ failure, and in the worst cases, death, according to the Sepsis Alliance.

Young children and those with a weak immune system are most vulnerable to sepsis.

There is no cure for the condition, but early detection can prevent it from becoming deadly. Symptoms in children can include:

-Little or no urine output

-Skin that is cold to the touch

While the Woodland family’s story had a happy ending, a family from Manchester lost their 3-year-old daughter, who had Pneumonia, to Sepsis. The girl’s father is now on a mission to raise the profile of the potentially fatal ailment.

You can read his story here.

While it’s good to know the symptoms of sepsis and bronchiolitis, Woodland’s final piece of advice in her Facebook post is to “always go with your instinct…”

Her message obviously resonated with people. Her Facebook post got over 3,200 reactions, 5,875 shares, and 1,600 comments after nearly a month of being posted.