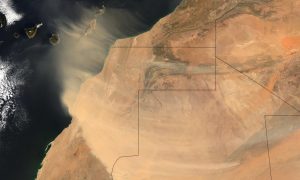 The Sahara Desert is known for its heat and sand, but it is also home to a remarkable geological feature. The Richat Structure, also known as the Eye of the Sahara, is a nearly 30-mile-wide formation that NASA says “forms a conspicuous bull’s-eye in the otherwise rather featureless expanse of the desert.”

Located just southeast of the highest summit in Mauritania, the rocky terrain rises more than 600-feet over the surrounding desert.

While some scientists had hypothesized that the circular Eye was created by a meteor strike, many now believe it is the result of a geological uplift being eroded by the environment. Sturdier rocks have remained high while softer areas have become depressed.

According to NASA, the distinctive structure is “a landmark for shuttle crews.”