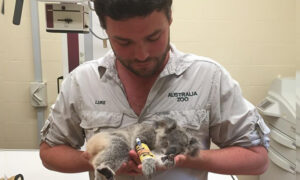 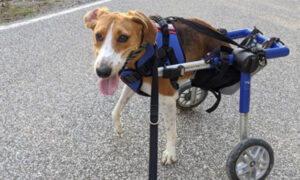 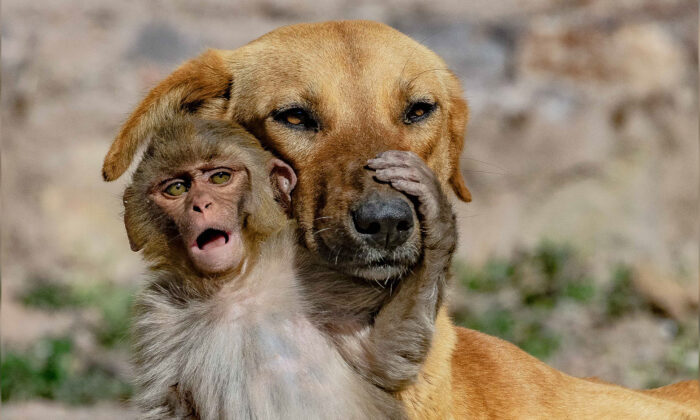 A photographer in the northern Indian state of Himachal Pradesh witnessed an unusual, yet extraordinarily heartwarming, scene of a pregnant dog with a lone baby monkey.

It was believed that the tiny monkey was an orphan, and that its parents were poisoned by locals in order to protect their crops. A heavily pregnant dog then apparently took it upon herself to “adopt” the parentless baby monkey as her own.

Indian photographer and Forest Department worker Prakash Badal, 48, photographed the baby ape cuddling and playing with the soon-to-be mother as though she were its own mother. The mother dog, meanwhile, appears to enjoy the baby monkey’s company.

“The monkey infant seemed to be about 10 days old when locals poisoned the adult monkeys because it is said they are destroying their crops,” Badal told Caters. “This infant survived and the dog adopted it.”

Badal, who is from Shimla, found himself in the village of Chakki Mod in the district of Solan, initially planning to photograph birds. Upon discovering the interspecies adoption scene, he shot several photos and video-recorded the animals, and they later garnered media attention.

The touching photos clearly betray the pregnant dog’s maternal instincts as she cuddles the baby ape. She allows the monkey to groom her, hug her, and play about and on top of her, as baby monkeys tend to do with their own mothers.

“Although sometimes there are conflicts between monkeys and dogs, the relationship of a mother is more important,” Badal shared.

Then he added, “I felt that when a mother saw a baby who is very small and left alone and there is nobody to take care of him, the maternal instinct took the initiative to adopt a small baby even if it’s from different species.”

The nature photographer believes the rare interaction is something that humankind can learn from. “This type of relationship is a lesson for humans who have become selfish and kill each other just because he is from another cast or religion,” he shared.