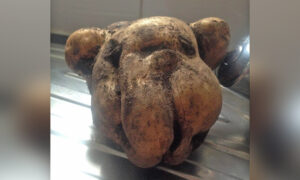 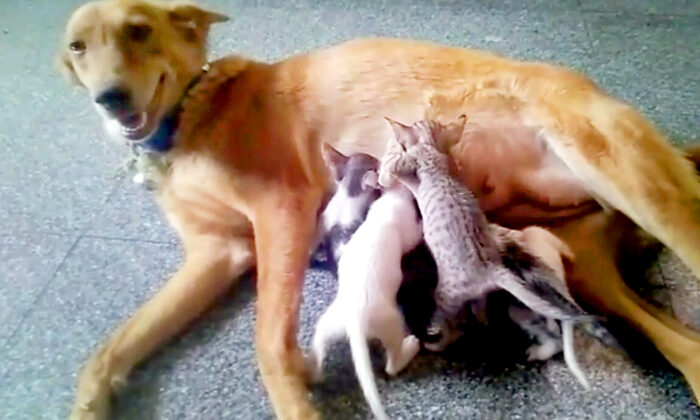 The Prakash family of Kavithala town in south India owned the mother cat. They say their pet was stolen from their home in April, according to Opera News.

The mother’s disappearance presented a huge problem since the kittens were too young to take milk from a bottle.

The Prakash family’s dog, Champa, had just given birth to two puppies in February and still had milk.

When the kittens started going hungry because their mother had vanished, Champa decided to “adopt” the five tiny cats and breastfeed them herself, amazingly.

A dutiful mother, Champa does more than just feed the kittens. She also grooms them and keeps a watchful eye on the infant cats to make sure they don’t stray too far.

The kittens are taken with their adoptive mother, too; they play with her as though she’s their real cat mom.

At first, the family said they were leery about letting a dog care for such small kittens and worried that she might accidentally harm them. But after keeping a close eye on their interactions for a few days, it became clear that Champa is gentle and treated them just like her own babies.

Many neighbors have dropped in to catch a glimpse of the canine with a feline litter, NTD Television reported.

In the wild, it isn’t unusual for animals to adopt abandoned babies of another species. In some cases, predators even adopt the infants of their prey and raise them as their own.

It’s a phenomenon that may, in fact, be unique to mammals, who seem especially attuned to the cries of infants in need.

According to Nature World News, biologists Susan Lingle and Tobias Riede tested the responses of mother deer to the cries of infants from several different species.

Researchers tested the reactions of wild Canadian mule deer to recordings of infant distress calls. They were astounded to discover that mother deer responded with apparently equal concern to the cries of a variety of species, including infant fur seals, puppies, kittens, and even human babies.

“These are calls that are generally made in a life-or-death situation,” said Lingle.

In the case of Champa and her adopted litter, death was certainly a real possibility, and the mother dog’s decision may have saved the lives of all five kittens.