Mother and Daughter Thoroughly Enjoy All Aspects of Shen Yun 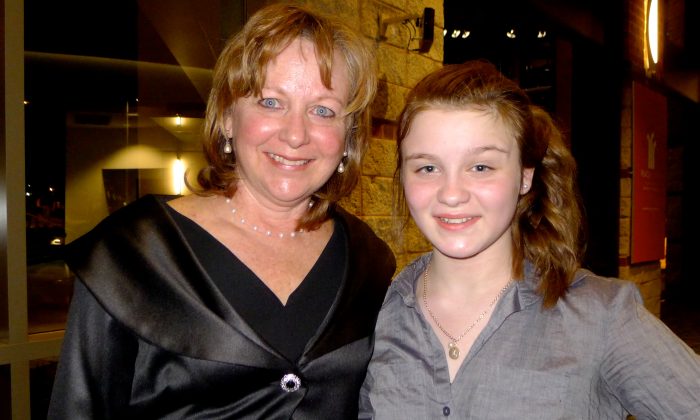 Barbara Rheney with her daughter Lauren at the Shen Yun performance at the Peace Center for the Performing Arts in Greenville, South Carolina. (Epoch Times)

GREENVILLE, S.C.—Barbara Rheney, a manager at a local law office, and her daughter, Lauren, attended the Shen Yun performance at the Peace Center for the Performing Arts in Greenville, South Carolina on May 1. They thoroughly enjoyed all that the grand performance had to offer.

Ms. Rheney was particularly impressed with the backdrop and the high skills of the dancers.

“I thought it was incredible, the use of the backdrop, and how they integrated the film into the live action. I thought that was really neat! The skill of the dancers was incredible,” she said.

As someone who grew up in a musical family and plays several musical instruments, Ms. Rheney’s attention was caught by the erhu, the Chinese two-stringed instrument often referred to as the Chinese violin.

“That was fascinating. I grew up in a musical family … so, it was interesting. I enjoyed that.”

The Shen Yun orchestra combines classical Western musical instruments with traditional Chinese instruments to produce a unique sound that has moved audiences around the world.

“They had such amazing costumes, and it was just really pretty to watch.”

“They [the dancers] were really good, and the symphony [orchestra], was really good because it matched the tone of what they were dancing to. I really liked that,” she said.

“I couldn’t say it any better than that,” she said.

Tonhu Tram is an energy healer who attended the Shen Yun performance at Peace Center on May 2.

Ms. Tram is originally from Vietnam and has been sensitive to energy her whole life. She says she studies and does a lot of energy healing and related work. She also does meditation and has a spiritual background.

She said she was touched by the Shen Yun number The Divine Renaissance Begins where the Buddha comes out to save people from impending disaster.

“Oh yea, that whole scene is like touch my heart. And it is something really special, [it] just really touched me,” she said.

To Ms. Tram, the Shen Yun performance had a spiritual feeling for her. She was surprised by the energy she sensed, especially when watching the number The Power of Compassion.

“But it is very interesting when I feel the first performance of the Falun Dafa dance, you now, the one with the Buddhas showing.”

“I actually feel a huge [sensation] of energy. So I am like, where [is] the energy coming from?” she said.

As well as ancient legends, Shen Yun portrays contemporary tales of courage. Ms. Tram was interested about one piece where practitioners of Falun Dafa—a traditional meditation practice—demonstrate compassion when faced with persecution, since she is somewhat familiar with the practice of Falun Dafa.

“I have been to the Falun Dafa website, and I listened to the lectures … but I haven’t really started the practice,” she said.

“And so, maybe I should go back and start,” she said.