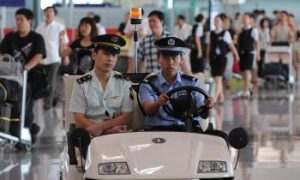 Mother and Daughter Impressed by Spirituality of Shen Yun

TAINAN, Taiwan—Ms. Wang Pei-Han, manager of eCosway, came to Shen Yun Performing Arts International Company’s performance at Tainan on April 13 with her daughter, Huang Rou-Chi. It is the second time they have seen Shen Yun.

Ms. Wang was touched by the show. “I am interested in beautiful things. The colors used in Shen Yun’s performance are so fabulous and beyond description. I am so impressed!” Ms. Wang said.

Her daughter, Huang, loved the costumes and the dance. She loves flowers and was impressed with the use of fans in one of the dances. “The program Plum Blossom exceeded my expectations! I would have never thought that fans could be used to show the beauty of flowers. The colors are brilliant and so was the dance.

"I really want to wear the artists’ costumes. They are so beautiful!”

Ms. Wang mentioned that she was impressed with the spirituality displayed in the show. “I truly believe in Gods and Buddhas. I saw them protecting mankind when the tsunami hit in the last program The Opening of Heaven’s Gates."

Huang said, “The show tells us to have kind thoughts and to act accordingly. The principles of Truth-Compassion-Tolerance teach us how to behave when facing conflicts and tribulations. I want to know more about the ‘truth’ Shen Yun has been talking about."

Soprano Feng Ming performed the song The Divine Call to Help You. Two of the lines say,

Huang believes that “since people come from Heaven, they should eventually return. We must hold on to the belief in order to return,” she said.