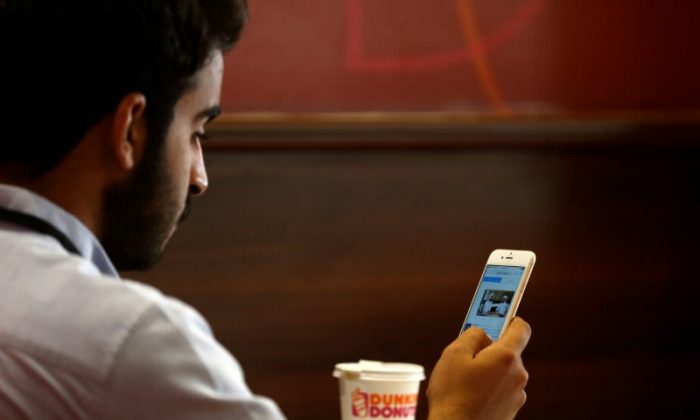 A Saudi man explores social media on his mobile device as he sits at a cafe in Riyadh, Saudi Arabia May 24, 2016. REUTERS/Faisal Al Nasser
Good to Know

Did your date check his email just as you were about to deliver a punch line? Did your friend reply to a text while you were describing your boss’ broadside? Is your child so engrossed in whatever she’s doing on her iPhone that you must ask her multiple times to please pass the salt?

And do you find yourself incapable of controlling an incessant urge to look at your smart phone or other electronic device?

Nearly nine out of 10 Americans report being so tethered to their digital gadgets that they constantly or often check their email, texts and social media accounts, a new poll shows.

“While we know that technology can be helpful in many ways, this need to be constantly connected could have negative consequences to our physical and mental health,” said Vaile Wright, a psychologist and a member of the team that designed the American Psychological Association survey.

“The information overload and notifications actually impair our ability to concentrate. They make us less productive. They make us feel not really present. So people report feeling disconnected from others,” she said in a phone interview.

Nearly one-fifth of Americans identified technology as a significant source of stress, according to the survey of more than 3,500 adults living in the U.S.

Even when those who described themselves as constant checkers were with family members, 44 percent reported feeling disconnected.

The problem may stem from the addictive nature of digital devices.

Nearly two-thirds of those polled strongly agreed that periodically unplugging from digital devices would boost their mental health. But only 28 percent said they actually took digital holidays.

The problem may stem from the addictive nature of digital devices.

“Our access to our technology, particularly our mobile technology, is very positively reinforcing,” Wright said. You ask a question, and the device immediately answers.

“And so we keep going back for more,” she said.

“If the idea of leaving your cellphone at home for a day causes panic, that’s important data that you might be more constantly connected to your device than you’re aware,” she said.

People who feel as though they’re going through withdrawal when they disconnect should consider a temporary physical separation, psychologists recommend.

“It’s actually important to not just rely on willpower,” Wright said. “If you’re out to dinner with your friends, keep your cellphone in your pocket or your purse.”

Psychologist Ethan Kross, a professor at the University of Michigan in Ann Arbor, said in a phone interview that the old adage, “out of sight, out of mind,” fits mobile technology well.

“If the cell phone is tempting you to check your email, take it out of your field of vision,” said Kross, who was not involved with the new study. “I wouldn’t underestimate the visual power of it.”

Smart phones “instantly activate the desire to check,” he said. Turn off sound notifications as well as vibrations and put the device into a desk drawer, or somewhere else you won’t see it, he suggested.

The real challenge is to figure out what are the healthy versus the harmful ways of interacting with these technologies.
— Ethan Kross

Though the pollsters only questioned adults, the double-edged sword of digital technology touches children as well. Almost half of surveyed parents reported that regulating their child’s screen time fueled a constant battle in their homes.

Wright recommends that parents consider low-tech options for amusing children in restaurants and on airplanes.

“One of our pieces of advice is don’t always reach for technology solutions to obtain good behavior,” she said. “You can bring a coloring book or a puzzle.”

“The real challenge is to figure out what are the healthy versus the harmful ways of interacting with these technologies. The hope is that we optimize how they influence people’s well being,” he said.

“Times are rapidly changing,” he said. “Things are evolving very quickly, and I think in some ways the science is playing catch-up here.”