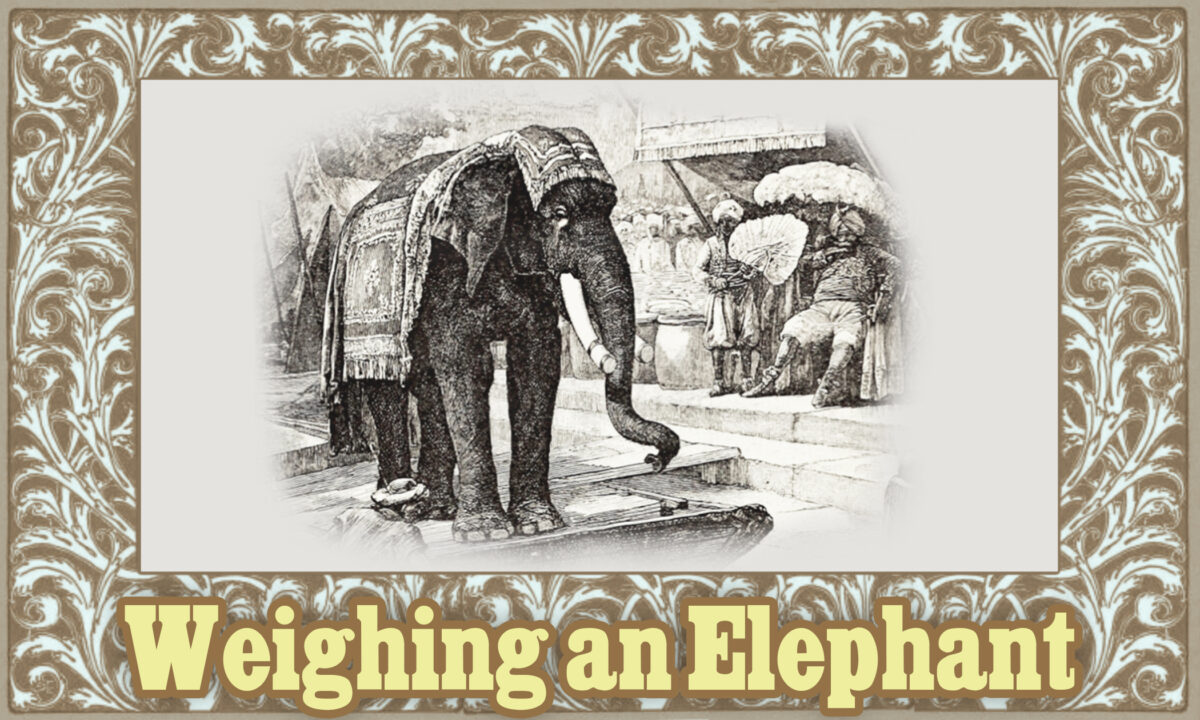 Moral Tales for Children From McGuffey’s Readers: Weighing an Elephant

This is the 11th installment in our McGuffey Readers series, in which we reproduce some of the best moral tales from the classic 1800s schoolbooks that sold an estimated 122 million copies by 1960, the largest circulation of any book in the world next to the Bible and Webster’s Dictionary. McGuffey’s Readers played an important role in American history, offering children not only lessons in reading, grammar, and spelling, but also in moral conduct and character. Enjoy, and share with your children!

“An eastern king,” said Teddy’s mother, “had been saved from some great danger. To show his gratitude for deliverance, he vowed he would give to the poor the weight of his favorite elephant in silver.”

“Oh! what a great quantity that would be,” cried Lily, opening her eyes very wide.

“But how could you weigh an elephant?”  asked Teddy, who was a quiet, thoughtful boy.

“There was the difficulty,” said his mother. “The wise and learned men of the court stroked their long beards, and talked the matter over, but no one found out how to weigh the elephant.

“At last, a poor old sailor found safe and simple means by which to weigh the enormous beast. The thousands and  thousands of pieces of silver were counted out to the people; and crowds of the poor were relieved by the clever thought of the sailor.”

“Stop, stop!” said Teddy. “I want to think for myself—think hard—and find out how an elephant’s weight could be known, with little trouble and expense.”

“I am well pleased,” said his mother, “that my little boy should set his mind to work on the subject. If he can find out the sailor’s secret before night, he shall have that orange for his pains.”

The boy thought hard and long. Lily laughed at her brother’s grave looks, as he sat leaning his head on his hands. Often she teased him with the question, “Can you weigh an elephant, Teddy?”

At last, while eating his supper, Teddy suddenly cried out, “I have it now!”

“Do you think so?” asked his mother.

“How would you do it,” asked Lily.

“First, I would have a big boat brought very close to the shore, and would have planks laid across, so that the elephant could walk right into it.”

“Oh, such a great, heavy beast would make it sink low in the water,” said Lily.

“Of course it would,” said her brother. Then I would mark on the outside of the boat the exact height to which the water had risen all around it while the elephant was inside. Then he should march on shore, leaving the boat quite empty.”

“Don’t you?” cried Teddy, in surprise. “Why, I should then bring the heaps of silver, and throw them into the boat till their weight would sink it to the mark made by the elephant. That would show that the weight of each was the same.”

“How funny!” cried Lily; “you would make a weighing machine of the boat?”

“That is my plan,” said Teddy.

“That was the sailor’s plan,” said his mother. “You have earned the orange, my boy;” and she gave it to him with a smile.