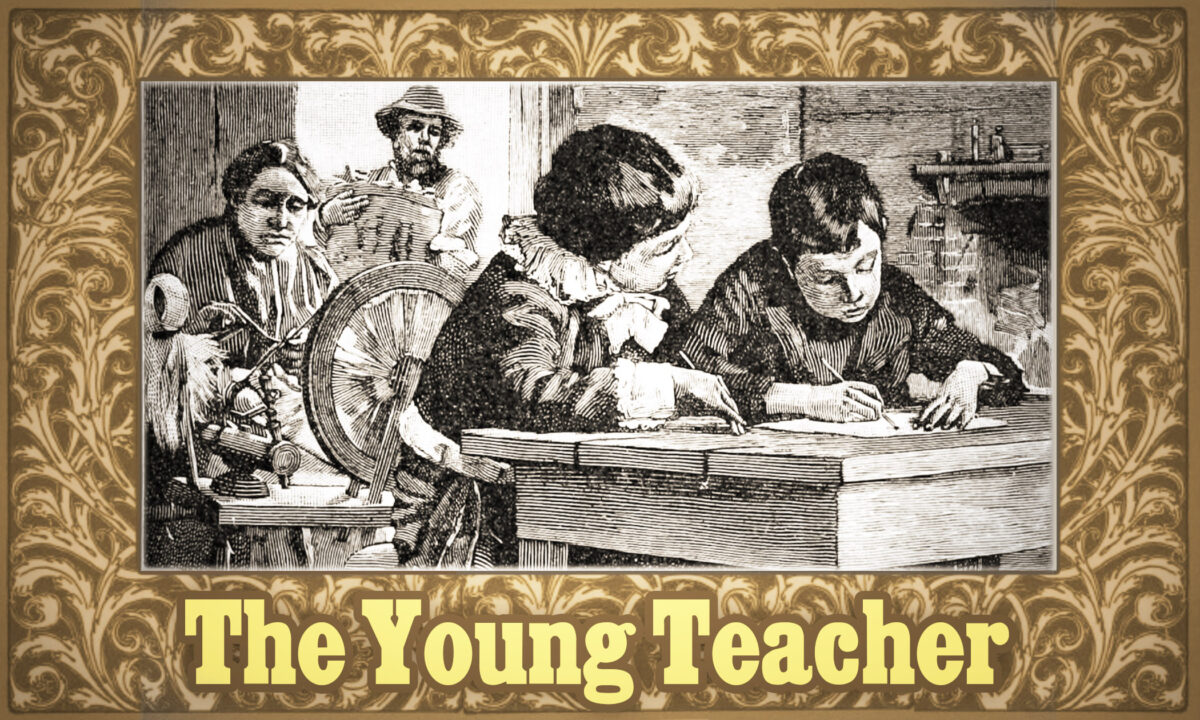 Moral Tales for Children From McGuffey’s Readers: The Young Teacher

This is the sixth instalment in our McGuffey Readers series, in which we reproduce some of the best moral tales from the classic 1800s schoolbooks that sold an estimated 122 million copies by 1960, the largest circulation of any book in the world next to the Bible and Webster’s Dictionary. McGuffey’s Readers played an important role in American history, offering children not only lessons in reading, grammar, and spelling, but also in moral conduct and character. Enjoy, and share with your children!

Charles Rose lived in the country with his father, who taught him to read and to write.

Mr. Rose told his son that, when his morning lessons were over, he might amuse himself for one hour as he pleased.

There was a river near by. On its bank stood the hut of a poor fisherman, who lived by selling fish.

His careful wife kept her wheel going early and late. They both worked very hard to keep themselves above want.

But they were greatly troubled lest their only son should never learn to read and to write. They could not teach him themselves, and they were too poor to send him to school.

Charles called at the hut of this fisherman one day, to inquire about his dog, which was missing.

He found the little boy, whose name was Joe, sitting by the table, on which he was making marks with a piece of chalk. Charles asked him whether he was drawing pictures.

“If I could only learn to read and write,” said he, “I should be the happiest boy in the world.”

“Then I will make you happy,” said Charles. “I am only a little boy, but I can teach you that.

“My father gives me an hour every day for myself. Now, if you will try to learn, you shall soon know how to read and to write.”

Both Joe and his mother were ready to fall on their knees to thank Charles. They told him it was what they wished above all things.

So, on the next day when the hour came, Charles put his book in his pocket, and went to teach Joe. Joe learned very fast, and Charles soon began to teach him how to write.

Some time after, a gentleman called on Mr. Rose, and asked him if he knew where Charles was. Mr. Rose said that he was taking a walk, he supposed.

“I am afraid,” said the gentleman, “that he does not always amuse himself thus. I often see him go to the house of the fisherman. I fear he goes out in their boat.”

Mr. Rose was much troubled. He had told Charles that he must never venture on the river, and he thought he could trust him.

The moment the gentleman left, Mr. Rose went in search of his son. He went to the river, and walked up and down, in hope of seeing the boat.

Not seeing it, he grew uneasy. He thought Charles must have gone a long way off. Unwilling to leave without learning something of him, he went to the hut.

He put his head in at the window, which was open. There a pleasant sight met his eyes.

Charles was at the table, ruling a copybook Joe was reading to him, while his mother was spinning in the corner.

Charles was a little confused. He feared his father might not be pleased; but he had no need to be uneasy, for his father was delighted.

The next day, his father took him to town, and gave him books for himself and Joe, with writing paper, pens, and ink.

Charles was the happiest boy in the world when he came home. He ran to Joe, his hands filled with parcels, and his heart beating with joy.