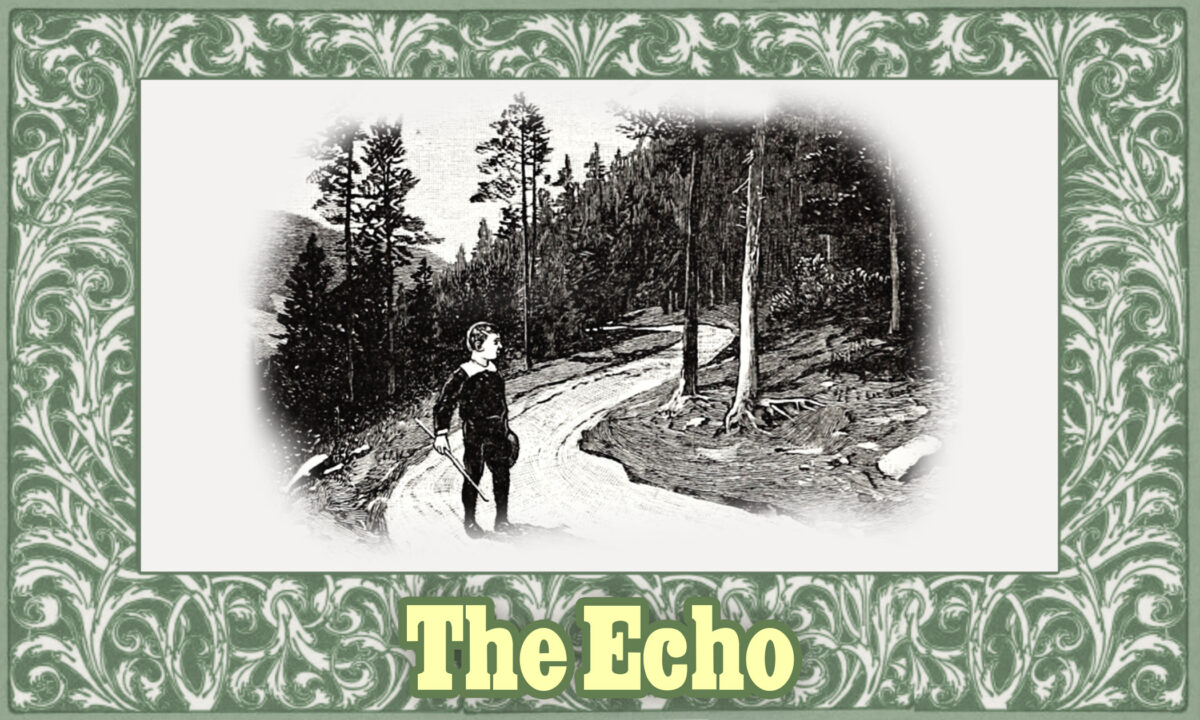 Moral Tales for Children From McGuffey’s Readers: The Echo

This is the 12th installment in our McGuffey Readers series, in which we reproduce some of the best moral tales from the classic 1800s schoolbooks that sold an estimated 122 million copies by 1960, the largest circulation of any book in the world next to the Bible and Webster’s Dictionary. McGuffey’s Readers played an important role in American history, offering children not only lessons in reading, grammar, and spelling, but also in moral conduct and character. Enjoy, and share with your children!

As Robert was one day rambling about, he happened to cry out, “Ho, ho!” He instantly heard coming back from a hill near by, the same words, “Ho, ho!”

Robert now cried out harshly, “You must be a very foolish fellow.” “Foolish fellow!” came back from the hill.

Robert became angry, and with loud and fierce words went toward the spot whence the sounds came. The words all came back to him in the same angry tone.

He then went into the thicket, and looked for the boy who, as he thought, was mocking him; but he could find nobody anywhere.

When he went home, he told his mother that some boy had hid himself in the wood, for the purpose of mocking him.

“Robert,” said his mother, “you are angry with yourself alone. You heard nothing but your own words.”

“I will tell you,” said his mother. “You know, when you play with your ball, and throw it against the side of a house, it bounds back to you.” “Yes, mother,” said he, “and I catch it again.”

“Well,” said his mother, “if I were in the open air, by the side of a hill or a large barn, and should speak very loud, my voice would be sent back, so that I could hear again the very words which I spoke.

“That, my son, is an echo. When you thought some one was mocking you, it was only the hill before you, echoing, or sending back, your own voice.

“The bad boy, as you thought it was, spoke no more angrily than yourself. If you had spoken kindly, you would have heard a kind reply.

“Had you spoken in a low, sweet, gentle tone, the voice that came back would have been as low, sweet, and gentle as your own.

“The Bible says, ‘A soft answer turneth away wrath.’ Remember this when you are at play with your school mates.

“If any of them should be offended, and speak in a loud, angry tone, remember the echo, and let your words be soft and kind.

“When you come home from school, and find your little brother cross and peevish, speak mildly to him. You will soon see a smile on his lips, and find that his tones will become mild and sweet.

“Whether you are in the fields or in the woods, at school or at play, at home or abroad, remember, The good and the kind,
By kindness their love ever proving, Will dwell with the pure and the loving.”