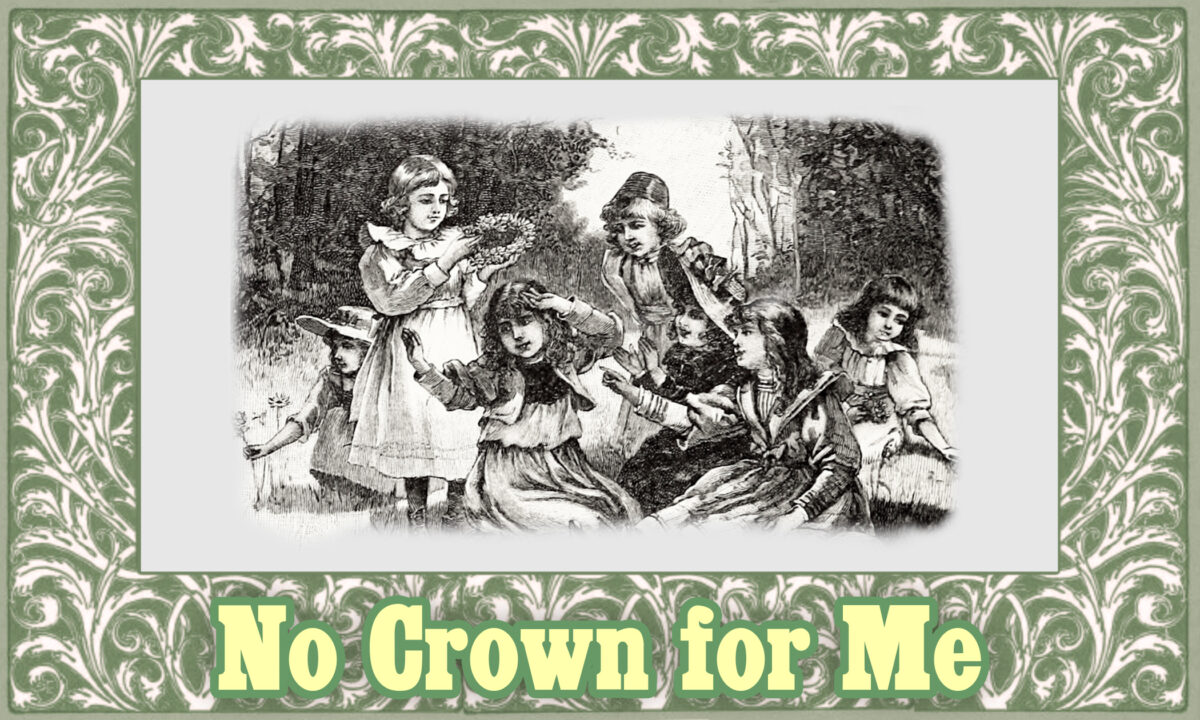 Moral Tales for Children From McGuffey’s Readers: No Crown for Me

This is the 15th installment in our McGuffey Readers series, in which we reproduce some of the best moral tales from these classic 1800s schoolbooks, which sold an estimated 122 million copies by 1960, the largest circulation of any book in the world next to the Bible and Webster’s Dictionary. McGuffey’s Readers played an important role in American history, offering children not only lessons in reading, grammar, and spelling, but also in moral conduct and character. Enjoy, and share with your children!

No Crown for Me

“Will you come with us, Susan?” cried several little girls to a schoolmate. “We are going to the woods; do come, too.”

“I should like to go with you very much,” replied Susan, with a sigh; “but I cannot finish the task grandmother set me to do.”

“How tiresome it must be to stay at home to work on a holiday!” said one of the girls, with a toss of her head. “Susan’s grandmother is too strict.”

Susan heard this remark, and, as she bent her head over her task, she wiped away a tear, and thought of the pleasant
afternoon the girls would spend gathering wild flowers in the woods.

Soon she said to herself, “What harm can there be in moving the mark grandmother put in the stocking? The woods must be very beautiful today, and how I should like to be in them!”

“Grandmother,” said she, a few minutes afterward, “I am ready, now.” “What, so soon, Susan?” Her grandmother took the work, and looked at it very closely.

“True, Susan,” said she, laying great stress on each word; “true, I count twenty turns from the mark; and, as you have never deceived me, you may go and amuse yourself as you like the rest of the day.”

Susan’s cheeks were scarlet, and she did not say, “Thank you.” As she left the cottage, she walked slowly away, not singing as usual.

“Why, here is Susan!” the girls cried, when she joined their company; “but what is the matter? Why have you left your dear, old grandmother?” they tauntingly added.

“There is nothing the matter.” As Susan repeated these words, she felt that she was trying to deceive herself. She had acted a lie. At the same time, she remembered her grandmother’s words, “You have never deceived me.”

“Yes, I have deceived her,” said she to herself. “If she knew all, she would never trust me again.”

When the little party had reached an open space in the woods, her companions ran about enjoying themselves; but Susan sat on the grass, wishing she were at home confessing her fault.

After a while, Rose cried out, “Let us make a crown of violets, and put it on the head of the best girl here.”

“It will be easy enough to make the crown, but not so easy to decide who is to wear it,” said Julia.

“Why, Susan is to wear it, of course,” said Rose: “is she not said to be the best girl in school and the most obedient at home?”

“Yes, yes; the crown shall be for Susan,” cried the other girls, and they began to make the crown. It was soon finished.

“Now, Susan,” said Rose, “put it on in a very dignified way, for you are to be our queen.”

As these words were spoken, the crown was placed on her head. In a moment, she snatched it off, and threw it on the
ground, saying, “No crown for me; I do not deserve it.”

The girls looked at her with surprise. “I have deceived my grandmother,” said she, while tears flowed down her cheeks. “I altered the mark she put in the stocking, that I might join you in the woods.”

“Do you call that wicked?” asked one of the girls. “I am quite sure it is; and I have been miserable all the time I have been here.”

Susan now ran home, and as soon as she got there she said, with a beating heart, “O grandmother! I deserve to be punished, for I altered the mark you put in the stocking. Do forgive me; I am very sorry and unhappy.”

“Susan,” said her grandmother, “I knew it all the time; but I let you go out, hoping that your own conscience would tell you of your sin. I am so glad that you have confessed your fault and your sorrow.”

“When shall I be your own little girl again?” “Now,” was the quick reply, and Susan’s grandmother kissed her forehead.