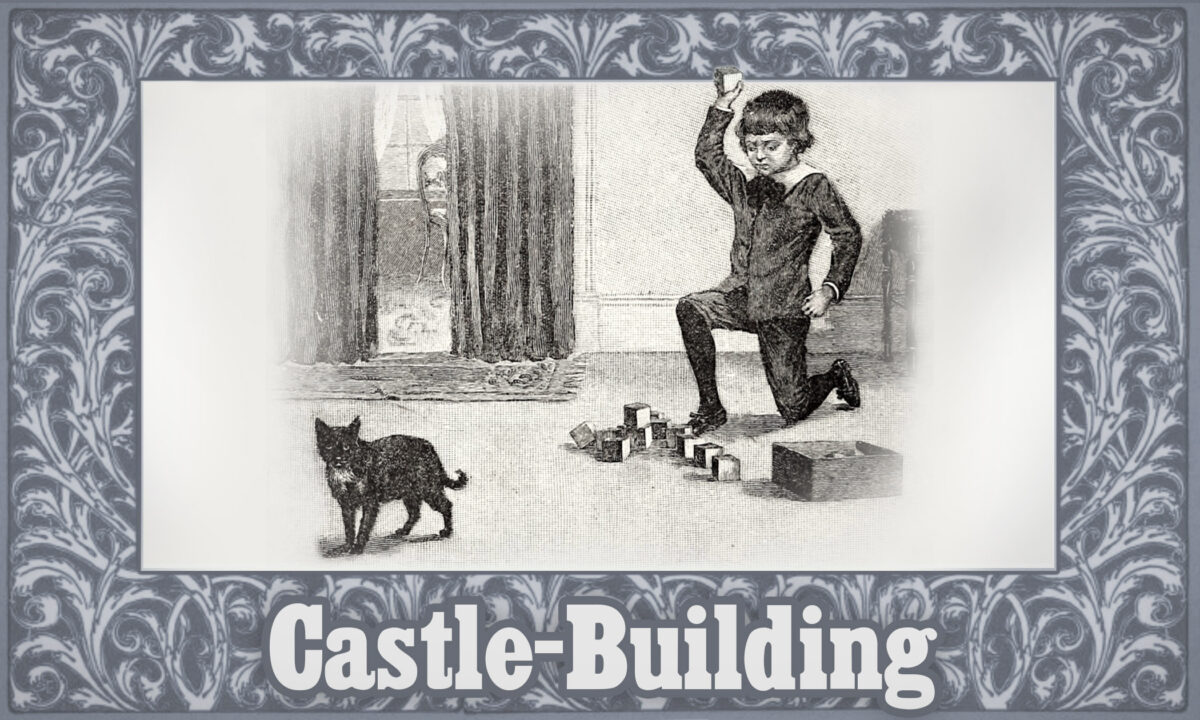 This is the fifth instalment in our McGuffey Readers series, in which we reproduce some of the best moral tales from the classic 1800s schoolbooks that sold an estimated 122 million copies by 1960, the largest circulation of any book in the world next to the Bible and Webster’s Dictionary. McGuffey’s Readers played an important role in American history, offering children not only lessons in reading, grammar, and spelling, but also in moral conduct and character. Enjoy, and share with your children!

“O pussy!” cried Herbert, in a voice of anger and dismay, as the blockhouse he was building fell in sudden ruin. The playful cat had rubbed against his mimic castle, and tower and wall went rattling down upon the floor.

Herbert took up one of the blocks and threw it fiercely at pussy. Happily, it passed over her and did no harm. His hand was reaching for another block, when his little sister Hetty sprang toward the cat, and caught her up.

Herbert’s passion was over quickly, and, sitting down upon the floor, he covered his face with his hands, and began to cry.

“What a baby!” said Joe, his elder brother, who was reading on the sofa. “Crying over spilled milk does no good. Build it up again.”

“What’s all the trouble here?” exclaimed papa, as he opened the door and came in.

“Pussy just rubbed against Herbert’s castle, and it fell down,” answered Hetty. “But she didn’t mean to do it; she didn’t know it would fall, did she, papa?”

“Herbert!” his papa called, and held out his hands. “Come.” The little boy got up from the floor, and came slowly, his eyes full of tears, and stood by his father.

“There is a better way than this, my boy,” said papa. “If you had taken that way, your heart would have been light already. I should have heard you singing over your blocks instead of crying. Shall I show you that way?”

Herbert nodded his head, and papa sat down on the floor by the pile of blocks, with his little son by his side, and began to lay the foundation for a new castle.

Soon, Herbert was as much interested in castle-building as he had been a little while before. He began to sing over his work. All his trouble was gone.

“This is a great deal better than crying, isn’t it?” said papa.

“Crying for what?” asked Herbert, forgetting his grief of a few minutes before.

“Because pussy knocked your castle over.”

“Oh!” A shadow flitted across his face, but was gone in a moment, and he went on building as eagerly as ever.

“I told him not to cry over spilled milk,” said Joe, looking down from his place on the sofa.

“I wonder if you didn’t cry when your kite string broke,” retorted Herbert.

“Losing a kite is quite another thing,” answered Joe, a little dashed. “The kite was gone forever; but your blocks were as good as before, and you had only to build again.”

“I don’t see,” said papa, “that crying was of any more use in your case than in Herbert’s. Sticks and paper are easily found, and you had only to go to work and make another kite.” Joe looked down at his book, and went on reading. By this time, the castle was finished.

“It is ever so much nicer than the one pussy knocked down,” said Hetty. And so thought Herbert, as he looked at it proudly from all sides.

“If pussy knocks that down, I’ll-”

“Build it up again,” said papa, finishing the sentence for his little boy.

“But, papa, pussy must not knock my castles down. I can’t have it,” spoke out Herbert, knitting his forehead.

“You must watch her, then. Little boys, as well as grown up people, have to be often on their guard. If you go into the street, you have to look out for the carriages, so as not to be run over, and you have to keep out of people’s way.

“In the house, if you go about heedlessly, you will be very apt to run against someone. I have seen a careless child dash suddenly into a room just as a servant was leaving it with a tray of dishes in her hands. A crash followed.”

“Yes, I believe it was, and I hope it will never happen again.”

Papa now left the room, saying, “I don’t want any more of this crying over spilled milk, as Joe says. If your castles get knocked down, build them up again.”