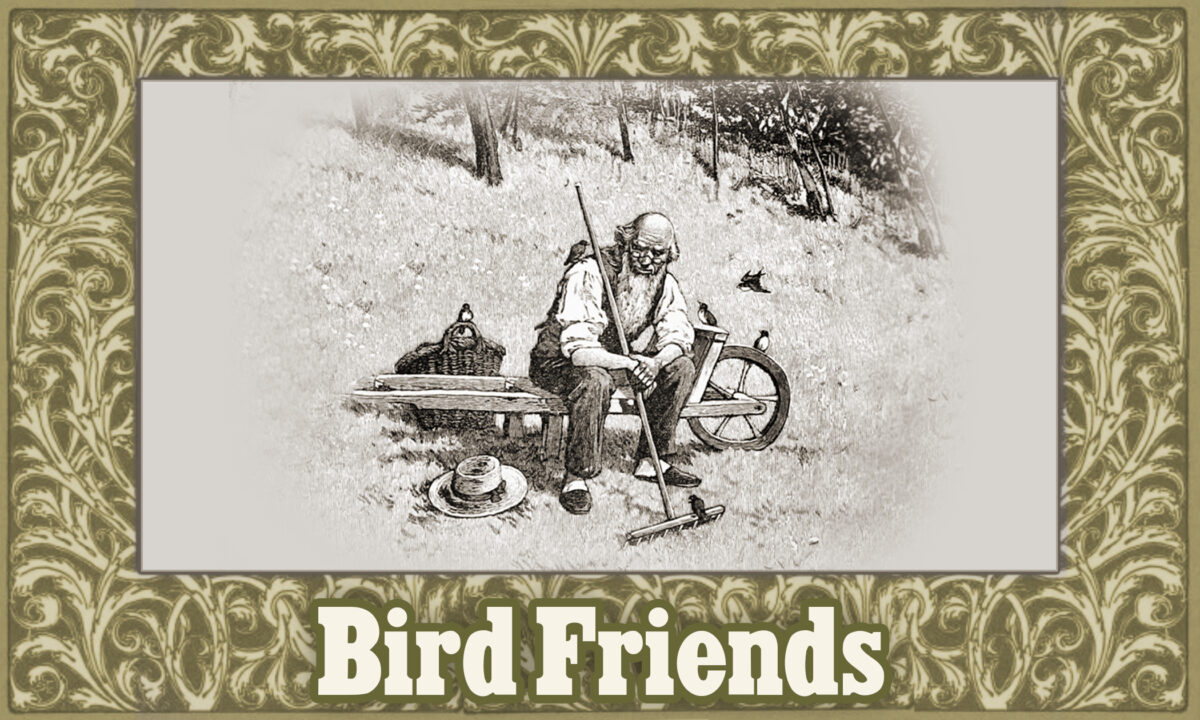 This is the eighth instalment in our McGuffey Readers series, in which we reproduce some of the best moral tales from the classic 1800s schoolbooks that sold an estimated 122 million copies by 1960, the largest circulation of any book in the world next to the Bible and Webster’s Dictionary. McGuffey’s Readers played an important role in American history, offering children not only lessons in reading, grammar, and spelling, but also in moral conduct and character. Enjoy, and share with your children!

I once knew a man who was rich in his love for birds, and in their love for him. He lived in the midst of a grove full of all kinds of trees. He had no wife or children in his home.

He was an old man with gray beard, blue and kind eyes, and a voice that the birds loved; and this was the way he made them his friends.

While he was at work with a rake on his nice walks in the grove, the birds came close to him to pick up the worms in the fresh earth he dug up. At first, they kept a rod or two from him, but they soon found he was a kind man, and would not hurt them, but liked to have them near him.

They knew this by his kind eyes and voice, which tell what is in the heart. So, day by day their faith in his love grew in them.

They came close to the rake. They would hop on top of it to be first at the worm. They would turn up their eyes into his when he spoke to them, as if they said, “He is a kind man; he loves us; we need not fear him.”

All the birds of the grove were soon his fast friends. They were on the watch for him, and would fly down from the green tree tops to greet him with their chirp.

When he had no work on the walks to do with his rake or his hoe, he took crusts of bread with him, and dropped the crumbs on the ground. Down they would dart on his head and feet to catch them as they fell from his hand.

He showed me how they loved him. He put a crust of bread in his mouth, with one end of it out of his lips. Down they came like bees at a flower, and flew off with it crumb by crumb.

When they thought he slept too long in the morning, they would fly in and sit on the bedpost, and call him up with their chirp.

They went with him to church, and while he said his prayers and sang his hymns in it, they sat in the trees, and sang their praises to the same good God who cares for them as he does for us.

Thus the love and trust of birds were a joy to him all his life long; and such love and trust no boy or girl can fail to win with the same kind heart, voice, and eye that he had.