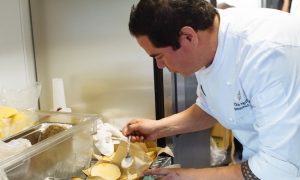 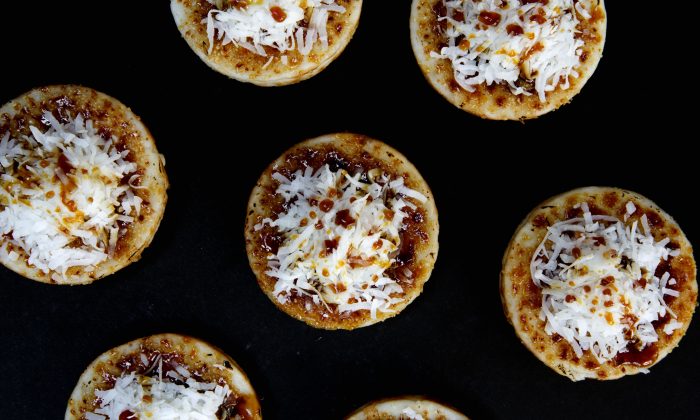 Nigel Sielegar and Wenny Purnomo, two cousins with backgrounds in design, started the street food business as a passion project
By Andrew Thomas

NEW YORK–At the Queens Night Market, held in Flushing Meadows Corona Park on Saturday nights, rows of vendors serve up a plethora of food and drink. Whether it’s dosas, fried ice cream, jerk chicken, or bubble tea, visitors are sure to encounter a diverse array of cuisine.

Nestled among the various stalls is one serving up something unique to the market and the city as a whole: Indonesian street food.

Cousins Nigel Sielegar and Wenny Purnomo are the charismatic duo behind Moon Man, which has been serving Indonesian street desserts at the market since April 2017.

Both Sielegar and Purnomo grew up in Indonesia, and came to the United States in 2002 and 2010, respectively. Neither have formal culinary training.

Sielegar is a graphic designer by profession, and is the principal of the award-winning studio Corse Design Factory and an adjunct professor at the School of the Visual Arts. Purnomo studied architecture, and has helped her husband run a restaurant in New Jersey since coming to the United States.

Little did they know they would end up starting a food business together.

A Taste of Home

When Sielegar and Purnomo arrived in New York, they each discovered it was difficult to find Indonesian food. It was the simple unavailability of their native cuisine that motivated them to start cooking it themselves.

They then quickly realized that there was a greater demand for Indonesian food, but nobody was filling it.

“It just grew from there, basically. It’s about us missing what we grew up with,” Sielegar told The Epoch Times.

The cousins got a spot at the Queens Night Market because it happened to be one of Sielegar’s clients. The market is also diverse, family-oriented, and community-driven, similar to the atmosphere in Asian street markets.

There is a $5–6 price cap for items sold by vendors, so the cousins knew they had make something both delicious and affordable. Thus, serving street food, as opposed to entree-sized dishes, just made sense.

After experimenting in a test kitchen, the cousins came up with a menu of three classic Indonesian treats, or what Sielegar calls “humble masterpieces”: coconut pancakes, steamed pandan cake, and baked cassava cake. A seasonal, rotating dish, which changes every few weeks, joins the core items.

Their most popular dish is their kue pancong, coconut pancakes made with a batter of freshly grated coconut, rice flour, and coconut milk.

The batter is then cooked in circular, three-inch-wide molds on a hot cast iron skillet, and topped with shredded coconut and gula jawa, Javanese palm sugar, which is quickly brûléed. Other toppings available include chocolate sprinkles, peanuts, and black sesame. The final result is a sweet and savory pancake that is crunchy on the outside and soft on the inside.

To make the pandan cake, the cousins chop up pandan leaves and blitz them in a blender with a bit of water, then strain the mixture to obtain pandan juice. This juice is combined with egg, flour, coconut milk, and sugar to create a pandan paste, which is then shaped into cakes and steamed until soft and spongy.

They can be topped with a variety of accouterments, including coconut paste, shredded coconut, and black sesame, but in the cakes themselves, the floral, sweet, and nutty flavors of pandan still shine through.

Patrons have responded well to the menu: Moon Man sells 1,000 units a night. During their first night at the market, they only had one cast iron skillet, and market-goers waited in line for hours, Sielegar recalled.

While most of their clientele is not Indonesian, the patrons who are get a sense of nostalgia every time they visit Moon Man, Sielegar said. He himself remembers that when he was growing up in Indonesia, there were vendors selling coconut pancakes in front of every elementary school.

Sielegar and Purnomo feel like they have a responsibility to preserve and represent their culinary heritage.

“On the one hand, it’s about preserving this heritage of Indonesian street food that is disappearing. Then the second thing is also we felt like Indonesian food was under-appreciated, and there’s so much potential in Indonesian food that people are not aware of,” Sielegar said.

The cousins have since expanded beyond the Queens Night Market; in 2018, they showcased their cuisine at approximately 40 different events.

In addition, they have signed a contract to open a permanent space at The Market Line, an expansive food hall on Manhattan’s Lower East Side, in late October. They’ll also continue to serve their delicacies at the Queens Night Market.

Before this year’s season ends, catch them every Saturday from 5 p.m. to midnight, Sept. 14 through Oct. 26, for a little taste of Indonesia.