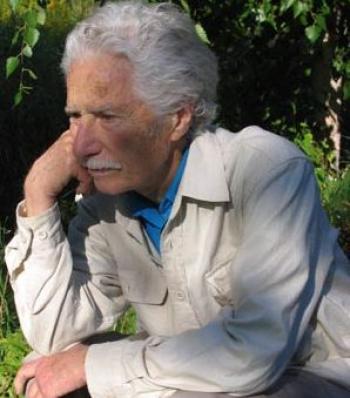 Molly A. Daniels-Ramanujan
View profile
Follow
biggersmaller
Print
Monty Berman is the doyen of EcoVillage; he is our éminence grise.

Monty says that being older has given him a sense of his own personal integrity and power. Yet he is the first to mention the challenges he faced along the way.

He was born in Brooklyn to a Polish family. He says his parents “were schizoid—not open to the reality of anyone else, including their two children.”

His earliest memory is still a mystery to him. He had never seen his father being violent, but he did see his mother and father at the sink, with blood from his mother’s face and his father wiping off the blood with a washcloth.

He says, “My mother spoke nothing of substance. Her main concern was keeping the house clean.”

His mother seldom spoke. She was the silent one, into cleaning house. When Monty went to work for his father at the factory, on the way in the car, his father appeared to be a nonstop monologist. He talked at Monty; he had no interest in anything his son might say.

Monty had to be silent like his mother. At the factory, Monty swept the floor and worked at the buttonhole machine.
Dinnertime was stressful; conversation was unknown in their family life.

Monty’s life changed for the better when he finally left home. For one thing, most astonishingly, he found new maternal and paternal voices as his reality instructors when he studied Carl Rogers’ Client Centered Therapy and when he studied Fritz Perls, the originator of Gestalt Therapy.

Both lived and taught in Chicago. Rogers proved to be an ideal mother, one who listened to others. Monty was doubly fortunate when he found the works of Fritz Perls. Perls became the paternal voice as in “Gestalt Therapy Verbatim.”

“Gestalt Therapy was challenging," Monty says. “I learned to interact with my environment, working from inside myself outward.”

Monty’s final three semesters at Goddard College were “life changers” for him. He learned the importance of self-study courses. He now uses a similar approach in his teaching at Empire State University and more recently at Tompkins Cortland Community College.

In Monty’s evolution, the hard-won moments of change taught him to listen to himself—to feel his own reality and to relate to others around him.

Dena Freed says, “Monty speaks his truth well and often; he is a master of self-discipline.” Élan Shapiro: “Monty’s commitment to being present, authentic, and true to himself is awe-inspiring.”

Monty has been married three times; his first ended after four years, the second and the third ten years each. Despite his life-long effort to get away from his early years with the help of new-reality instructors, and despite his valiant effort to steer clear of the script of each of his parents, Monty’s life story points to something universal: The ectoplasmic presence of our parents coming in as interference in even a good person’s life.

“This book is dedicated to the two humanistic psychologists who got me on the path to a decent life, Carl R. Rogers and Fritz Perls. Carl, the massive listener that he was, demonstrated the extent to which one could deeply attend to and hear another person, and Fritz, bless his challenging soul, opened up a whole new world for me, namely, the world of my experiencing self—which I have come to see as the absolute requisite for any possibility of being powerfully in the world."

I must add to the above, my own small voice to ask a question for us all: Can these methods change one’s unconscious self? Do we, you, and I, fall back unconsciously on one or the other of our twin polarities, our mother’s reality or our father’s?