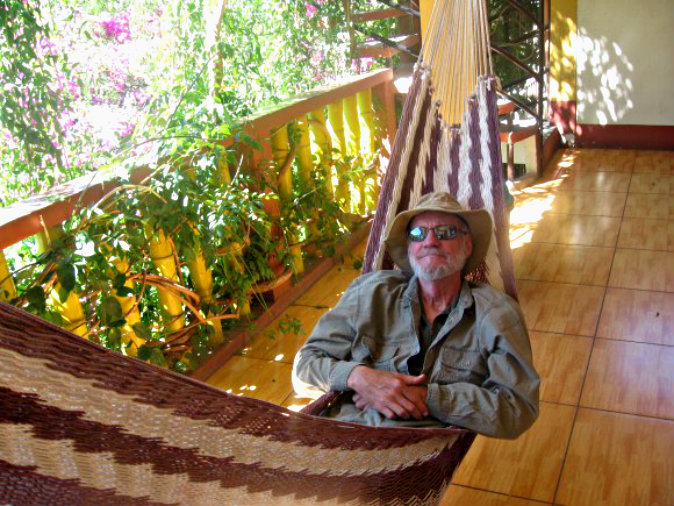 What I Don't Spend Money On
BY Gar Williams TIMEJanuary 28, 2015 PRINT

Reality check for those who are seriously thinking about a traveling retirement:

It is almost nine o’clock in the morning, it’s getting dark outside – that means it’s going to rain, again. Maybe I should say it’s going to rain some more. Yes, definitely rain. I hear fat drops hitting the tin roof of my casita now. I enjoy a nice rainy day when I can stay snugged up in a cozy little casita and don’t have to go out in it. The problem is that today I don’t have to go outside to be in the rain.

When I rented my $150 USD a month casita (utilities included) in Mexico what I didn’t know was that a crew of men would be arriving every morning at seven o’clock to build an addition on the back wall. When they get here, the first thing they do is rip off the roof along that wall. That includes the roof over the bathroom. So, it is hammering and banging all day long — including Saturdays and Sundays. That is bad enough but not the worst of it. The worst is when they knock off for the day they just half-ass put the roof back on. And this is the rainy season. It has been raining every night now for over a week and sometimes, like today, it rains in the daytime. I’ve got the trashcan and every other container I have set to catch the leaks but the floor is already two inches deep in the low spots. Looks like more broom work today.

I mention this about the casita because housing is one thing I don’t spend much money on. The less money I spend now, the faster my traveling money will build up for my next trip. I thought about moving but was assured by someone who has been here many years that any place I could get in the same price range would have similar problems – maybe worse. I hope that isn’t always true, because beginning in the middle of July I’ve got what appears to be a much nicer place lined up for about $185 USD a month. For those who don’t care to be this much in touch with local living conditions, for a hundred more a month (around $300 USD) there are much nicer places here with roofs that don’t leak.

In any case, this is just part of the cycle of the trip I am on: I sit still for a while to save money then spend that money to travel to the next destination. It works and is certainly not a boring strategy.

The Keys for Retiring to Travel

How Much Does it Really Cost to Travel the World

Housing cost is just part of the way I save money. The money I save on this is substantial, but there are other places where I save even more. Most of these saving have to do with insurance, taxes, and upkeep I don’t have to pay because I don’t own a house or an automobile. Last year, when I was thinking about a traveling retirement, one of the things I did to see if it was feasible was to make a list of the things I was paying either monthly or yearly that I wouldn’t have to pay if everything I owned fit in a backpack. It seems obvious to me now but at the time it was an eye opener. I no longer have that list so I can’t give exact figures but I can give some very close estimates.

Take, for instance, owning a house. Since I don’t own a house I no longer have to keep the house up. That saves a minimum of $600 a year. This is a very conservative figure. Just think what it would cost if a heater or air conditioner went out in your house? Another savings is termite insurance: $125 USD per year. Insurance on the house itself was about $2000 a year. Property taxes ran about $300 a year. Utilities were a minimum of $2400 a year. And I don’t even want to talk about the mortgage.

Then there is the other money pit: an automobile. Where I lived in the USA there was absolutely no public transportation — not even a rogue taxi. Owning an automobile was a necessity. Gasoline cost was a minimum of $1200 USD per year and that is with no out of town trips. Insurance was $350 per year which just covered liability, not the vehicle itself. Maintenance was another $200 a year. Add another $100 a year for tags and taxes. Then, there was depreciation. Some people don’t think of that as an expense but it is. I estimate that my vehicle was depreciating at a rate of $2500 per year.

Adding all this together (swiftly in my head) I get about $8800 a year that I no longer have to spend. If I count in what my mortgage was versus what my rent is now, you can add roughly another $7200 a year on to that for a grand total of $16,000. See now why I can afford to travel?

One other place I also save is on health insurance. I don’t have any. This is not as risky as it sounds. Healthcare in the USA costs at least twice as much as it does in England, which is next highest in the world. In Latin America, healthcare costs are less than my deductible was in the US.

Copyright © 2015 by Vagabond Journey Travel. This article was written by Gar Williams and originally published on www.vagabondjourney.com