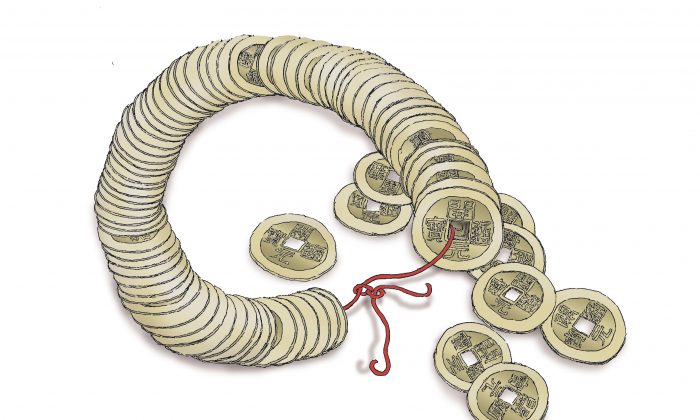 Money as a Herb

What if money were a herb? Zhang Yue, the author of “Money as a Herb”, was first appointed prime minister during the Kaiyuan era (713–741), which was the early half of the reign of Emperor Xuanzong of the Tang Dynasty.

Zhang Yue was made prime minister three times and was in officialdom for over 40 years. He followed the example of “The Divine Farmer’s Herb-Root Classic” and wrote a short and concise but exceptional essay, “Money as a Herb”, in his old age to treat social ills and the human mind.

He wrote: “Money is sweet, heaty (which stimulates the system), and poisonous. Yet it has anti-ageing properties and nourishes the skin. Money is good for treating hunger and cold, and it can get people out of difficult situations instantly.

“Money, though it is good for a country, corrupts capable and prominent figures, and fears those who are honest and honourable. It is best taken in moderation by greedy people, or the heat and dampness in their bodies will be thrown off balance, causing them to fall ill. There are no fixed harvest periods for money. Unscrupulous harvesting causes harm to one’s mental health.

“Being in vogue, money is offered to the gods in religious rituals and sent to ghosts and spirits by burning it. Amassing it without spending it attracts robbers and thieves. Spending it without keeping any leads to deprivation and destitution.

“Giving money to those in need as one accumulates wealth is being righteous. Not treating money as a treasure is being moral. Gaining wealth and giving it away in a decent and modest way is being ethical. Saying no to ill-gotten gains is conforming to etiquette. Using money to help people is being benevolent. Spending it in a responsible way and returning any loan on time is being honourable. Acquiring wealth without causing harm to oneself is being wise.

“Used in such a refined and discerning way, the herb can be taken on a long-term basis to increase longevity. Used in any other way damages emotions and corrupts the mind. Take note.”

Zhang Yue likened money to a herb and analysed the relationship between man and money from seven perspectives—righteousness, morality, ethics, etiquette, benevolence, honour, and wisdom. He arrived at the conclusion of how money should be used and gave a thorough and comprehensive account of it.