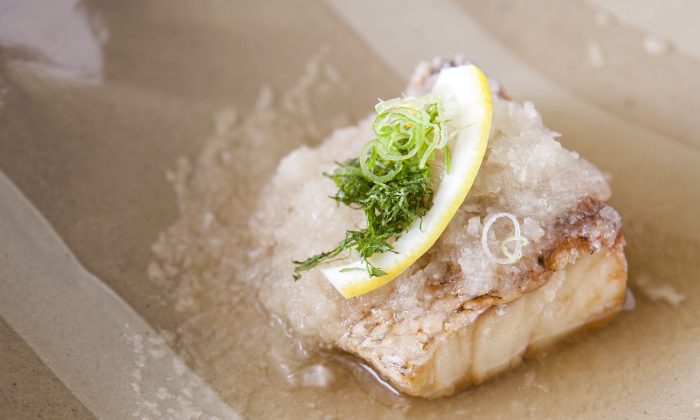 Momokawa: A Fellowship of Sea and Soil

Judging from the number of establishments devoted to serving just ramen or sushi, it’s easy to think that’s all Japanese food is.

Sitting on the sidelines is traditional Japanese cuisine, such as that served at Momokawa on East 28th Street. Here you find nabes (one-pot dishes) offered alongside kinpira (braised burdock roots and carrots in a soy sauce broth) and homemade sesame tofu.

Here, too, flavors ring clear, in turn earthy, mild, delicate, sometimes mingling sea and earth, such the subtly sweet, subtly savory sashimi-grade red snapper, sautéed and topped with grated daikon, sitting in a small pool of sauce made with bonito broth, white soy sauce, and mirin. If this red snapper could talk, it would be grateful for the opportunity to shine so.

Mie Okuda, the chef and owner, behind Momokawa, has an artistic bent, which served in her first career in design and architecture. But when the shift toward computer-aided drafting came about, she decided instead to follow the next thing that fascinated her: cooking. She put her savings in a Tokyo restaurant, which she also named Momokawa.

“People say I was successful,” she said humbly. Politicians dined there, as well as people who she said she’d spot in newspapers and on television.

The graceful Okuda is normally quiet, but when it comes to food, it’s a different story. She can talk and talk. And she can cook on and on. “I don’t get tired. I can be in the kitchen 24 hours continuously, and never mind. It’s fun,” she said.

She also has a long interest in nutrition, and easily lists off the health benefits associated with different ingredients. Feeling tight in your stomach? Pickled plums should help. Eaten too much? Cabbage will help with digestion.

Her interest became acute enough to start a nutrition degree (on top of running a restaurant), and to write two books on the subject. The first, “Thinking of You,” lists recipes for people with diabetes, high blood pressure, or pancreatitis that don’t sacrifice taste (available as an electronic book on Amazon and iTunes).

Her second book, due out this fall, centers around “mysterious Asian ingredients” and their contributions to anti-aging.

Momokawa, for its part, doesn’t focus on healthy cuisine, but there is a sensitivity there, even in dishes that would not be considered the healthiest. There are deep-fried dishes, for example. The fried chicken is coated in a light batter of potato starch, resulting in the thinnest breading I’ve yet tried on fried chicken. (The breading, Okuda said, is where oil is absorbed, so she makes it very thin.) The result is surprising: a moist, savory interior, a light, crunchy exterior—great drinking food.

The beef sukiyaki, which makes use of a beautifully marbled beef from Oregon (an American version of Kobe beef, if you will), is a popular choice, served with golden needle mushrooms, tofu, and also, yam noodles. Okuda doesn’t consider sukiyaki to be particularly healthy, but she does serve it with some Japanese yam noodles—which are translucent, gelatinous, and very low-calorie.

Overall, dishes are not complicated, nor do they make use of many ingredients. That constraint puts a premium on high quality and freshness, and also requires a chef to skillfully balance very few ingredients.

Nowhere perhaps is that better demonstrated than in the kaiseki menu, a multicourse menu ($68 per person) that changes with the seasons.

For example, besides the excellent red snapper I mentioned, it features a chicken and Napa cabbage soup. Thin slivers of dried seaweed and bits of pickled plums sit atop the soup. There is nary even a pinch of salt in the broth, which relies instead on kelp for flavor. Once the plum is mixed in, the soup is delicate, refreshing. The natural sweetness of the Napa cabbage and chicken are set in relief against the acidity of the plums.

“Instead of adding to the process, it’s like reducing the process—to focus on ingredients,” Okuda said of her approach to cooking.

The chicken is organic (Okuda said she cannot use regular chickens for this dish—the chemicals affect the flavor of the dish), and tastes like chicken, mostly unadorned, rarely found on most restaurant menus.

Okuda also plays with textures, sometimes in unexpected ways. Another soup arrived, consisting of tofu skin, wheat noodles, chilled bonito broth, a poached egg, all topped with sea urchin. When it’s all mixed together, textures seem to meld. It’s less about contrast and more about a common fellowship between sea and soil.

The smaller dishes—appetizers, which come together on a tray, delicately appointed like micro-landscapes unto themselves—also provide a diversity of tastes, not one like the other. There is a daikon-tofu chowder, garnished with a lone walnut, which is both creamy and earthy; a small forest of spinach, with the faint hint of smokiness, propping up slices of shiitake mushrooms, with minuscule crunchy rice balls; eggplant that’s been simmered in soy sauce; duck breast marinated in soy sauce, balsamic vinegar, and red wine broth, presented with thin orange slices.

By American standards, portions run small, so don’t come if you’re ravenous—but the emphasis here is on quality far above quantity.

The bar dispenses wines, and of course, sake—hot or cold, by the bottle or the glass—and customers can choose from a variety of small individual sake cups. (I don’t think I encountered two of the same plate either during my couple of visits).

The dining area, too, is small, making reservations a must during peak times. But the vibe is relaxed. Okuda’s own gracious, warm manner imbues it with a welcoming feel. You’ll never be made to feel like you have to slurp your noodles in two minutes flat, and likewise, you’ll never be judged whether you prefer fried chicken or a kaiseki course, or a down-home nabe dish.

*Preheat the toaster oven on a high setting or oven at 450 F.

1. Whisk the ingredients for the marinade in a bowl.
2. Place salmon in a plastic bag with the miso mixture and marinate overnight. When ready to make the recipe wipe the miso from the salmon.
3. Place the salmon slices (skin side up) and cook in a toaster oven for 20 minutes. When they are lightly browned, cover with foil (time depends on the size of salmon).

Red Radish Pickles
Put all the ingredients in a plastic bag and rub lightly.

Advanced Preparation
Boil down the mirin to reduce the alcohol content before using it.
Chicken, lamb chop, beef (marinate for 1–2 days) or firm tofu (marinate overnight).
If you can find yuzu citrus juice, add 1/2 teaspoon to the miso mixture.
The fish or meat can be frozen in a plastic bag with the marinade for 2–3 weeks before using.

Comments
For those on a diet, Coho salmon or sockeye salmon are recommended, as they have 25 to 30 percent less fat than regular salmon, especially the tail part, which has less fat.

Salmon is known to contain a lot of good fish oils and omega-3 fatty acids such as DHA and EPA. Both have preventative properties against arteriosclerosis, brain infarction, cardiac infarction, and high glucose levels.

Mie Okuda’s book titled “Thinking of You” is available on – Amazon and iTunes.