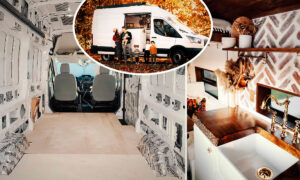 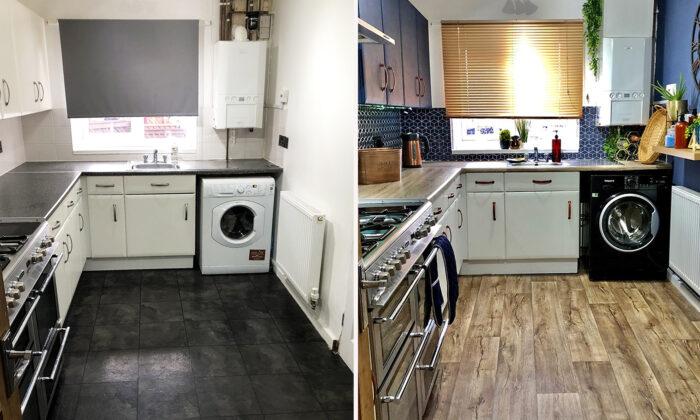 Eloise Mitsides, 30, from Killingworth, Newcastle, England, decided to try her hand at DIY and entirely renovated her dated kitchen for 300 pounds, a fraction of the price of a new kitchen.

“We didn’t have £15k spare for a new kitchen and I was desperate to spruce it up before the baby arrived,” Eloise said. “I decided to give it a go in February while 37 weeks pregnant, I wanted everything to be perfect, so I gave it a shot.”

The creative mom thought she wouldn’t make it any worse than it already was and thus was willing to give it a shot despite not having done something like this before.

Describing her kitchen, Eloise said that it was “plain, dated and had no personality” whatsoever. So although Eloise loved to cook, she didn’t really like her kitchen and wanted to create space that she would feel motivated to cook in.

Eloise and her husband, who are parents to 4-year-old twins, did everything themselves. They chose low-cost materials and were able to revamp the space in six days.

“It only took me about six days just doing a few hours each day. My husband was working full time, I was looking after the twins and 37 weeks pregnant and ready to burst,” Eloise said.

The couple opted for lino flooring instead of wooden flooring. Moreover, instead of ripping out the old tiles and replacing them with new ones, Eloise used stick-on tiles, which cost her 60 pounds (approx. US$85) in total to do the entire length of the kitchen.

“I had seen people online using tile stickers and it looked great. There are hundreds of styles to choose from but I settled on a loud geometric style,” Eloise said. “They have completely transformed the kitchen. They are trendy and funky. I think they really give my kitchen the wow factor.”

Eloise said that if she had of bought tiles, that alone would have cost her much more, not to mention additional labor charges for tiling.

Apart from the tiles, Eloise said she wasn’t very happy with her bench tops, so wanted to cover them, too.

“I have always loved oak style kitchen benches, and I knew that’s the look I wanted to achieve,” Eloise said. “I found an oak style adhesive cover to put over the surface tops. It looks absolutely amazing. I used two rolls which cost me £8 [approx. US$11] each and it was so simple to do.”

Adding the surface adhesive took her only an hour to complete and was a fairly simple process that involved using a bank card and hairdryer to smooth out the lumps. However, this changed her kitchen completely.

To accentuate the look of the kitchen, the couple added some DIY LED strip lighting, which is battery-powered, underneath the cupboards. This cost them 15 pounds (approx. US$21).

The kitchen renovation also consisted of Eloise painting her cupboards and cupboard door handles, making a box around her boiler, painting a feature wall, new plug sockets, and accessorizing with a floating shelf and some plants.

“I didn’t think it would look half as good as it does. I couldn’t believe it. Everything went to plan,” Eloise said, referring to the transformation. “I have absolutely loved the process of the renovation and I definitely think there has been a lesson learned here.”

After the amazing transformation, Eloise has come to believe that there is no need to spend tens of thousands on things like this.

“It is also so much more rewarding when you do it yourself, and knowing I have done it for £300 is even better,” Eloise said. “I love my kitchen now, and I loved the fact that it is original to me. No one else will have it as it’s not from a showroom.”

Eloise’s kitchen transformation was also motivated by her love of cooking, which she shares on social media. She wanted to create a loud and stand-out kitchen for when she takes pictures of her food.

“It would be great that people could recognize me from my signature kitchen,” she said. “I just love how everything turned out. I love the color scheme and the modern feel.”

The transformation has given her the confidence to do things herself in the future and save on costs.