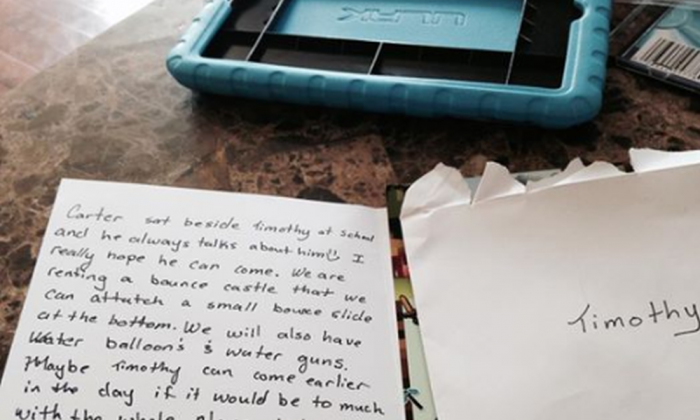 A mother couldn’t help but cry when she saw a birthday invitation her son had brought home from school.

Tricia Klein, a resident of Ontario in Canada, was touched by how considerate her son’s classmate Carter and his mom Ainsley had been.

How many invites have I declined over the years? Have I done my son a disservice?
— Tricia Klein

Klein’s son Timothy was diagnosed with non-verbal autism early on, and gets anxious at social gatherings. So they’ve turned down many invitations over the years.

“I would hate to take the spotlight from the birthday child,” wrote Klein in a blog post. “We parents of the ‘specials’ know only too well the hurts our kids feel when they are left out of the social gatherings relative to childhood.”

Mom moved to tears by birthday party invitation for her son with non-verbal autism: https://t.co/dsgDDB4m1b pic.twitter.com/p7wPARzxBC

But last year, she got the invitation that Timothy had received from Carter at school.

“Carter sat beside Timothy at school and he always talks about him. I really hope he can come. We are renting a bounce castle that we can attach a small bounce slide at the bottom. We will also have water balloons and water guns,” Ainsley wrote.

I want only one thing for our kids–for all kids really, and that is inclusion.
— Tricia Klein

“Maybe Timothy can come earlier in the day if it would too much with the whole class. Let me know so we can make it work.”

“I was shocked that someone would take the time to write the note, and be considerate enough to include him with all of his difficulties,” said Klein.

Timothy finally went to a party, and it went great.

“Timothy recognized Carter right away and ran right into the inflatable minecraft castle. It almost took my breath away how easily he fit in,” wrote Klein. “I had to stop for a minute and reflect on how this could have gone and immediately felt guilty. How many invites have I declined over the years? Have I done my son a disservice? Perhaps. I’m not one to live in the past however, and moving forward I will continue to keep trying to be the best Mother I can to my children in all aspects of their lives.”

The Mysterious Link Between Autism and Extraordinary Abilities

She added to ABC News–as the letter has resurfaced and gone viral–this week that she has become great friends with Ainsley in the past year, and Timothy and Carter remain close.

For everyone else, she has a message.

“I want only one thing for our kids–for all kids really, and that is inclusion,” she said. “All they want is to feel included and accepted for who and what they are–that different is okay…it’s just different,” said Klein.