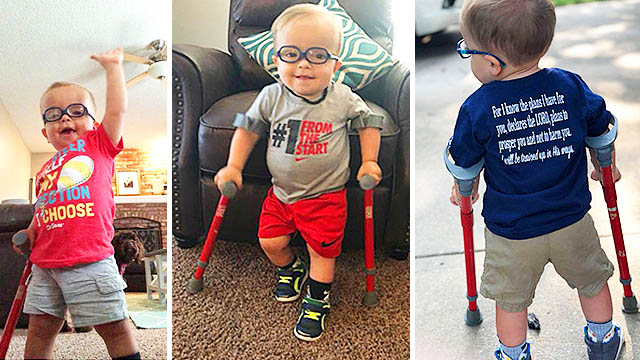 When 2-year-old Roman Dinkel‘s parents went in for mom Whitney’s 20-week ultrasound during her pregnancy, the couple had expected nothing more than an update on their son’s growth and measurements.

Instead, they were given the shocking news that Roman would be born with spina bifida, a birth defect that occurs when a baby’s spine fails to develop or close properly while in utero.

In Roman’s case, extra fluid on his brain and spine were likely to leave him unable to ever walk. But thanks to a surgery performed right after he was born, his parents were hopeful that he would defy the odds—and he inspired millions worldwide when he did just that.

You think he’s proud of himself? “Look Maggie, I walking Maggie!”(for usage and licensing contact licensing@viralhog.com)

His parents shared a video of the moment he was able to walk using special arm crutches his physical therapist brought over for him, delightedly informing the family’s dog of what he was doing.

“Look, Maggie!” he cries, smiling proudly at the dog. “I walking, Maggie!”

Mom Whitney got the idea for the arm crutches late one night, texting Roman’s therapist and giving him the option to try them out the very next day.

In a perfect example of just how powerful representation can be in children’s programming, the toddler immediately fell in love with the crutches, thanks to character Chrissy from the show “Daniel Tiger“—who also walks with arm crutches.

“As soon as he saw them he was in love! He kept saying “I love my new stick!” and he was super eager to give them a try,” Whitney shared, via Facebook. “I think he was extra excited because of Chrissy from Daniel tiger, she also uses sticks to walk and he loves Daniel tiger!”

We are going to go live on Facebook this evening at 7 CST. We’ve had an overwhelming amount of love and support and…

The video Roman’s parents shared was initially just a chance for the family to include others in their excitement over the momentous milestone, but the reaction they’ve gotten from the internet has helped them realize just how inspirational his success has been.