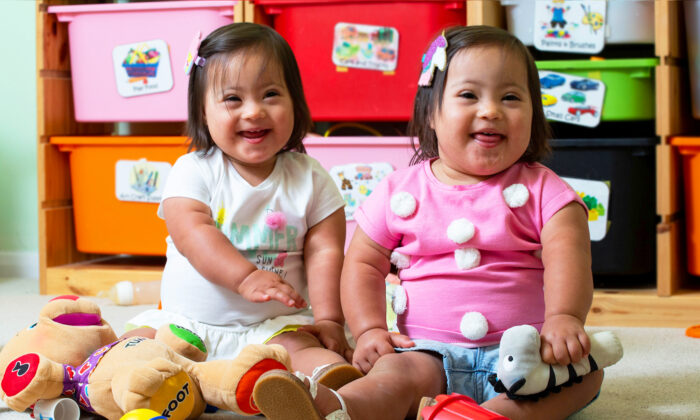 These adorable identical twin toddlers really are one in a million—because they both have Down syndrome.

Proud parents Nardy Mejias, then 38, and Enzo Lattanzio, then 49, from Basingstoke, Hants, only found out that Hannah and Rachel Lattanzio had an extra chromosome three weeks after Nardy gave birth.

They said that their life has been “enriched” by the little girls, who have changed their perspective on the world—although they are living a life they never expected.

The odds of having identical twins where both have Down syndrome is one in a million. But the mother of six said in July 2018 that she wouldn’t change her twin babies for the world and would “recommend them to anyone.”

The couple has also vowed to treat their little ones no different, and the contented twins have already signed up with a modeling agency, Zebedee Management. The cute pair is also learning sign language, and their bilingual parents are talking to them in English, Spanish, and Italian as well.

Full-time mom Nardy said: “They are a blessing to our family.

“So far raising twins has been hard, like harder than running a marathon but caring for our twins brings us great joy.

“We enjoy how they bond together, and celebrate when they reach a milestone at their own pace.

“They are lovely—they are not defined by the condition.

“Our other children are showing them how to do everything.

“It takes time to learn things, but eventually they get to their milestones.”

Nardy also mentioned that over a year after their birth, the little girls “were crawling and standing up and that they are very mobile and active.”

Older siblings Matthew, then 6, Rebecca, then 5, and Sarah, then 3, are lovingly teaching the toddlers and helping them to learn new skills.

Many babies with Down syndrome suffer from health problems in the womb, but Nardy’s pregnancy was entirely normal.

However, the girls were born with “glue ear”—a condition that is common in children with Down syndrome—so they both have hearing aids. Nardy teaches them to communicate using Makaton—which uses images and symbols to teach sign language.

Nardy said: “You can communicate with your hands.

“With typical babies, they learn signs before they can speak.”

Hannah and Rachel have learning difficulties, but Nardy and Enzo plan to send them to a mainstream school.

Nardy added: “For people who don’t know anything about Downs Syndrome, they might be scared getting a diagnosis.

“We had scans every two weeks, and nothing was picked up at the scans.

“Their hearts are perfect, and that’s the most common problem.

“Doctors didn’t have any concerns.

“It was about three weeks after they were born that they were diagnosed.”

Though Nardy gave birth to the twins via emergency C-section, she said: “Nothing was abnormal.” The family were initially shocked by the news as they did not know anything about Down syndrome.

Nardy said: “It was a little bit hard at first but we overcame the situation.

“It took a few months to adjust to the news.

“From that moment, we were learning.”

The couple also plans to have a “normal life for them, with sports, anything that can get them involved.”

Nardy said: “My husband and I have great expectations to reach their full potential according  [to] their future talents and we’re working to give them the right opportunities in life.

“They won’t be defined by Down’s Syndrome but as girls with great capabilities, self worth feeling good about themselves.

“They are learning everyday activities through their senses tasting, touching, seeing, hearing and smelling and they pick it up quickly.

“There are so many things the twins are practicing because of their siblings.”

Nardy again took the opportunity to remind parents who come to know that their child has Down syndrome during their pregnancy to consider that it is possible for them to have a fulfilling life rather than terminate them.

She added: “You never know how your life is going to change and enrich your life, rather than the way you were expecting.

“If I had found out during the pregnancy, I would have been worried.

“But if the baby is healthy, you do not need to worry about it.

“We did not know about Down’s Syndrome in the beginning, and I’d only met one child with the condition before.

“It’s OK to be different, we all have something to bring to the world we just need love, care and the same opportunities afforded to everyone else.”