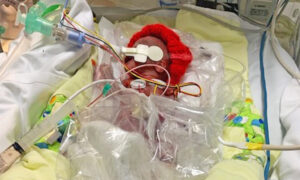 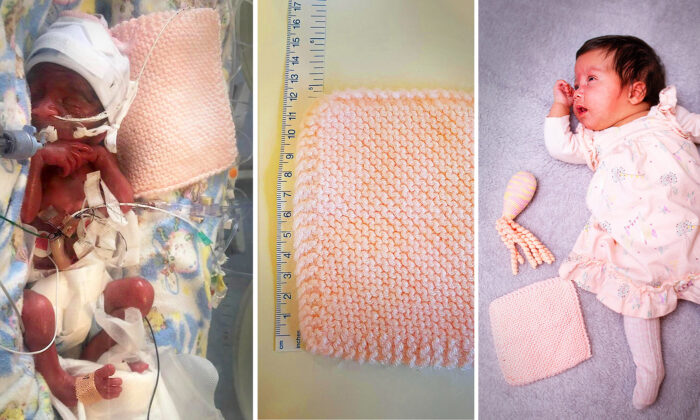 The mom of a premature baby documented her daughter’s miraculous growth, snapping photos of her next to her favorite toy and blankie.

Mary Akram, 22, was told to prepare for the worst when her daughter, Arabella, was born 13 weeks early in September 2020.

The tot weighed 2 pounds, 1 ounce (0.93 kg) at birth and spent the first 90 days of her life in an incubator and on a ventilator at The Royal Oldham Hospital while her lungs grew strong enough for her to breathe independently.

But the feisty newborn defied all odds to survive, and her parents, from Oldham, Greater Manchester, are now celebrating after doctors finally allowed them to bring her home in December.

And Arabella—who was once the size of her dad’s hand—is now huge in comparison to her favorite octopus toy and pink blanket which she was photographed next to in neonatal.

“We can’t believe the progress she’s made,” Mary said.

“We’ve got a journal showing her progress and when we look back we can’t believe she’s come such a long way from how she looked before to looking like a normal, healthy baby.

“She doesn’t look premature at all. It’s like that time never even happened, it feels like a blur.

“When she was in hospital, we had to find clothes for a 2lb baby and now she’s in size 0–3 months. We can’t believe she was ever that tiny.

“The day we brought her home she was in the size just before newborn and we were absolutely buzzing.

“Arabella is now three times the size of the 11cm blanket we bought for her while she fought for her life in neonatal.

“We also have a toy octopus which looks tiny next to her now rather than the other way around.”

Mary, a police officer, suspects she went into labor when she was out for a meal with soon-to-be dad Liam but says she felt no pain. When she went to the hospital for a checkup, midwives quickly realized the baby was in danger due to a membrane rupture.

“I had the healthiest pregnancy possible,” Mary said. “The midwives even said they didn’t need to see me again until I was 32 weeks because she was growing fine.

“When I was 26 weeks pregnant, I went for a meal with Liam and I felt like I’d wet myself so we both laughed and went home.

“I called the midwife just to be safe and she said I should go to hospital just in case but we didn’t really think anything of it.

“Within an hour of being there, I was filled with drugs and told I’d need to be taken to a labor ward. It all happened so fast.

“They couldn’t believe I wasn’t in any pain.”

They explained to her that she could give birth in the next hour, the next five hours, or the next seven days. She needed to stay at the hospital as it was important to keep Arabella in for as long as possible. Mary managed to keep her baby in for seven days.

“We thought she wasn’t going to make it,” Mary said.

“Liam wasn’t eating or sleeping but I had to stay positive because if I was stressed, the baby would be stressed and I think that’s what kept her in for seven days.

“It was weird because I was on a labor ward with women at a completely different stage to me and I didn’t even feel pregnant.”

Mary had a caesarean on Sept. 7, 2020, and Arabella was immediately taken away to an incubator where she stayed for the next three months.

“When she was born, she didn’t look like a human,” the mom said. “She was so small and delicate.

“She was red raw and there were loads of specialists around her putting tubes in her.

“It was scary because it was literally life or death.

“When I first went to see her, I can’t even describe the feeling. I was broken.

“You couldn’t see what she looked like because her face was covered to protect her from the light.

“You could just see her tiny fingers and toes.

“Then when we went home without her it was horrible.

“We came home with no baby, no baby seat in the car and we just had the baby blues.”

Due to lockdown restrictions, the couple were only allowed to see their daughter for four hours a day, and when Mary and Liam were told they had to self-isolate, they were kept away from Arabella for two weeks.

The tot fought off three sepsis infections and put on a whole 8 pounds (3.6 kg) before doctors deemed her fit enough to head home.

“It was the worst three months of my life,” said Mary.

“It was horrible when she was in the hospital because were allowed four hours at a time with her but sometimes when we got there, she’d already been fed and that would mean we couldn’t hold her because she needed to rest.

“We were told we had to isolate for two weeks because we could have been in contact with someone who had COVID and being away from her for that long was horrendous.

“We were scared to hold her, we were told that if we touched her, we couldn’t slide or rub or anything because she was so delicate and it would be painful for her.

“She had some really bad days and she got sepsis three times but she just kept fighting it off.”

Now weighing a healthy 10 pounds (4.5 kg), Arabella is thriving and finally able to fit into her newborn babygros.

Adds Mary, “When she grows into anything it feels like a massive milestone and I feel really emotional.

“We are so pleased that we have the neonatal photos to look back on as she has grown so much since then.

“She’s such a character, she’s starting to smile.”