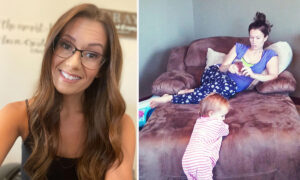 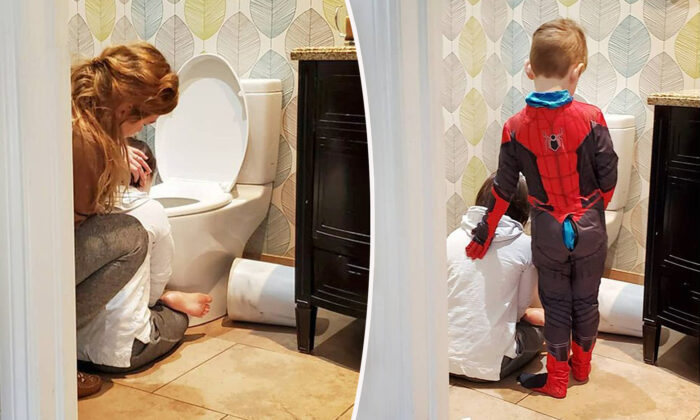 A touching image posted by a mom from Canada contains the powerful message that setting the right example for your children is important and parents’ actions can have the greatest impact on them.

On March 16, Tara posted a thought-provoking image on Instagram, writing: “I could tell my boys over and over to treat others well. I could preach kindness all day long. And I could try to teach them empathy and compassion with words. But, it’s in the day to day that they see what I need them to learn.”

Tara explained in the post that the night before, Pip—her daughter who has Down syndrome and suffers from other health issues—had slipped into her mother’s bed as she seemed a bit off. The next morning, the little girl had vomited all over her mother’s pillow. Additionally, her pump had also stopped giving her insulin and she had extremely high blood sugar, resulting in Pip feeling sick.

As Tara sprang into a “go-mode” to care for her daughter, she wasn’t aware that her older son, Noel, was watching her from a distance, seeing her get vomited on all over by Pip, and then seeing her holding Pip’s hair and squatting on the bathroom floor as the little girl continued to vomit.

Unbeknownst to Tara, Noel had captured an image of her caring for his little sister from his school computer.

Later that day, Noel wrapped his hands around his mother and kissed her forehead, showing her the picture he’d captured, and complimenting her by saying, “’You’re such a good mom.”

A few hours later, Theo, who had also been watching his mother care for Pip all morning, placed himself behind Pip and rubbed her back as she continued to vomit. At this time, Tara had rushed to get Pip some water.

Needless to say, the image of Theo stepping up to care for his older sister in the need of the hour brought tears to Tara’s eyes.

“By acting how I want them to be. By showing them how to care for someone else. By not hiding or sugar coating our situation. I hope they learn all they need,” Tara wrote, signing off from the post.

In an email interview with the Epoch Times, Tara said this is not the first time her son has imitated her. In fact, her two boys constantly imitate her when it comes to their sister, and they are always looking after her and caring for her, as she has some “extraordinary needs.”

“At school, my boys have stepped in to help with communication if she is not being understood,” Tara said. “They have learned sign language. Have given talks to their class to bring awareness to Down syndrome on World Down syndrome Day.”

When Pip had double knee surgery, the boys also stepped in to convince her to keep her knee braces on.

“The bond they share is unlike anything I could have imagined,” Tara said.

When Pip was born and diagnosed with Down syndrome, Tara recalled grieving that her son would miss out on a sibling relationship.

“However, every day they show me it’s so much more. The compassion and empathy she has taught my boys just by being her, is something I could never teach like she has,” Tara said.

The loving mother said that many people have connected to her post, and she hopes that, through it, people not only see the daily struggles that come with Type 1 diabetes, but that parents also take note of how important their actions really are.

“Setting an example is everything. Children learn by actions of what and how parents react, behave and narrate any situation,” Tara said. “Cleaning up puke that day wasn’t meant to be a life lesson. But it was important that my boys saw me care for someone in need.”

Tara is also a founder of a nonprofit organization called “Happy Soul Project,” which she started after Pip’s birth. Her mission is to break down stigmas, change perspectives, and celebrate differences, as stated on her website.

In an interview with Dandelion Woman, Tara said that, through Happy Soul Project, she wants others to be “inspired to feel kinder, wanting to reach out to others more, seeing ways to help those in need, and laughing at how I’m coping in this journey we call parenting.”