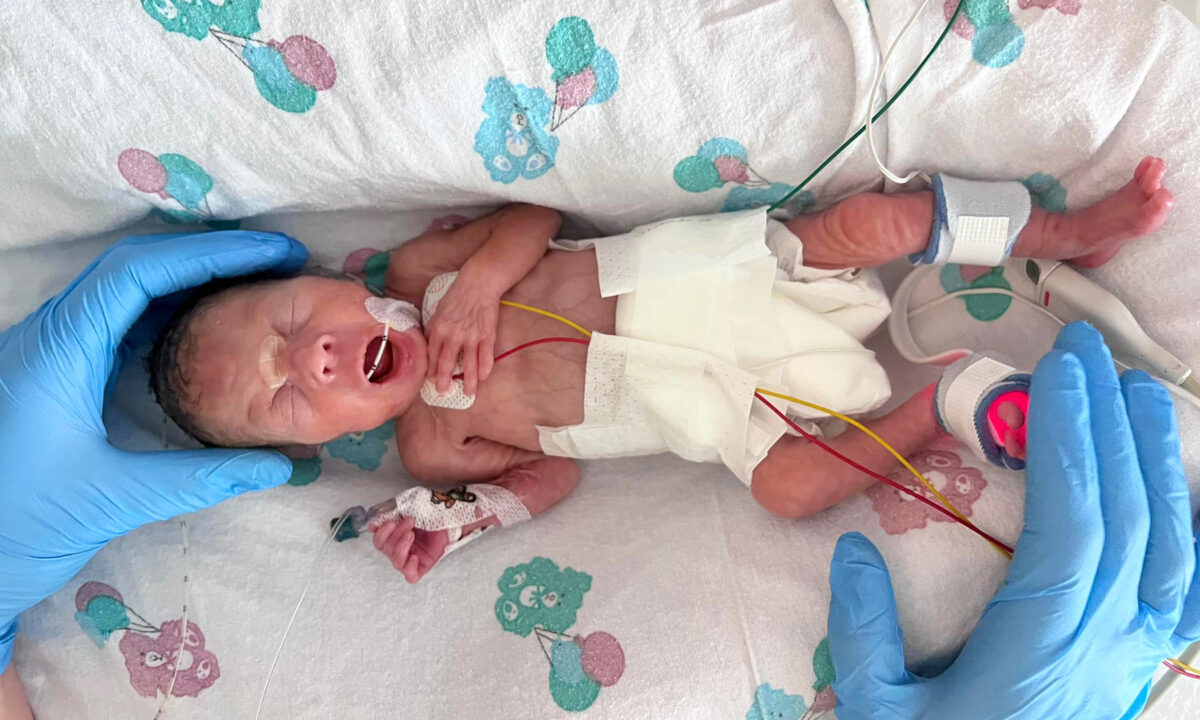 Little Elli Robertson was born 14 weeks premature and weighing in just under 1 pound and 7 ounces, which is scarcely more than the size of your favorite can of sparkling water or soda. After defying medical expectations and a trying 74 days in the NICU, the “absolute miracle” baby is now home in Ayrshire, Scotland, with her parents.

Even with numerous skirmishes under her belt, Elli’s battles are not yet over. And yet, her parents approach each new day with hope rather than fear.

Caitlyn and her husband, Jordan, ages 23 and 29 respectively, are parents to three children: Oliver, Hunter, and now baby Elli.

Caitlyn had experienced premature labor before; her son Hunter was born at 31 weeks’ gestation. During her 20th week of pregnancy with Elli this time, she was even put on preventative medication in order to avert another early labor and delivery.

Defying caution, however, Elli made her way into the world very early. Even with the preventative medication, Caitlyn began her labor 14 weeks before Elli’s June 1 due date.

When Caitlyn’s water broke on Feb. 18, she went to her local hospital, Crosshouse Hospital in Kilmarnock, where she was placed in a laboring suite and started on medication.

“They said that Crosshouse doesn’t deliver babies under 28 weeks unless it’s an emergency,” Caitlyn told The Epoch Times, adding that she was then transferred to Queen Elizabeth University Hospital in Glasgow.

She gave birth to Elli on Feb. 22. Elli weighed 810 grams (approx. 1.78 pounds) when she came into the world. Medical staff at the hospital could not tell what the outcome would be for the baby girl. The possibility that she wouldn’t survive hovered.

“It was very scary,” Caitlyn recalled.

Elli was intubated on the first day of her life, and the pint-sized infant appeared “very fragile and tiny” to her onlooking mother. And yet, Elli’s doggedness would prove formidable.

As a matter of routine, the hospital performs brain scans on micro-preemies—on days 1, 3, 5, and 7—in order to monitor potential bleeds. For the first few days, Elli’s scans were thankfully clear. On day 5, when the Robinsons asked how the scans went that morning, they faced distressing news.

“The nurse said, ‘Oh, the doctors going to speak to you about that.’ Our hearts sank as they had never really spoken to us before, so we then thought it’s got to be something bad.”

There was little that the parents could physically do in order to help their infant. The tactical and professional work was in the doctors’ hands. Still, the parents carried on in prayer.

“All we could do when Elli was born was hope and pray everything was going to be okay,” Caitlin said.

Elli survived with implacable determination. She was a full 74 days in the NICU, tackling challenges the likes of sepsis, a blood transfusion, and difficulty breathing while receiving an onslaught of medications to help her lungs. When none of the medications seemed to help, the hospital staff decided to give Elli steroids, concluding that the “benefits outweighed the risks,” said the mom.

Caitlin said that the results were “remarkable.” Before they knew it, Elli was taken off ventilation, and ultimately, transferred onto high-flow oxygen. After her near three-month stay in the NICU, Elli went home to live with her family.

In early May this year, Caitlyn told The Epoch Times that her baby daughter was “doing fine” after being home for roughly two weeks. While Elli still requires around-the-clock oxygen support and still sees a number of doctors and specialists, the family is taking each day as it comes.

“Elli is an absolute miracle and complete perfection,” Caitlyn said. “We couldn’t have asked for anything better.”

Enthralled by the unexpected reality that all five members of the family are home under one roof, Caitlyn said: “We were [given] so many negative outcomes and possibilities, but we never let them get us down, and we just focused on the here and now.”

And while there are likely battles ahead, Caitlyn is approaching each new sunrise with sanguinity instead of trepidation. She looks ahead cheerfully on behalf of her daughter, knowing that regardless of any challenges Elli faces in the future, she has a full family to support and rally her every step.

“Just have hope, and take each day as it comes,” Caitlyn said.

Their family friends have set up a fundraiser to help them cover some of the expenses on Elli’s long journey to full health.