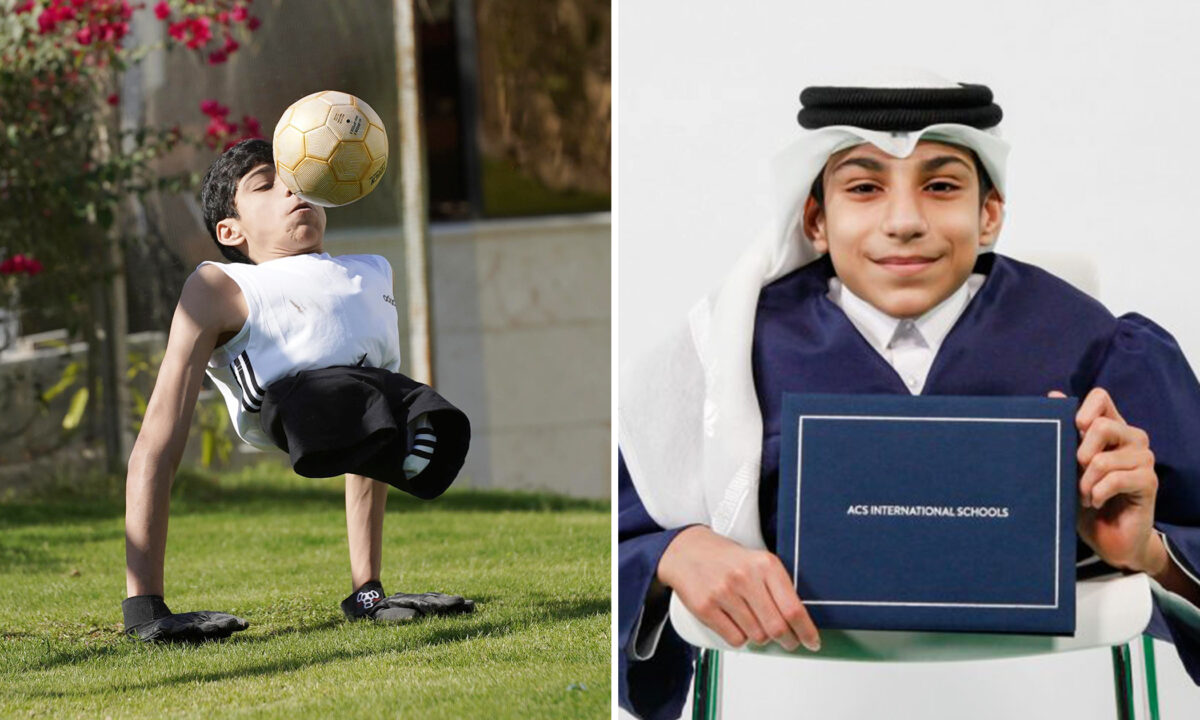 Mom Refuses to Abort Baby Missing Lower Half of His Body, Now He’s a Motivational Speaker

In outright defiance of expectation, a 19-year-old boy from Qatar who was born without the lower half of his body has beaten the odds to become a goodwill ambassador, entrepreneur, motivational speaker, and student who is currently majoring in political science at a UK university. He hopes someday to represent his country as an ambassador.

When pregnant with Ghanim Al-Muftah and his twin brother, Ahmad, his mother received many recommendations to abort Ghanim, as a great number of people believed that the disability caused by his condition—Caudal Regression Syndrome—would only lead to suffering for him and his parents.

Yet, in an intractable step, Ghanim’s parents, Eman Al-Obaidli and Mohammed Al-Muftah, decided to go forward with the pregnancy, and they unswervingly committed themselves to his care, his mother saying “I will be his left leg and you will be his right leg,” she recounted to The Epoch Times.

Ghanim and Ahmad were born on May 5, 2002. Ahmad, who is often seen in photographs in Ghanim’s popular Instagram account, took his first breath one minute earlier than his brother. The boys also have an older sister, Gharissa Al-Muftah.

Together, the family have forged ahead.

Growing up as a child, Ghanim faced great difficulty. At school, he was bullied by his classmates for his condition, which is a rare congenital disorder that occurs when the lower spine doesn’t fully form before birth. This area contains the parts of the spine and bones that form the hips, legs, tailbone, and several important organs in the lower body, according to Healthline.

In response to the teasing, Ghanim’s mother encouraged him to talk to his young classmates and educate them about his condition. The family worked to help others understand Ghanim’s situation by writing multiple books and distributing them for free in their region.

After a rocky start, Ghanim graduated from an international school with honors and is now working on his bachelor’s degree.

The young man has proven to be dauntless.

Due to his circumstances, one might fully expect Ghanim to rely on a wheelchair. However, this insistent soul instead chooses to move about supporting himself on his arms and hands, because he’s of the belief that he should make use of everything with which he is blessed, rather than focus on what he doesn’t have.

Pictures from Ghanim’s social media show him participating in nearly every activity imaginable, all a stunning and sobering reminder to onlookers and skeptics alike that “nothing is impossible.”

Ghanim doesn’t let anything stop him. He does scuba diving, swimming, skateboarding, weightlifting, and rock climbing, removing these from the list of unattainable feats. Not only these, but the young entrepreneur and aspiring ambassador involves himself with speaking engagements to raise awareness and help others with disabilities.

So what motivates Ghanim to conquer each day with confidence?

“The moment that means a lot for me is seeing my dear mom and dad proud of me and my achievements,” he said. “And such moments are exactly like a refuel for me that encourage me to continue and do my best to see that sparkle in their eyes.”

With the pride of his parents charging him with strength, Ghanim has overcome countless challenges. However, one issue that he continually deals with is extensive medical interventions and surgeries. But he sees past this and is confident that he will be free to achieve all his ambitions.

As he looks ahead, Ghanim takes stock of what he has learned so far. He believes that, because of his condition, he has learned to be consistent with everything that he wants to learn or achieve. He has seen the fruit of a devoted and determined family. And, he has learned that in spite of the great challenge, he has an infrangible character.

“They say, ‘what doesn’t kill you makes you stronger,’ and my health condition made me a strong person and revealed all the strength points in my personality,” he said.