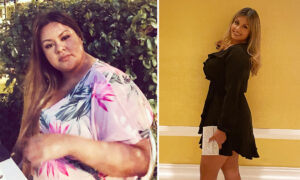 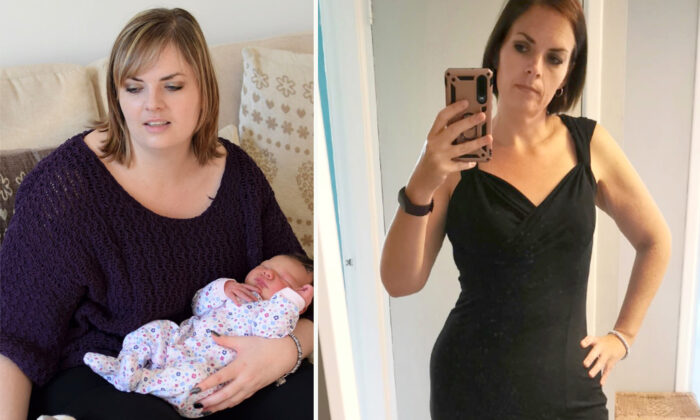 Mom of 2 Sheds an Incredible 70lb During Maternity Leave by Walking 3.8 Million Steps

A mother from England who managed to lose an incredible 70 pounds (32 kg) during her maternity leave by walking 3.8 million steps and changing her diet has rewarded herself with a body-lift surgery.

Michelle Veszpremi, 38, from Rugeley, Staffordshire, was determined to not keep the weight she gained while carrying her second child, Toby, now 2,  and started a strict regime just six weeks after giving birth.

The mom of two had battled weight issues since she was a teen.

“Up until I was around 16, I was pretty average sized for my age but then I met my first serious boyfriend and piled on the pounds when I was in Sixth Form college,” Michelle recalled. “I began comfort eating in a bad relationship and I was 18 stone [252 pounds] before I turned 18.”

Michelle added that she began overeating because she wasn’t happy in her early relationships and her weight soon got out of hand. From then on, she got into a habit of eating large-portion-size meals. In addition, because the people she was with accepted her size, she continued overeating.

During the period in which her weight spiraled out of control, Michelle’s diet consisted of buttered toast for breakfast; a large sandwich, full-fat mayo, crisps, and chocolate for lunch; and she gorged on biscuits, baked cakes and brownies, and donuts for an evening snack. Meanwhile, for dinner, Michelle ate oversized portions of pasta, pizza, or full-fat versions of food.

At that point, in 2007, she did manage to lose 84 pounds (38 kg). Michelle’s parents always wanted her to be healthier and supported her decision to lose weight.

“I had enough of being big and it holding me back,” Michelle said. “My weight fluctuated over a number of years, especially having my two children.”

Thus, after her second child, Michelle set herself a target to get to her lowest weight, refusing to keep her post-pregnancy weight as she had after her first daughter, Molly, now 6.

“After having my first child, I just ate and ate and I didn’t want to slip down that slope again,” Michelle said.

So six weeks after giving birth to Toby, Michelle weighed herself and began her weight loss journey at 234 pounds (106 kg). She had decided enough was enough, and set a target for her lowest ever weight.

Michelle began to track her steps, managing to reach 3.8 million, in a bid to drop her baby weight. Twelve months later, she had shed an incredible 70 pounds and says she was already sporting 161 pounds (73 kg).

“I wanted to transform myself and walk back into work after a year on maternity leave and for people to say WOW!,” Michelle said. “It took me a year to get to my target. I had a year off work and no excuses. I would walk for miles and miles while my baby slept.”

She also shifted to healthier diet options, such as porridge, yogurt, and fruit for breakfast; soup, egg, or toast for lunch; and low-calorie snacks for an evening snack option. Meanwhile, for dinner, Michelle ate smaller portions of pasta, adding more vegetarian options.

“I can eat whatever I fancy but in moderation and gradually lost the weight by calorie counting and exercise,” she said. “I now know exactly what I am putting in my body and what I am eating.”

Last year, Michelle was just 14 pounds (6.3 kg) away from her target weight. Meanwhile, the extreme weight gain and loss had left her with a large amount of loose skin on her stomach.

“I knew I was ready to go under the knife to help me reveal the body I had worked so hard for,” she said.

“I had to get rid of the skin. The operation was canceled last April because of lockdown but I finally had the surgery in October and I cried with happiness when I knew it was all gone,” she said. “It made me so happy and I am really pleased with my scars and the results. They are a million times better than loose skin.”

“I feel like a new woman,” she added. “My ultimate goal is 10st 7lbs [147 pounds], I need to lose another stone to reach my final target weight, but I’m unrecognizable now and I have never been happier.”

Michelle now proudly shows off her size-10 wardrobe and shares her eating and diet tips on her Instagram page. She has been amazed by the support online and said that sharing her story has kept her motivated.