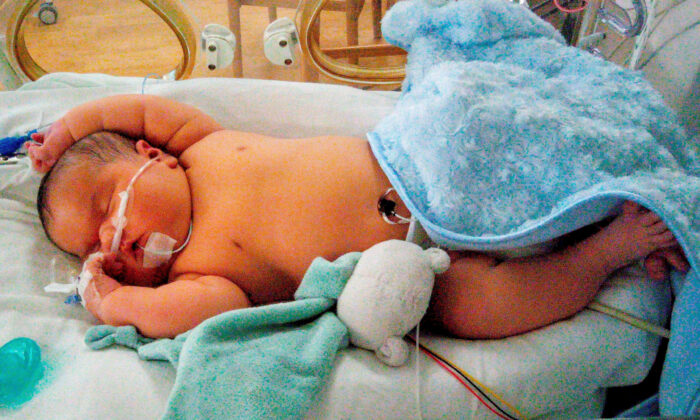 A mother has given birth to a whopping 14-pound 15-ounce (6.77 kg) baby in Oxfordshire, making him the third-biggest newborn ever in the United Kingdom.

Cherral Mitchell, 31, from Thame, Oxon, needed two midwives to haul out baby Alpha before he left staff shocked with his weight.

Alpha’s birth was also a surprise for the parents, Cherral and Tyson, 35, because Cherral got the contraceptive coil before he was conceived.

In addition, the parents weren’t aware that Alpha was going to be so big.

“Everyone kept laughing when his head came out. My husband, Tyson, was like ‘oh my God he’s chunky,'” Cherral said. “There were two nurses pulling—one was trying to push him down to get him out.

“The nurses said it had to be the biggest baby and were on their phones Googling.”

The parents believe that he is a bit of a “pumpkin baby” since he was born so close to Halloween.

Meanwhile, doctors have put Alpha’s weight down to a sweet tooth as they believe Alpha was snacking on Cherral’s sugary fluids while he was in the womb.

“They think that because I was diagnosed quite late with gestational diabetes, Alpha was in amniotic fluid that was sweeter,” Cherral said. “So he was drinking a lot and peeing a lot and getting a high intake of sugar.”

Alpha was estimated to be 11 pounds 1 ounce (5.01 kg) in a scan at 37 weeks, but he ballooned by over 3 pounds before he was born a week later through a C-section at John Radcliffe Hospital in Oxford.

“My stomach was big but not that massive so I don’t know where he was hiding,” the stay-at-home mom said. “I keep saying I gave birth to a baby butter bean. My uncle Jason calls him a baby hippo.”

Cherral is already a mother to Lyon, 3, and daughters Rogue-Angel, 4, and Twyla Bay, 10 months, but said that Alpha is the biggest by a long shot whilst the others were normal.