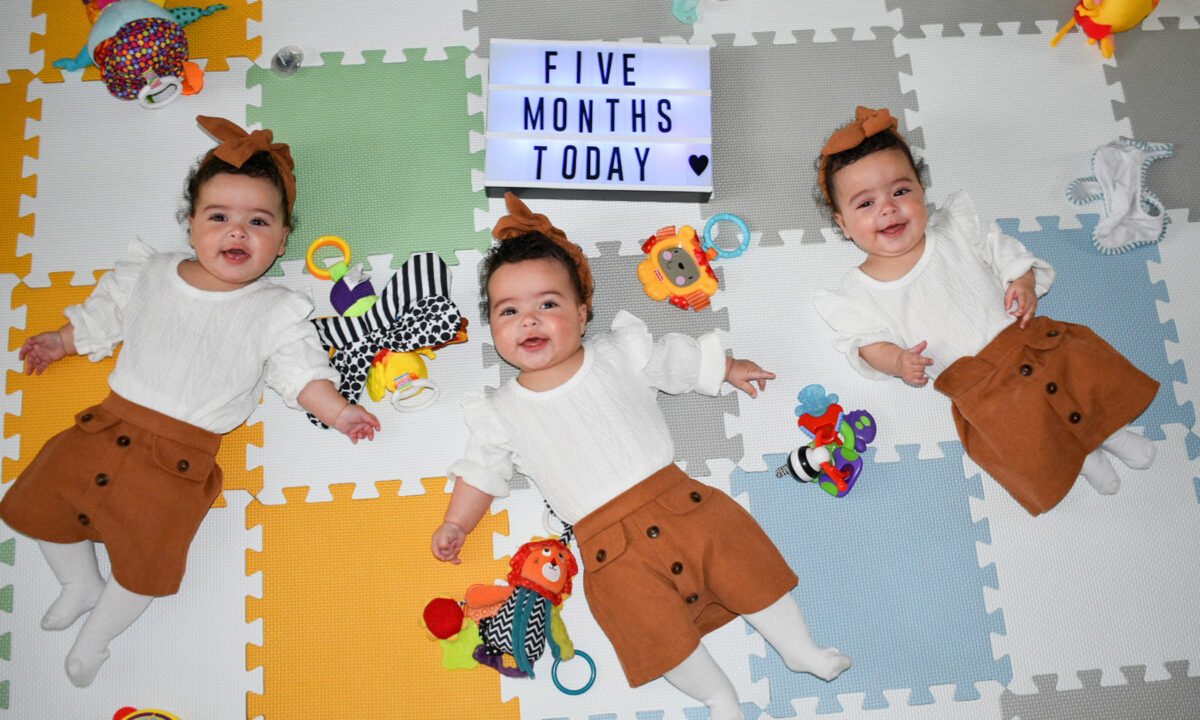 Mom Gives Birth to 1-in-200-Million Identical Triplets: ‘The Best Day of My Life’

A first-time mom has given birth to 1-in-200-million spontaneous identical triplets.

Parents Zahra Amirabadi, 28, and Ashraf Reid, 29, welcomed their baby daughters, Roya, Adina, and Sefia, into the world in December 2021.

The couple, from Nottingham, East Midlands, discovered the triplets at Zahra’s 12-week scan. Both of them have twins in their family, but never expected Zahra to be pregnant with triplets.

“We had been joking on the way to the scan saying ‘imagine if it’s twins,’ but Ashraf said it couldn’t be, and he was right,” Zahra said. “The doctor started the scan, and said ‘I’ve got something to tell you that might come as a surprise.’

“My mind immediately went to the worst place, I was thinking maybe there’s no heartbeat or something like that. But when she told us it was triplets, we couldn’t believe it … it just blew our minds.

“We were both just laughing and crying, and then when she was trying to show us on the scan, I couldn’t see because my belly was moving from laughing.”

Two of the babies, Roya and Adina, were sharing a placenta, with Sefia on her own.

“The doctors all thought at first that we might be having identical twin boys and then a girl,” Zahra said. “They confirmed they were all girls at the 17 scan, so luckily we hadn’t bought many clothes or anything before then.

“When they were born, they looked so similar, so we got a test done and it showed they were all identical.

“The egg split once earlier in the pregnancy, so she got her own placenta, then the second split happened a bit further along, but they are all from the same egg.”

Zahra recalled that she was constantly tired during her pregnancy, napping twice a day throughout. She said she was “so big” that she often struggled to sleep through the night. At her 24-week scan, the doctor told her that she was “carrying the equivalent of a 37-week baby.”

“It was definitely the best day of my life,” Zahra said. “Obviously in the build up to it, I was excited for them to be born, but I didn’t think it would be so amazing.

“I remember I heard the first baby cry and I just started sobbing, then I did the same thing again and again, it was just beautiful. It was music to my ears to hear them all healthy, and they were brought over to me straight away for skin-to-skin contact.”

Roya was born weighing 5 pounds 10 ounces, Adina was 5 pounds 2 ounces, and Sefia was the smallest at 4 pounds 4 ounces.

“I had a planned C-section, and we were told ahead of the birth that one in three triplets are born at 26 weeks or earlier,” said the mom. “The earlier they come, there’s more risk of them not surviving, then the closer you get to 35 weeks, the less time the babies have to be in intensive care.

“Sefia was born quite small, so she needed to be taken to the neonatal unit for bottle feeding, as she had low blood sugar. After that, I was just feeding her a bit more regularly, but it made me quite emotional because it was the first time the three of them were apart.”

All three babies are now thriving at home. Appreciating the support of her family and siblings, Zahra said they all worked out a perfect routine between them to ensure she wasn’t on her own too much.

“I’m one of seven sisters and I have a brother, so they were all coming round when Ashraf went back to work,” she said. “Since [the triplets] have started sleeping for longer stretches at night, things have got much easier, but it’s still manic.”