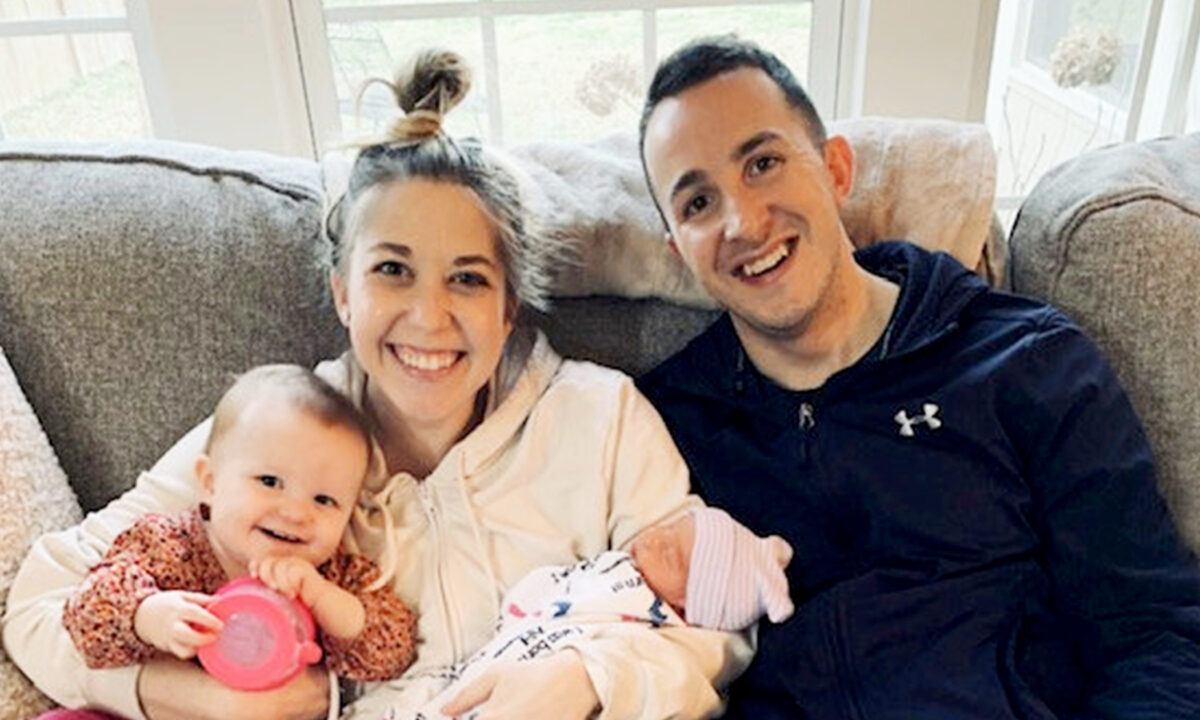 Mom, 30, Gives Birth to 2 Babies in One Year From 2 Separate Uteruses

A mother has given birth to two babies in a year as they each grew in two different uteruses.

Caroline Wortman, 30, discovered that she was nearly 10 weeks pregnant with her second child, Brooks, almost six months after the birth of her first daughter, 1-year-old Josie.

“Having children was always something I knew I wanted, but I just tried to stay positive and not dwell too much on it,” Caroline, from Woodstock, Georgia, said. “Infertile was the story that I told myself for 10 years.”

The news that she might be infertile came in after she was diagnosed with uterine didelphys—a condition in which a woman has a double set of reproductive tract organs.

Uterine didelphys is caused when, while a female fetus is growing, its uterus starts out as two small tubes called Müllerian ducts.

These will eventually fuse together to form the reproductive system in a process called embryogenesis.

Women with uterine didelphys do not undergo full embryogenesis and can be born with two full reproductive systems.

Caroline was 18 when she had her first appointment with the gynecologist who, after completing the exam, told her that she had two cervixes.

She recalls just shrugging off the news, as she was unaware of what the implications might be.

“I did ask the doctor what having two cervixes meant and remember her telling me that I may be infertile and if I did become pregnant, it would likely be complicated and high risk,” Caroline said. “I think this took years and meeting my husband to really sink in, but it was always in the back of my mind.”

A couple of months later, she went for an internal ultrasound, where it was confirmed that she had two complete uteruses, and was diagnosed with uterine didelphys.

At this time, she was again told that it would be difficult for her to get pregnant in the future.

“I always knew I wanted to be a mum, I just wasn’t sure that I would be able to without adoption, surrogacy, or some other intervention,” said Caroline, who works for a law firm.

Growing up, Caroline’s diagnosis didn’t affect her life, but things changed when she met her now-husband, Nate Daniel Wortman, 35, when she was 23.

The two were introduced by a mutual friend while Nate was serving in the Army and was stationed near Caroline in Savannah, Georgia.

Slowly, Caroline opened up to Nate about her condition.

“I was nervous. I knew when we started dating that he wanted children and I didn’t know if it was something I could give him,” the visual communications graduate said. “But he was very reassuring and didn’t really seem to be bothered by the fact that we may need to seek other options for having children.”

He always told her that it would somehow work out if it was supposed to.

When the couple got married in 2019, they immediately began trying for a family.

“I didn’t know how long it may take, if at all,” Caroline said. “I was worried, but you always hear worrying makes getting pregnant harder, so we just tried to be happy and relaxed as newlyweds about the whole thing.”

On April 25, 2020, Caroline went out for a job but had to stop as she started to feel strange and out of breath.

It then hit her that her period was a few days late, and she took a pregnancy test that she had bought months prior.

“While I was waiting for the test results, I put the stick in a drawer so I couldn’t stare at it while I was waiting,” Caroline said. “I felt like I was about to pass out from nerves, I hadn’t even told Nate that I was going to take the test.”

The happy couple went to the doctor and found out that Caroline was seven weeks along. They continued to have monthly appointments and internal ultrasounds to check she was progressing smoothly.

The uterus that was not carrying her baby simply pushed aside as it grew, and little Josie Magnolia Wortman was born on Jan. 2, 2021, at a healthy 6 pounds (approx. 2.7 kg).

The family of three spent a happy six months as just that before Caroline started feeling nauseous while out at lunch with her parents in June of the same year.

“I thought it was my dad’s driving, but that second, all the weird symptoms clicked in my head and I took the test that next morning before work,” Caroline said. “When I came downstairs from taking the test, Nate asked ‘are we in the clear?’ and I held up the test and smiled and said ‘nope!’

“We were giggly with excitement, but also still terrified.”

The couple had not been trying for a second baby, but at her next appointment, Caroline discovered she was already almost 10 weeks along—and the baby was growing in her other uterus.

“The baby was small enough each time to see the other uterus and confirm which side the baby was in—Josie was on the right, Brooks was on the left,” Caroline said.

While her pregnancy was normal, she went into labor at 33 weeks and five days and was completely dilated by the time she reached the hospital.

Caroline believes his prematurity was likely due to her cervix dilating early, which is a common complication with uterine didelphys.

She shared her unique pregnancy story on TikTok, which now has over 930,000 views and nearly 39,000 likes, in order to raise awareness of fertility struggles.

“Being infertile and thinking you will be infertile are two drastically different things, but I would just encourage women to not give up if they want to become mothers, and to not take a doctor’s words as the be-all and end-all,” she said. “I don’t remember really coming across any relatable stories with my specific diagnosis during my pregnancy, so I hope this can be that to at least one woman.”

She also hopes that her story can help other women who are diagnosed with the same condition as her to look and say “look, this girl was told no and she had two healthy babies in one year.”