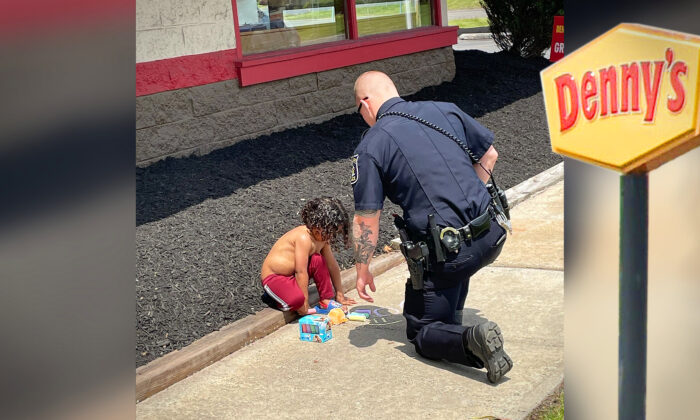 Police officers in DeWitt, New York, responded to a heart-rending scene when they got a call about a homeless mother and her four children living in a Denny’s parking lot.

After the restaurant manager called 911, officer Tyler Smith arrived at the scene and found the distraught family who had no money, no phone, no car, and no shelter.

Customers and staff were graciously offering them food, money, toys, and other supplies, according to the DeWitt Police Benevolent Association.

Soon, a second officer, Justin Baum, arrived; but they were unable to speak with the woman due to the language barrier—until a good Samaritan arrived and assisted the officers by translating.

During the exchange, a touching moment was captured on camera as officer Smith knelt down to comfort a 2-year-old boy who was drawing with colored chalk on the sidewalk outside the restaurant.

The picture was later posted on the Benevolent Association’s Facebook page, and it garnered hundreds of reactions and shares from the online community.

“What you don’t see are the other police officers just out of frame on the scene with three more children and her mother,” the group captioned. “They are assisting them with finding housing, diapers, and food since they are homeless, out of money, and now living in an open air parking lot with nowhere else to go.”

Determined to help the mom get back on her feet, the association put her up in a hotel for a week; meanwhile, local officers dropped off more supplies, and followed up with Social Services to work on getting her a permanent place to live, the post added.

Thanks to the DeWitt community, the woman is no longer without shelter, and as of June 9, she is searching for full-time work in the area, CBS reported.

“We wish to thank all the Officers and community members that went above and beyond to help out a family in their time of need!” the Benevolent Association added.