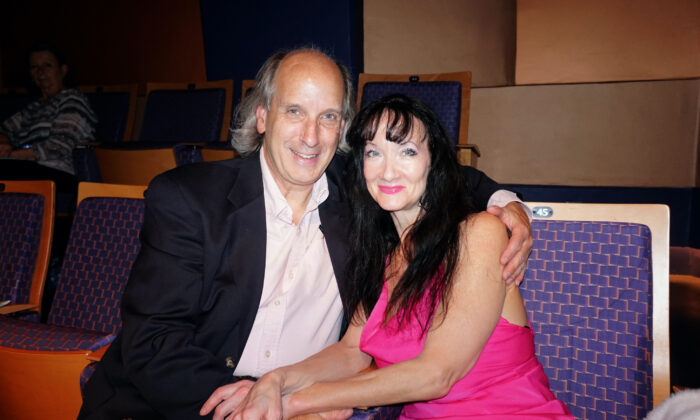 MESA, Arizona—For David Sambuceti and Caroline Wagner, Shen Yun Performing Arts did not only deliver an evening of beauty, legend, and majesty, it introduced them to a new spiritual pursuit that they’ll have with them for as long as they’d like. Wagner, being a self-proclaimed sensitive soul, took immense pleasure in learning about the meditation practice known as Falun Dafa from New York-based Shen Yun.

“[Shen Yun] is just amazing because I really can feel it spiritually,” said Wagner, “because I’m one of those sensitive soul types. So you can really feel it in your soul.”

Wagner inquired enthusiastically about Falun Dafa, the ancient spiritual discipline that motivates some of the characters on stage in Shen Yun, alongside faiths common throughout Chinese history such as Buddhism and Daoism. Falun Dafa teaches truthfulness, compassion, and tolerance and includes five energy-strengthening exercises.

“Where can I learn it? I want to learn it,” Wagner exclaimed after learning that it’s a spiritual practice freely available for anyone in the world to adopt. “Oh, I would love that!”

“I can feel [the performance] in my soul. It’s incredible. It’s really beautiful. I’ve never seen such beautiful dance and the costumes are amazing. It’s just the colors, everything is perfect. I don’t think I could improve on it. No way. I couldn’t even think of anything half as this beautiful. Really. It’s just incredible. I’m so grateful [they]’re doing it,” said Wagner, who teaches yoga.

Shen Yun artists themselves practice Falun Dafa in their daily lives and say that it steadies their minds and strengthens their bodies in preparation for their world-renowned performances. In fact, their very motivation for starting the performing arts company and for reviving China’s 5,000 years of civilization lies in the time-honored Chinese tradition of revering the divine and refining ones’ self in order to move closer to it.

Wagner’s companion, Sambuceti agreed with her that the spiritual, as well as artistic elements of Shen Yun were amazing.

“It’s just so beautiful visually. Again, I love the colors they’re so vivid and beautifully designed. And the dancers are just exquisite. The women are so elegant, the men are so athletic. I just marvel at it! And the music is wonderful to accompany it. So I am enjoying everything about it,” said Sambuceti, who works in information technology.

One of the dances by the female cast especially stood out to the couple. “They look like flowers in the costume where the pink … with the long pink [sleeves]. That was my favorite so far. It was incredible. It looked like nature,” Wagner said.

“That was my favorite, too,” added Sambuceti.

“Gorgeous,” his date chimed in.

“I love the stories, too,” Wagner added. “Yes, because they teach you something, too. About being strong and standing up for what really matters which is your spirit more than what society … said of that persecution.”

Sambuceti remembered how this theme of perseverance amidst persecution appeared in more than one of Shen Yun’s roughly 20 short vignettes. “The baritone with the piano accompaniment was telling that story,” he said.

Falun Dafa is severely persecuted in China today as part of a decades-long campaign by the Chinese Communist Party to try to eradicate traditional Chinese culture. This is why Shen Yun cannot perform in China today.

The yoga instructor was struck by the fact that Shen Yun is filling a need to restore traditional Chinese culture, including beliefs and disciplines like Falun Dafa, because the culture was almost lost.

“That’s a shame. It’s so wonderful. I’m glad it is being preserved in a way and shared here. I’ve never seen anything like it,” she said. “I love this show. It really touches me.”