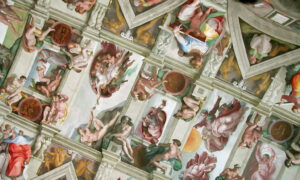 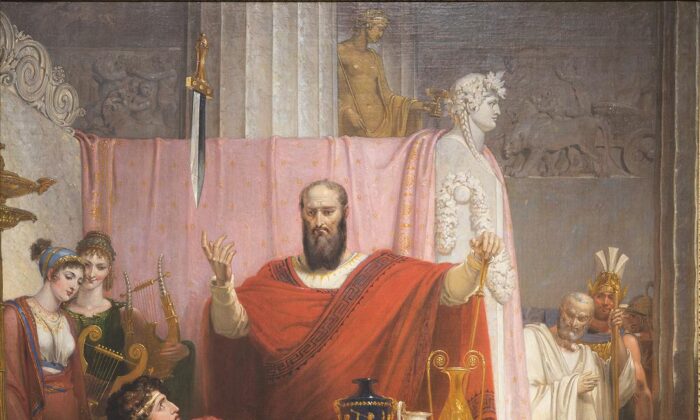 The Grass Is Not Always Greener: ‘The Sword of Damocles’

The “Sword of Damocles” is a moral tale that comes from the Roman scholar Cicero. Damocles was a servant to a fourth- and fifth-century king named Dionysius II.

Dionysius II was a miserable king who ruled his empire with a cold heart, making many enemies in the process. He was always afraid of being assassinated, and because of this, he surrounded his abode with a moat. He even went as far as to let only his daughters trim his beard.

Once, a court servant and flatterer named Damocles annoyed the king with his compliments. Damocles told the king that he must have one of the most amazing and pleasurable lives. Frustrated with Damocles’s naivete, Dionysius II responded: “Since this life delights you, do you wish to taste it yourself and make a trial of my good fortune?”

Of course, Damocles was astonished at the king’s response and immediately accepted his proposal. At first, Dionysius II sat Damocles on a golden couch and had servants wait on him like he was king. Damocles was treated to the best food, drink, and pleasures of a king’s life.

As soon as Damocles was beginning to enjoy his new life of luxury, though, he saw that he was threatened by a sword hanging from the ceiling. Above Damocles’s head, Dionysius II had suspended by a single strand of horse’s hair an extremely sharp sword.

Keeping a watchful eye on the sword, Damocles could no longer enjoy the luxuries around him. It wasn’t long before he asked if the king would excuse him from his newfound fortune.

Richard Westall’s ‘The Sword of Damocles’

Richard Westall, the 18th- and 19th-century English painter and drawing master for Queen Victoria, painted a great scene depicting the climactic moment in the story.

The focal point of the painting is King Dionysius II, who, dressed in a red robe, stands in the middle of the composition. One of his hands rests on what appears to be a scepter, and the other hand gestures toward the hanging sword at the upper left of the composition.

The sword leads our eyes to Damocles, whom Dionysius II watches. Damocles is dressed in ornate clothing like a king, sits on a golden throne, and reaches for a glass of wine presented to him by a maidservant. He has just noticed the sword hanging above his head as he reaches for the glass.

In the foreground is a wreath of flowers and a scepter. It looks as if Damocles once donned the wreath and held the scepter, both of which likely fell as he looked up at the sword.

Damocles is surrounded by luxury. There are beautiful dishes, golden furniture, and ornate artworks around him. There’s fruit on the table beside him, and other maidservants wait to bring him a dish. Women in the background on the left side of the composition hold musical instruments, and we can assume that they were playing for Damocles. In the background to the right, an older man and a soldier are watching the scene unfold.

The Grass Is Not Always Greener

Westall depicts Damocles at the moment he realizes that the grass is not always greener on the other side of the fence. Damocles had believed that the king’s life was more pleasurable than his own. It was only upon experiencing the difficulties of the king’s life that he came to appreciate his own, which came with its own comforts.

I think Dionysius II gestures toward the sword not only to prove his point that being a king is not as pleasurable as Damocles thinks, but also to be understood. Though a coldhearted king, Dionysius II provides Damocles with a lesson in compassion: Even a king like Dionysius II wants someone to understand him and consider his difficulties.

As human beings, everyone suffers, and no one is above receiving compassion; the rich, the powerful, the famous, and the royal all wish to be understood.

With that said, the painting offers another nugget of wisdom: All of the things that we think we need to make our lives more pleasurable are ephemeral.

Damocles realizes that his recently acquired pleasures are worthless when his potential death is on the horizon. He can’t even look at the wine for which his hand reaches, and he doesn’t realize that his flower wreath has fallen off his head or that the music has stopped. All of the pleasures around him are unimportant compared to that hanging sword.

We can’t take any of our material possessions, pleasures, fame, or power with us when we die. Maybe it’s wise to take these things a little more lightly in our day-to-day lives. It took Damocles’s confronting his potential death for him to appreciate his life and to no longer think that the grass is greener elsewhere. Hopefully, we don’t need such extreme measures to have deep gratitude for our own lives.