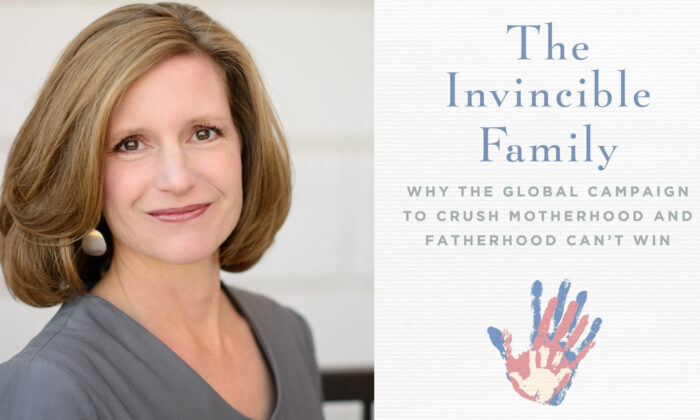 Kimberly Ells is a policy adviser at Family Watch International. Her new book is "The Invincible Family: Why the Global Campaign to Crush Motherhood and Fatherhood Can’t Win." (Courtesy of Kimberly Ells)
People

Kimberly Ells on Why Real Power Lies Within Families

Families are the fundamental units of society, and families—mothers in particular, who are connected physically with new life and handed babies the moment they are born—are really what govern the private sphere. Yet this isn’t a story Kimberly Ells has heard fully told elsewhere, as she explains in her new book “The Invincible Family.”

Today, the fight for political power encompasses every issue, so it’s not surprising that those set on accumulating power have turned their attention toward taking it from the private realm, Ells says. What did surprise Ells was when she learned about the movement for “children’s sexual rights” and its influential base of global supporters.

In 2013, Ells came across a pamphlet online called “Exclaim! Young People’s Guide to ‘Sexual Rights,'” published by the International Planned Parenthood Foundation (IPPF) and distributed at the United Nations, from which IPPF receives funding.

“It’s [written] for young people; it presents to children sex and sexual pleasure as if it is their right to pursue that, unconnected to marriage, unconnected to childbearing, or long-term responsibility on some level,” said Ells, who is a policy adviser for Family Watch International. She was troubled by the fact that there was a mainstream movement to promote the “sexual rights” for children and that the U.N. had been developing material to promote this idea for several years already.

“They drape sex for kids in very appealing terms, in the language of rights,” she said.

In plain language, this rights movement says children, of any age, should have sex. It’s not something most people would support, but it’s a core principle that already has made its way into culture and classrooms, where children are told they have rights to life, privacy, health, and so on. But a closer reading reveals the purpose of teaching these rights is to ensure that activists have the right to teach children how to have sex, have an abortion, and obtain contraception—cutting parents out of the process.

In her recent book, Ells details how those vying for power and advocating for socialism have made powerful allies in the U.N. The documents and official goals then developed in U.N. branches trickle through a maze of organizations until they reach your child’s school or become part of the mainstream culture. If you’ve ever wondered why nonprofits, unions, and advocacy groups suddenly start to push in unison for a certain education trend (such as gender equity in education, social and emotional learning, and so on), you can look to the U.N., which probably had something to do with it.

The U.N. isn’t a regulatory agency with enforcement power, but it is a forum with wide reach, perfect for organizing ideas like the Sustainable Development Goals and the Incheon Declaration, and it provides relief funding to developing countries around the world. Its affiliate organizations, like the Global Partnership for Education, do some of this on-the-ground work, pouring millions into education in dozens of countries, from Albania to Zimbabwe, and dictating curricula that easily include ideological sex education.

But even in places where the U.N. isn’t footing the education bill, such as the United States, there is voluntary buy-in to ideas that were originally hashed out in U.N. documents by committees and authors, including those from nonprofits, unions, and other organizations that espouse the same ideas.

“There’s all these major players with big money and big influence that are bearing down on the family, particularly from the United Nations—so that can be a little bit daunting,” Ells said.

“There is this great power of guiding and molding children’s minds and beliefs from the very earliest ages that lie in the family.

Ells says those who seek to “unseat” the family from its place of power come from many different directions, and there are many (sometimes even contradictory) tactics.

Early in the book, she quotes Friedrich Engels, coauthor of “The Communist Manifesto,” who wrote that marriage was invented by egoistic men who wanted to leave their private property to their offspring; and from Shulamith Firestone and her intellectual successor Sophie Lewis, women of a particular brand of feminism, who insisted the woman’s own body is the source of all problems. At first, these works may sound like absurdist theater.

Ells says that though most people wouldn’t agree with their radical ideas—to remake society so that no one could tell to whom any child belonged, childrearing would all be left to professionals, or incest wouldn’t be taboo—these ideas have taken root in documents hashed out at the U.N. and are making their way around the world in policy and culture.

She poses a few questions: Who is suggesting or legislating that mothers or fathers are unnecessary to families? Who is working to make the care of young children a government-run endeavor? What efforts are setting the stage for the state to become the gatekeeper for who is allowed to have children?

Countless studies show that children who grow up with married biological parents have higher levels of well-being than children in any other type of family. Adoption exists to protect children whose biological parents cannot care for them, not so adults can buy parenthood. Ells adds that families create an innate sense of belonging, a unique social bond we compare every other kind to (such as when we talk about loving someone “like family”). Mothers and babies show this even in a physical sense, being literally tied to each other by an umbilical cord, and fathers do so through marriage.

Yet today, children are being commodified and surrogacy is on the rise. U.N. organizations boast of being able to shape children’s attitudes through education, and influence societies toward handing over the education of children to the state from earlier and earlier ages. The organization actually has a “Population Award” (which has been given to a China one-child policy architect as well the Guttmacher Institute, once Planned Parenthood’s research arm). There are efforts to erase the differences between men and women both physically and in language.

“A lot of people don’t see that those influences are coming from the United Nations, they don’t see the connections that are woven together,” Ells said.

For instance, women from around the world come to the U.N. in New York every spring to finalize the Commission on the Status of Women’s outcome document. In 2017, the document contained language promoting “quality care” and recognizing “unpaid work,” but in policy terms it meant regulating the private and domestic sphere, wherein “women’s work” would be “redistributed.” The intentionally vague language makes such goal documents easy to support; only someone familiar with how they are written would worry about who might be doing the redistribution and whether these women would continue to have any say over their domestic work.

Throughout her book, Ells shows how these vague and benign-sounding policies eventually lead to damaging outcomes.

“They convince all these really well-meaning women who come here to really embrace these ideas, and then go home and advocate for them in their countries,” she said. These women push these goals through word of mouth, nonprofit organizations, the media, and so on.

“Feminism has been really effective in telling women that power lies elsewhere, [that] it lies not in being a mom, but really anywhere else.”

‘Battle for the Babies’

Ells also quotes a long list of wise men and dictators alike who all said that influencing the young, impressionable child is the key to changing a society.

And if the mother is the one who shapes the mind and heart of a new person from his or her earliest years, and these people then go on to fill our schools and legislatures and boardrooms and society at large, her influence is immeasurable.

“It’s almost impossible to crush the family entirely, because it’s self-regenerating. Governments are not,” Ells said.

“Regimes, dynasties, political factions—they come and go, and they have to have funding and supporters and all these things, and they don’t regenerate themselves inherently. But the family does. That’s how life itself is created. It’s the thing that always comes back, it’s the constant. It’s the thing that persists when other things fall away or fail. The family is regenerative, and it will always rise again.”

Her book includes a story of a pregnant woman living under communist China’s one-child policy who escaped authorities through a pigpen and hid in a rice paddy for days because she was “ready to fight them to the death for the life of my son.” There are also the Hungarian families who brought their children into the cellar every night in secret to teach them the truth, undoing the lies and communist propaganda taught all day in school. Ells believes the usurpers will ultimately fail, because mothers and fathers care about their children.

The state cannot successfully impose values on a society that families refuse to agree with.

“It’s difficult to accomplish that if there are families in the world, these little tiny cells, these pockets in the world that are teaching their kids what they want and what they believe is right,” Ells said.

The primary way the U.N. agenda reaches children is through Comprehensive Sexuality Education, an innocuous name that is slowly becoming recognized around the world. It mixes regular sexual education with plenty of gender ideology and the concept of “children’s sexual rights,” which includes having children understand that parents, culture, or beliefs that say otherwise are “infringing” on their human right to sexual pleasure.

“In my state, which is a very conservative state traditionally, there have been repeated attempts to mandate Comprehensive Sexuality Education in our schools through our legislature,” said Ells, who lives in Utah. More left-leaning states like California have already fully embraced it, she added, but in her state, people have fought back and blocked it. Despite that, similar ideas do make it into the curriculum.

“It’s creeping in almost everywhere,” said Ells, who is a mother of five. She has two daughters now in college, two daughters in high school, and a young son. Years ago, one of her daughters mentioned that her health teacher had taught that Planned Parenthood was a viable alternative to students’ parents for information about sex education.

“We openly and regularly talk about these issues—family, marriage, sex, gender. And we make it a point to talk about them,” she said.

“If your kids are taught early about what is right, they are likely to continue to embrace it. If the parent is the one that opens the conversation about sex, then more often the child sees the parent as the safe place to come to talk about sex. But if the parent never broaches the topic, then it’s awkward for the child to bring it up. So we parents have to be proactive and persistent, and persistent in making that a comfortable topic for our children.