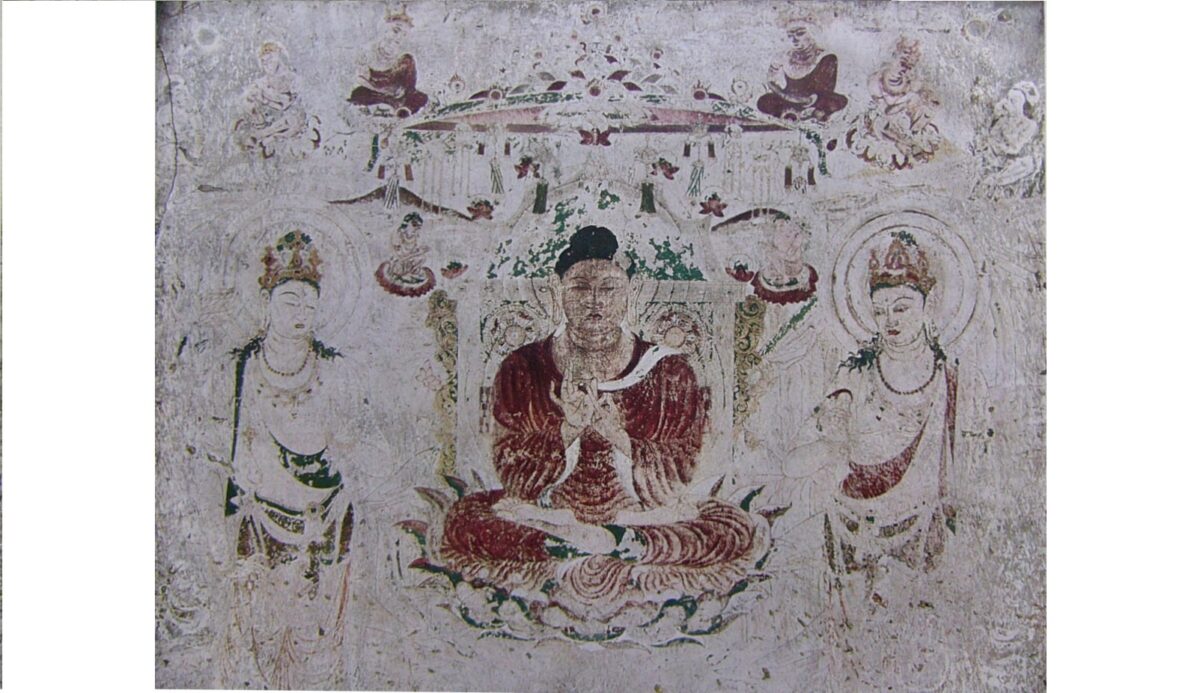 The Golden Hall (Kondo) of Horyuji Temple was once adorned with Buddhist murals similar in style to those of the Ajanta caves in India and Dunhuang caves in China. In 1949, a fire damaged a substantial number of the Horyuji murals. In this photograph, taken before the fire, a seventh-century mural shows Buddha Amitabha’s paradise. (Public Domain)
Arts & Tradition

Larger Than Life: Art that inspires us through the ages
BY Epoch Times Staff TIMEMarch 21, 2021 PRINT

From 594 to 622, Prince Shotoku ruled Japan. He certainly lived up to his name, for “sho” means sacred and “toku” means virtue.

During his reign, he promoted Buddhism in Japan, so much so that he is popularly known as the founder of Japanese Buddhism. After his death, many even called him “Japan’s Shakyamuni.” A historical figure of India, Siddhartha Gautama became known as Shakyamuni after his enlightenment, and his teachings became the foundation for Buddhism.

The second Buddhist temple Shokotu commissioned was Horyuji, in Nara Prefecture, southern Japan. The temple is a significant part of Japan’s art, architecture, and spiritual heritage.

Buddhism had only just emerged in Japan from China, via the Korean peninsula, when the wooden buildings of Horyuji Temple were built. Japan’s first Buddhist temple, Shitennoji, still exists, but its buildings were later rebuilt, therefore, the temple buildings of Horyuji, are Japan’s oldest surviving Buddhist structures. Several of the Horyuji Temple buildings date from the late seventh or early eighth century, making them among the world’s oldest surviving wooden buildings.

According to the UNESCO website, the buildings were constructed using the Chinese bay system, a type of post-and-lintel construction, with ornate brackets and large columns bearing the immense weight of the tile roof.

UNESCO lists some of the temple’s architectural highlights; for example, the columns’ cloud-shaped brackets and the application of entasis to the columns. Entasis is a technique whereby the columns have been gently tapered for aesthetic, and often weight bearing, purposes.