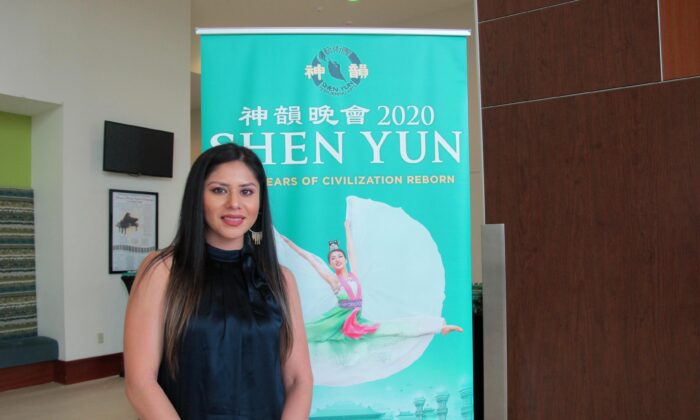 VENICE, Fla.—Shen Yun Performing Arts sparks artistic inspiration everywhere it goes. In the last 13 years of Shen Yun’s existence, many artists and designers across disciplines praised its creative innovations. And today in Venice, Florida, its influence continued to grow.

Beatriz Figueroa, an interior designer, discovered a new source of beauty and visual interest after seeing New York-based Shen Yun’s performance. And watching traditional Chinese culture come to life on stage was far superior to reading about it or merely seeing pictures of it, Figueroa said.

“[Shen Yun] is beautiful. I really love how the performers are dancing gracefully and so light, they make it look so easy. We’re really enjoying it,” she said at the Venice Performing Arts Center on March 16, 2020.

“It’s beautiful, the overall pictures and how it connects with the digital design and animation. It’s very interesting and very beautiful to look at,” Figueroa added, to explain what her designer’s eye caught in the performance, namely the digitally animated backdrop that is a patented piece of stage technology so visually stunning that it regularly leaves audiences agasp.

Shen Yun’s mission is to revive authentic Chinese culture through the highly-expressive art form of classical Chinese dance and share it with the world. They carry on the tradition of China’s strong belief in heaven and the divine, which formed the basis of Chinese culture for 5,000 years.

Figueroa appreciated and resonated with this soulful aspect of the performance. It moved her heart and even her body.

“I do [resonate with it]. Sometimes I’m, like, moving with them [the dancers]. I’m always like swaying and dancing with them. It’s very beautiful,” she said.

About Shen Yun’s revival of traditional Chinese culture, “it’s very nice to see it live,” she said. “You only read about it in books, you see pictures, but it’s nice to experience it live and see what it was really about.”

Shen Yun’s performers do not only embody China’s spiritual traditions on stage, but they also do so off stage as well. They’ve taken up an ancient spiritual discipline known as Falun Dafa, which includes teachings about how to improve your inner self and strengthen your overall energy.

Figueroa said that energy could be felt coming from the stage, from the performers. “It’s very nice. It’s a good experience so far.”

With reporting by Mary Mann and Brett Featherstone.