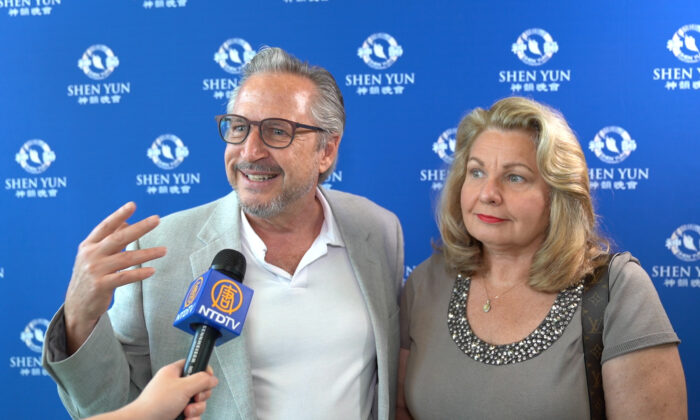 VENICE, Fla.—Chinese people’s struggle to keep their rightful heritage alive is a cause that’s reaching more and more people every day.

Mark Manges is a financial planner with TD Ameritrade who was inspired to attend Shen Yun Performing Arts after reading in The Epoch Times and other media sources about the company’s effort to revive traditional Chinese culture. He learned that the Chinese Communist Party does not allow New York-based Shen Yun to perform in China, and tries to interfere with its performances around the world.

“Well, the traditional values, it’s the core traditional values, I would think, of the Chinese people. But the government is so strange there [in China], I must tell you. You know, in fact, that’s one of the reasons I came here, is to kind of support that … It’s just when the government takes control of people’s bodies and minds, it just gets strange,” he said, referring to the regime’s campaign to eradicate Chinese traditions, which includes abducting and torturing spiritual believers and force them to renounce their beliefs. Shen Yun depicts such scenes, drawn from real life, in its performance.

“But the true culture of Chinese is there [in Shen Yun], and we should all be able to get along as far as that’s concerned, right?” he asked. Mark attended Shen Yun with his wife Arlene at Florida’s Venice Performing Arts Center on March 15, 2020.

Mark and his wife Arlene marveled at Shen Yun’s artistry and the many elements that go into its performance.

“It’s unbelievable, right?” Mark said, “I mean, it’s so precise. Everybody’s dancing so precisely. And there’s such a level of physical—they must have practiced like crazy.”

“And I thought this was actually from China, but it’s from New York,” he added.

Arlene, formerly a financial planner like him before retiring, said, “I love all the bright colors. I love all the dancing. I’ve never seen anyone dance with these long sleeves before, that was amazing—bring them in and out so graceful.”

“And perfectly in sync with each other. I mean, they must be practicing constantly,” Mark said.

Shen Yun performers do not only portray spiritual believers such as Buddhists, Daoists, and Falun Dafa practitioners on stage—they live their lives according to the principles of truthfulness, compassion, and tolerance, which are Falun Dafa’s teachings, and practice its five energy-strengthening exercises. Many audience members say they can feel energy radiating off the stage at a Shen Yun performance.

Mark certainly felt something, at least stirring in his heart. “It’s, it’s awesome. Very exciting. [Shen Yun] was very nice. And I’m usually bored at these things,” he said, adding that recent performances have not held his interest, but that Shen Yun is “my kind of thing. I love the performance. I love the music.”

Mark is actually a musician himself, a percussionist, and so was able to notice something about Shen Yun’s compositions and performers with his expert ear.

The precision of the music along with the dancing was such that Mark first thought it was a recording.

“So I was happy to see that there was a full orchestra down there, with the timpanis,” he said. “It was just perfect. It was wonderful.”

“The dancing and the music,” he continued, “they were so coordinated as well. So you can see there was a very high level of practice and coordination put into this. You know, whoever put it together is brilliant.”

“I love the narration,” Arlene added, “and telling us about each dance and each scene. And I love being told what Shen Yun means: ‘divine beings dancing.’ It’s very profound. I thought it was beautiful.”

Some of Shen Yun’s pieces in a performance depict an ancient Chinese legend about the Creator and his eventual return to earth. Mark and Arlene appreciated this theme in the performance and found close similarities between the Chinese beliefs they learned about and Christianity, their own faith.

Mark and Arlene closed their review of Shen Yun with a hearty recommendation of it to their friends and family.

“I want them to come see [Shen Yun],” Mark said. Arlene called it a must see, and Mark agreed. “Must-see show, right,” he said.