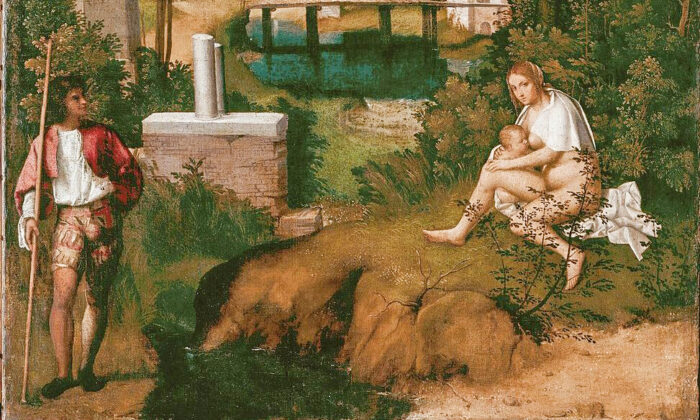 A 500-Year Debate: Giorgione’s ‘The Tempest’

In Mark Helprin’s novel “A Soldier of the Great War,” we meet Alessandro Giuliani, a young Italian studying philosophy and aesthetics. The Great War—World War I—upends his plans for a career as a professor contemplating art and beauty, and we follow him through battles, imprisonment and near execution by his own army, and capture by enemy forces. During these ordeals he meets Ariane, the nurse he quickly comes to love. Thinking she has died in a bombing of the dispensary, he spends the years immediately after the war working odd jobs and trying to mend his psychological wounds.

Oddly enough, a major character in this book is the Italian artist Giorgione’s “La Tempesta,” or “The Tempest,” a painting from the early 16th century. Alessandro is enamored of this mysterious canvas, spends parts of the novel either pondering its meaning or discussing it with others, and eventually, when a museum guard remembers a woman weeping in the gallery in front of “The Tempest,” is reunited with the love of his life.

Because of “A Soldier of the Great War,” I too became fascinated by this painting.

Though popularly known as Giorgione, which means “Big George” or “Tall George,” we know little about Giorgio da Castelfranco’s life. The online site The Art Story gives us the basics of his history. He was born around 1477 in Castelfranco Veneto, about 25 miles from the Republic of Venice. The legend surrounding him proclaims him a handsome man who grew up in modest circumstances and whose mother died while he was still a child. We know too that he succumbed to the plague in 1510 in a Venetian hospital.

Despite his family’s circumstances, he was clearly a painter of singular talent from a young age. He was 13 when he found a place as an apprentice in the studio of master artist Giovanni Bellini. Art historians, including Giorgio Vasari, credit him with changing Venetian artistic techniques, pointing other artists toward the classics and mythology for their subjects, and encouraging an interest in painting landscapes.

Others have also showered him with praise. In 1528, Castiglione, who wrote the classic “Book of the Courtier,” judged him the equal of artists like Raphael and Michelangelo. The 20th-century poet Gabriele D’Annunzio reckoned him “more a myth than a man” and added “no poet on earth has a destiny to compare with his.”

And as critic Ernst Gombrich pointed out, what is most remarkable about these accolades is that only five paintings have been recognized as creations of Giorgione.

One of these is “The Tempest.”

The meaning of “The Tempest” has perplexed critics then and now. Unlike our modernist abstract schools of art, where the viewer must form his own opinions of the meaning of geometric shapes, dripped paint, or minimalist images, “The Tempest” offers realistic human figures—a man with a staff in his hand and a nearly naked mother breast-feeding her baby—occupying a green space beneath two windswept trees, while in the background a river leads our eyes into a city beset with lightning bolts and turbulent clouds.

But who are they? Why are they there? And what is the meaning of the storm over the town?

Why does the woman wear only a light shawl? Why is she looking directly at us? And who is the man studying her? Is he a husband, a lover, or a passer-by who has stumbled across a scene of beauty and motherhood? We’re not even sure of his profession. In his online article, art historian James R. Jewitt explains that some believe him to be a shepherd, some a soldier, and some an actor as “his multicolored hosiery and fancy jacket correspond to theatrical costumes of Venetian ‘Compaignie della Calza’ (Confraternities of the Sock), who often staged plays with rustic countryside settings resembling Giorgione’s landscape.”

Some contend that the man and woman represent Adam and Eve, cast out from Paradise, which in symbolized by the storm-torn city. Other students of art and history believe that “The Tempest” is Giorgione’s comments on the politics of his day, when the region was under siege during the War of the League of Cambrai.

Still others hold that the artist had no specific meaning in mind at all, that he painted with the intention of allowing viewers to formulate their own interpretations, or that he offered us a fantasy without a clearly defined subject. Jewett writes: “In this line of reasoning, with ‘The Tempest’ Giorgione invents the Renaissance genre of ‘poesia’ (pl. ‘poesie’). This mode of painting aspires to the highly lyrical and musical qualities of verse, and resembles visual poetry meant to generate multi-layered responses.”

The romantic in me likes Mark Helprin’s interpretation in “A Soldier of the Great War,” where Alessandro tells Ariane: “They say, what could it mean, a woman with a child, disrobed, and the soldier, standing apart from her, disconnected. But I know exactly what to make of it. … He intended to praise elemental things, and to show a soldier on the verge of return. I’m not surprised that scholars and critics don’t understand it. Giorgione lived in the time of the plague, and the scholars and critics, for the most part, have had to do without plague or war, which make the simple things one takes for granted shine like gold. What does the painting mean? It means love. It means coming home.”

Entranced by a Conundrum

Unlike some people I know, I like mysteries. Whether being mystified by a woman’s thoughts and actions or by the miracle of this globe spinning through space, I don’t need answers to every question confronting me.

“The Tempest” stays in my head precisely because of its mysteries. Every time I look at this painting, different interpretations occur to me. What does that expression on the woman’s face mean? Does she consider those of us looking at her as intruders? Is that man a soldier or a pilgrim or a member of some Venetian acting guild? What is that contraption in the center of the painting that to my eye, as a guy raised in North Carolina, looks like the barbeque grills I saw all over town as a kid? Why is a naked woman breast-feeding her baby on a rock? Why does the man pause to look at her? Is he entranced with her beauty or are they family?

Instead, a painting, a sculpture, or a poem can raise questions and fire up the imagination. Like the day at sunrise, the laughter of my grandchildren, or a woman’s face by candlelight, great art can create a sense of wonder and curiosity.

Which is why, three or four times a year, I revisit Giorgione’s “The Tempest.”