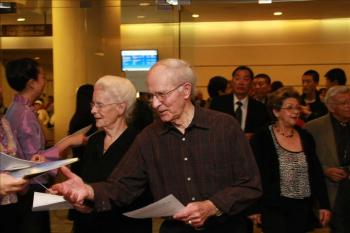 Audience members wait in the lobby before the start of the Mid-Autumn Spectacular the John Bassett Theatre in Toronto. (Victor Chen/The Epoch Time)
Arts & Culture

Hospital Director Got ‘taste of Chinese culture’ in ‘Mid-Autumn Spectacular’

The opening Mid-Autumn Spectacular show at Toronto’s John Bassett Theatre on Wednesday left theatre-goers basking in the afterglow of having experienced the essence of China’s traditional culture.

Members of the local business community expressed their appreciation after watching the New York-based Divine Performing Arts perform before a packed house.

Michael Stewart, a director at St. Michael’s Hospital, echoed the sentiments of many other audience members, describing the show as “very good” and saying he had never seen anything like it.

“It’s a pretty good taste of Chinese culture,” he said.

Mr. Stewart said he enjoys Chinese food so much his friends told him he should learn the language. He came to the Spectacular as part of his effort to immerse himself in the culture.

During the intermission, Mr. Stewart said his favourite performances so far were two dances depicting Chinese legends that he was already familiar with.

He also enjoyed the piece by soprano Pi-Ju Huang and Drummers of the Tang Court, a dance featuring male dancers thundering across the stage pounding Tang dynasty era drums.

He said the mix of Western and Chinese instruments in the orchestra worked well and was “pretty impressive.”

“They’ve done a pretty good job because you can hear the Eastern and it is blended with the Western.”

The Mid-Autumn Festival is one of China’s most ancient and cherished holidays. The Spectacular expresses Chinese classical dance and showcases authentic traditional Chinese culture. Through background scenery, costumes, and choreography, the Spectacular expresses truthfulness, compassion, and pure beauty. China’s history comes to life in this gorgeous performance that is entertaining, inspiring, and uplifting. The show’s content is presented in both Chinese and English. For more information, visit DivineShows.com/Toronto .