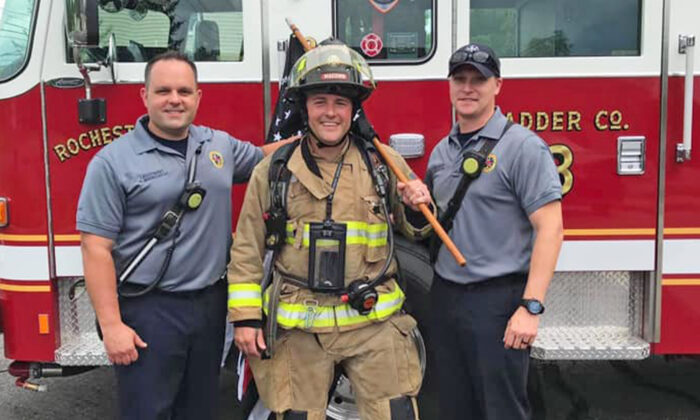 A firefighter has helped raise over $52,000 after embarking on a 140-mile trek by foot across the state of Michigan to aid fellow firefighters battling cancer and their families.

However, this was not the first time Warne, who has been a firefighter for the past 11 years, has set out on foot to raise awareness for cancer. Last year he learned that cancer was among the biggest killers of firefighters, and thus he decided that he wanted to do something to help his own.

“My brothers and sisters are contracting this horrid disease faster than anyone else,” Warne said in an interview in 2019 with Macomb Township Chronicle. “The number one cause of firefighters’ line of duty deaths now is cancer.”

“We got to do something really stupid to bring awareness to this,” Warne told WWMT. “I can walk across the state in my bunker gear.”

This is actually how the idea of Walk for the Red 140 was born. The walk is promoted by Neighbors United, a nonprofit organization founded by Warne himself that consists of people who are dedicated to supporting individuals and families who are down on their luck and might need some extra help.

“We had no idea the love and support and compassion that the people of the state of Michigan would show us, and it was incredible and very motivational and inspirational to see it,” Warne told.

However, after the grueling walk last year, Warne thought he wouldn’t go for one this year. But when his newly retired captain was diagnosed with lymphoma, and upon witnessing the positive success of last year, it fueled the desire in Warne to make it an annual event.

The money that is raised by walking is donated to firefighters and their families who have been diagnosed with cancer. It can also be used to pay for their treatment, house payments, or funerals in case the firefighter loses their battle to cancer.

“If we can ease some of that burden that would be fantastic,” Warne said.

For those who have been curious to know how Warne prepared for this year’s 140-mile walk, he told WWJ that he had walked a lot more and trained with weighted waists and ankle weights. Additionally, he had also been walking quite a bit with his gear during shifts, which helped him.

On completing this year’s walk, Warne took to Facebook and expressed his gratitude to all the people who came out to lend their support.

“Thank you for all the love and support over the last 4 days. You all were amazing. We had a great team of people and pace crew,” Warne wrote. “These four days once again showed the love and compassion we have for our fellow man and woman.”

Additionally, Warne thanked the survivors of cancer and the people they assisted to show up on the last day and walk with them.

According to an update by Neighbors United on Oct. 22, the team ended up surpassing their goal and raising $54,000. However, the organization clarified that they would only use $52,000 this year for 18 firefighters battling cancer and carry forward $2,000 for next year’s walk.

“Every firefighter will receive over $2800 in the next few months,” Neighbors United stated.

As of Oct. 27, Neighbors United has already presented their check to two firefighters battling cancer.