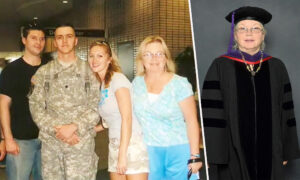 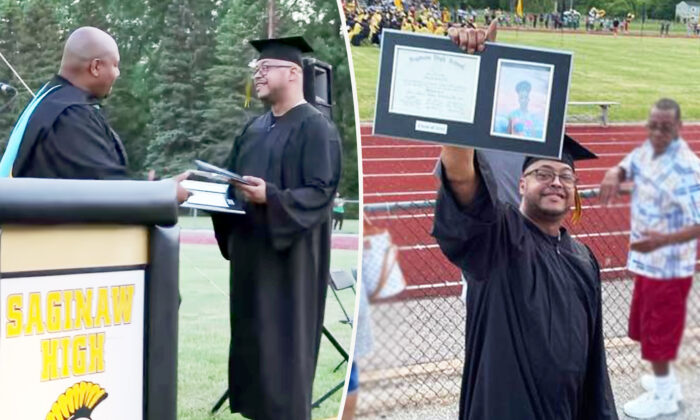 Michigan Dad Accepts Late Son’s High School Diploma: ‘It Was Such an Honor and Privilege’

It was a somber moment for one family from Michigan during a recent high school graduation ceremony in which the father accepted his late teen son’s diploma.

Donald Perry Jr., from Saginaw, was only 17 years old when he was killed in a tragic road accident in November 2020. At the time of his demise, he was a senior student at Saginaw High School.

During the commencement ceremony at Saginaw High on June 3, his father, Donald Perry Sr., received the diploma on on his behalf.

“It was such an honor and privilege to be able to walk in my son’s footsteps and also emotional but I knew he was looking down on me and guiding me through each step I took,” Donald Sr. told The Epoch Times via Facebook Messenger. “[He] gave me the strength to keep it together and hold back the tears that were wailing inside of me trying their hardest to get out.”

The father also expressed his gratitude to the school for the opportunity to be able to collect his son’s diploma, according to WNEM TV.

Donald Jr. had earned a nickname from his friends at school long before his passing.

“They called him Mr. Perfect because a lot of them really admired him because he was a humble person really and he had a great smile on his face all the time,” LaTosha, Donald Jr.’s mother, said.

After the graduation ceremony, the Perry family and friends gathered around Forest Lawn Cemetery in his memory and released balloons in the air.

“It’s a bitter but sweet thing, I hate that he’s not able to be here,” said Donald Sr.

He added that, during his high school days, Donald Jr. had a dream of attending college to study electrical engineering as a major and real estate as a minor.

The Perry family noted that Donald Jr. had a promising future and that his graduation could have marked a major milestone in his life.

Though the young man’s dreams were cut short at such tender age, his family and the school found a way to honor him.