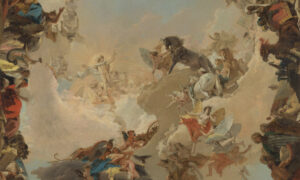 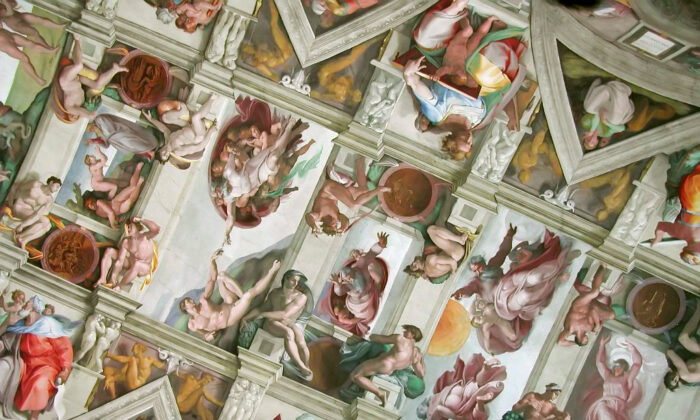 The ceiling of the Sistine Chapel designed and painted by Michelangelo. (Public Domain)
Fine Arts & Craftsmanship

The Story of Art: What we can learn from the lives of artists
By Eric Bess
biggersmaller
Print

Michelangelo Buonarroti is undeniably one of the greatest artists in history. He was born in 1475 and lived until the ripe age of 88. He considered himself primarily a sculptor, but he also produced some of the greatest fresco paintings, architecture, and poetry of the Italian Renaissance.

What made Michelangelo great? What was his secret to creating so many great works of art? I’m sure the answer to this question is quite complex, but we will look at an episode from Michelangelo’s life along with his own response to the question.

Michelangelo is quoted as saying the following about his work ethic:

“If people knew how hard I had to work to gain my mastery, it would not seem so wonderful at all. … If you knew how much work went into it, you wouldn’t call it genius.”

Michelangelo suggested that his mastery was not indicative of the type of genius based solely on innate talent. Instead, he referred to his “genius” as “eternal patience.” Genius is the ability to practice patience during the unavoidable difficulties that arise in working hard at one’s craft. In other words, the idea of genius appears to be synonymous with one’s ability to endure hardship for love of the art.

Vasari wrote about some of the extremes that Michelangelo would go through for the sake of his craft:

“Michelangelo told me that in his youth he often slept with his clothes on, just like a man who, exhausted by his work, does not bother to undress, since later on he must get dressed once again. … As he grew old, he constantly wore boots fashioned from dogs’ skins on his bare feet for months at a time, so that when he later wanted to remove them his skin would peel off as well.”

Vasari’s story about Michelangelo is extreme and may even be apocryphal. Yet it shows that we must be willing to sacrifice our comforts and endure hardship if we wish to push ourselves to greatness.

Overcoming the Difficulties of the Sistine Ceiling

One of the works of art that reaffirms Michelangelo’s greatness is the ceiling of the Sistine Chapel.

Michelangelo was working on sculptures for Pope Julius II’s future tomb when the pope decided that he wanted him to paint the ceiling instead. Vasari suggests that the artist and architect Donato Bramante, a friend of the young painter Raphael, convinced the pope to have Michelangelo paint instead of sculpt.

Bramante swayed the pope in the hopes of preventing Michelangelo from creating more great sculptures. He also hoped that Michelangelo would fail at painting and show that Raphael was a superior painter and artist.

Michelangelo protested and claimed that he was a sculptor and not a painter, but Bramante had already convinced the pope. According to “Michelangelo: The Artist, the Man, and His Times” by William Wallace, Michelangelo expressed his discomfort with the paintings when the project was completed, signing the bottom of a sonnet expressing his displeasure with: “I’m not in a good place, and I’m no painter.”

The fresco itself also had its issues. Michelangelo didn’t know how to paint fresco correctly, so he requested other artists to come and help him. Mold grew on one of the frescoed areas, and Michelangelo had to repaint it.

To possibly sabotage the project again, Bramante suggested that Michelangelo should hang scaffolding from the ceiling. Michelangelo protested, claiming that the holes in the wall would have to be covered later. He had to invent a new type of scaffolding.

According to Vasari, the act of painting the ceiling was a very painful experience, to say the least:

“These frescos were done with the greatest discomfort, for he had to stand there working with his head tilted backwards, and it damaged his eyesight so much that he could no longer read or look at drawings if his head was not tilted backwards; his condition lasted for several months afterward.”

Wallace suggests that the pope’s payments for Michelangelo’s work were very irregular, and most of the money he received he sent to his family. He described himself as “barefoot and naked.”

Michelangelo described the whole event in multiple letters, which Wallace quotes and that can be summed up:

“I am living here in a state of great anxiety and of the greatest physical fatigue: I have no friends of any sort and want none. I haven’t time enough to eat as I should. So you mustn’t bother me with anything else, for I could not bear another thing. … And thus have I lived for some fifteen years now and never an hour’s happiness have I had.”

Enduring What Is Unendurable

That’s not all. You work on the project so much that your body aches when you go home. And when you do go home, your spouse complains about money, your parents are sick and need your help, and your kids are disrespectful at school. You work such late hours that you barely have time to change clothes.

Such daily hardship is overwhelming to just imagine it, let alone live it.

But Michelangelo did live it and persevered through it. And this is why, at least in part, he was great. Because of his perseverance, he created some of the greatest works of art known to the world. He could’ve quit at any time, but he didn’t. He was only 37 years old when he completed the Sistine ceiling and would live another 51 years.

Sometimes, our struggles can make life seem meaningless; our hardships can be so overwhelming that we want to find a hole in which to hide from pain. But, if we take any wisdom from Michelangelo’s story, maybe our “greatness” depends on confronting life’s hardships with “eternal patience.”

Perhaps each hardship is an opportunity to learn about ourselves and our true potential.