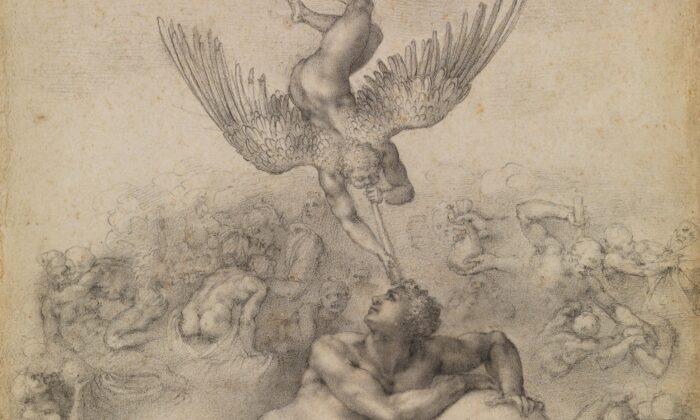 A gift between heaven and earth
By Eric Bess

Around 1533, the Italian Renaissance artist Michelangelo produced a series of drawings that he gave to his close friends. At the time, drawings were typically produced as sketches for larger works. These drawings, however, were produced as finished products to be given as gifts.

In her article “Michelangelo’s Dream,” Maria Ruvoldt suggests that this is one of the first times in history that a drawing was completed for its own sake. Drawings that served as sketches for larger works were usually completed at the behest of patrons, like the Medici family or the pope, who were interested in specific representations of humanist or religious subject matter.

Ruvoldt suggests, however, that the “ostensible privacy and intimacy of this new form allowed for a unique degree of freedom of invention and interpretation,” and this allowed Michelangelo to produce an image “to be meditated upon, a work whose pleasure derives from its endless unfolding of meaning, affording the viewer delight in returning to it again and again.”

Michelangelo produced an interesting and creative scene. A male, nude figure sits on a box that contains masks of different facial expressions. He leans on a sphere, turns his head away from his body, and looks up toward a winged spirit who, mid-flight, blows a trumpet toward the figure’s head.

Around this central scene is a halo of figures interacting with each other, yet drawn softly so as not to interfere with the focal point of the central pair of figures. Some of these side figures are embracing and kissing, whereas others are fighting and fleeing. Floating heads abound, and a pair of hands appear to hold a money pouch.

The Courtauld Institute of Art website suggests that this drawing “shows a youth being roused by a winged spirit from the vices that surround him.”

The philosopher and theologian Thomas Aquinas helped influence the Italian Renaissance understanding of cardinal vices. The seven vices or sins are pride, greed, lust, envy, gluttony, anger, and sloth. The depicted figures surrounding the central figures do display some elements of these sins.

But how is Michelangelo responding to these sins? Does he present a simple renunciation of vice, or is something else steeped in his intention?

The winged spirit appears to come straight down from the sky with its trumpet aimed right at the area of the forehead above the brow. Why does the winged spirit aim its trumpet here of all places? Is it aiming at the mind, soul, or body? What is important about this specific place?

Let us consider Marsilio Ficino. Marsilio Ficino was a neoplatonic philosopher who was head of the Platonic Academy at the Medici villa during the Italian Renaissance. Michelangelo attended this academy as a young teenager and was influenced by Ficino’s neoplatonism.

Ficino suggested that the soul served as an intermediary between heaven and earth, possessing aspects of both the heavens above and the earth below. For example, the soul moved in time and space but reflected on eternal and incorporeal ideas and ideals.

It was possible, however, for the soul to be overwhelmed by the body through which it communicated. Being overwhelmed, the soul would forget its divine connection to heaven.

Let’s return to the drawing at hand. Is the winged figure aiming its trumpet at the intermediary between heaven and earth—the soul?

What about the box with the masks underneath it? These masks have different expressions on them and are ready to be, but are not being used. Must we put away the masks we wear in day-to-day life in order to get closer to the truths of our own souls? Or, if we are to hear the sounds of heaven, must we remain unbothered by the sentiments and opinions that would contort our faces?

What about the blank globe on which the figure leans? Does it represent the earth on which we live? Is it a blank earth waiting for us to imbue it with the heavenly images and sounds produced by the soul? Or does it represent empty temptations and earthly pleasures that we must turn away from in order to remember the divine part of ourselves?

The halo of figures engaging in vices doesn’t seem to actually be present. The figures seem to exist ephemerally, as if at any moment they will disappear into the mistiness of the background. Yet they are there and are presented like nagging thoughts that refuse to disintegrate.

Are these earthly vices what the soul must leave behind if it wishes to regain its role as intermediary between heaven and earth, or is the dissipation of these vices dependent on heavenly intervention? In other words, does heaven’s trumpet scare the vices away, or must the soul choose to divorce itself from vice in order to hear the trumpet?

These are big questions packed into this small drawing. Most of them do not have an absolute answer, irrespective or whether they are asked in relation to the drawing or not.

I think this is what Ruvoldt means when she says that “The Dream of Human Life” is a work “to be meditated upon, a work whose pleasure derives from its endless unfolding of meaning, affording the viewer delight in returning to it again and again.”