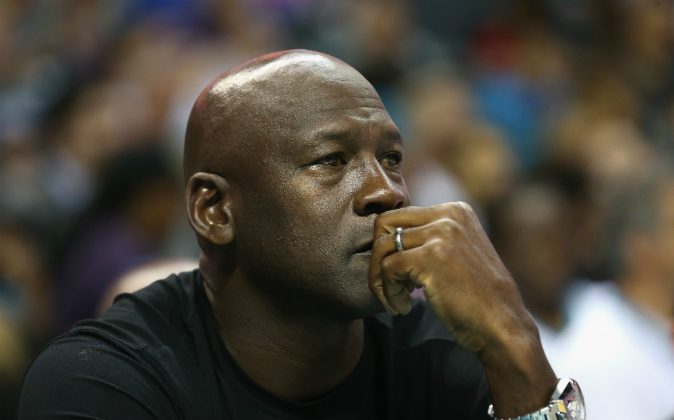 Owner of the Charlotte Hornets, Michael Jordan, watches on during their game against the Atlanta Hawks at Time Warner Cable Arena on November 1, 2015 in Charlotte, North Carolina. (Streeter Lecka/Getty Images)
Life & Tradition

Michael Jordan on Shootings of Blacks, Police: ‘I Can No Longer Stay Silent’

During his time as a high flying basketball phenom, Michael Jordan remained silent on social and political issues.

Now, though, Jordan is donating $2 million toward efforts to bridge racial divides.

And along with the pledge of money, Jordan penned a personal missive entitled “I Can No Longer Stay Silent” for sports website The Undefeated on July 25.

Jordan began by recalling the death of his father nearly 25 years ago. James Jordan, suffered a gunshot wound to his chest and was later found in a South Carolina creek. Jordan went on to address the killings of black men by law enforcement and the subsequent retaliations on police officers.

“I grieve with the families who have lost loved ones, as I know their pain all too well,” Jordan wrote.

“I was raised by parents who taught me to love and respect people regardless of their race or background, so I am saddened and frustrated by the divisive rhetoric and racial tensions that seem to be getting worse as of late. I know this country is better than that, and I can no longer stay silent. We need to find solutions that ensure people of color receive fair and equal treatment AND that police officers—who put their lives on the line every day to protect us all—are respected and supported.”

The retired NBA star and Charlotte Hornets owner has decided to pledge $1 million to the Internal Association of Chiefs of Police’s Institute for Community-Police Relations and another $1 million to the NAACP Legal Defense Fund. The donations will help programs that foster a sense of trust between communities and law enforcement.

Jordan concluded his essay, “We are privileged to live in the world’s greatest country—a country that has provided my family and me the greatest of opportunities. The problems we face didn’t happen overnight and they won’t be solved tomorrow, but if we all work together, we can foster greater understanding, positive change and create a more peaceful world for ourselves, our children, our families, and our communities.”

A wave of professional athletes have spoken out against racial divide and the tragedies that has commonly ensued. During the 2014-2015 NBA season, players such as LeBron James of the Cleveland Cavaliers and Derrick Rose, formerly of the Chicago Bulls donned “I Can’t Breathe” t-shirts to bring light to the death of Eric Garner. Garner died after he was placed in a chokehold by Staten Island officers.

At this year’s ESPYs, NBA players Carmelo Anthony, Kyrie Irving, Chris Paul, and James spoke out against the recent shootings of Alton Sterling and Philando Castile as well as the ambush killings of five Dallas police officers.

“The events of the past week have put a spotlight on the injustice, distrust and anger that plague so many of us,” said Anthony. “The system is broken. The problems are not new. The violence is not new. And the racial divide definitely is not new. But the urgency to create change is at an all-time high.”

Jordan is the father of two adult sons, Marcus and Jeffrey Michael.